At 2150 GMT on 22 June 2022, two communications satellites MEASAT 3D and GSAT-24 were successfully launched on the first Ariane 5 launch of 2022. Before the launch of the Ariane 5 ECA+ had been delayed by 47 minutes by ground systems issues at the launch site in French Guiana. MEASAT 3D was placed in a Geosynchronous Transfer Orbit (GTO) at T+29 minutes. The SYLDA dual-payload adapter which separated the payloads was jettisoned soon after at T+31 minutes. GSAT-24 was successfully deployed at T+42 minutes into its own GTO. 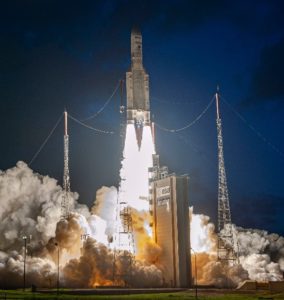 MEASAT 3D is a telecommunications satellite built by Airbus Defence and Space (Airbus DS) for the Malaysian satellite operator MEASAT. This new telecommunications satellite which will operate from a Geostationary Earth Orbit (GEO) once it has arrived there, will enhance broadband speeds of up to 100 Mbps in areas with limited or no terrestrial network throughout Malaysia. It will also provide additional capacity for video distribution in HD, 4K and eventually 8K in the Asia-Pacific region. MEASAT 3D has an expected operational life of 19 years.

GSAT-24 is a Ku-band communications satellite built by the Indian Space Research Organisation (ISRO). This satellite will provide high-quality television, telecommunications and broadcasting services to its Indian customers, again from GEO. GSAT-24 is configured on ISRO’s I-3K (I-3000) bus and has an expected mission life of 15 years.