The West Coast launch site of the United States of America, Vandenberg Air Force Base, hosted its first interplanetary mission on 5 May, at 1105 GMT. The mission saw a ULA (United Launch Alliance) Atlas V 401 carrying the NASA InSight Mars lander, and two CubeSats which will accompany the lander to the Red Planet. The spacecraft are expected to reach Mars later in the year, at the end of November, with the planned InSight lander touchdown in the Elysium Planitia region to occur on 26 November. The two “MarCO” (Mars Cube One) CubeSats – which are travelling independently of the lander – will, if they survive the journey, perform a fly-by of Mars but will likely be unable to enter orbit of the planet.

The Atlas V 401 lifts off from foggy Vandenberg Air Force Base carrying the NASA InSight lander and MarCO spacecraft. Courtesy of NASA 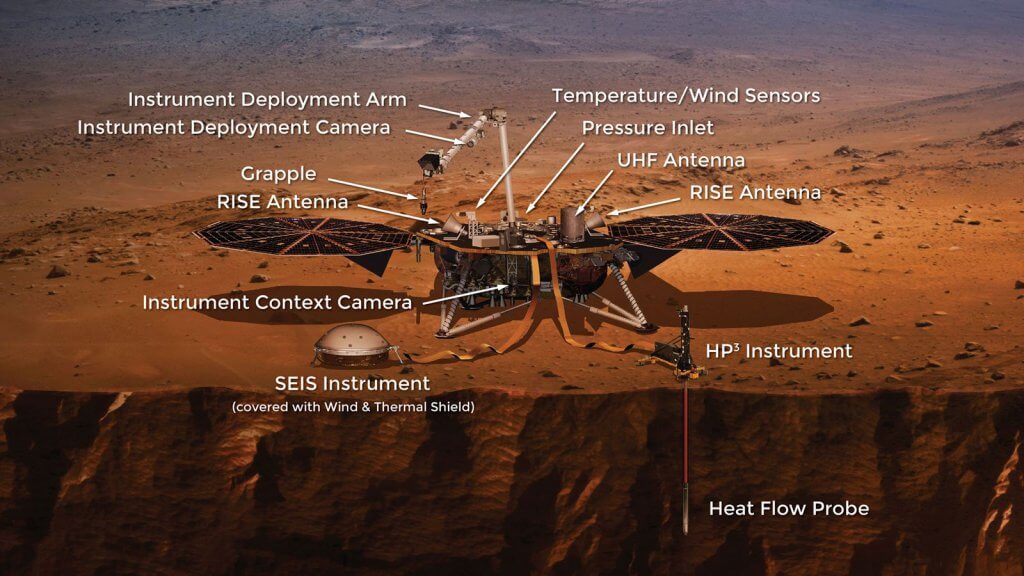 A diagram showing the InSight lander on Mars with key components labelled. Courtesy of NASA JPL

Payloads supplied by the European partners include the two primary research instruments: the SEIS (Seismic Experiment for Interior Structure) Instrument led by CNES, which will monitor the Martian surface for “Marsquakes” alongside meteor impacts and even gravitational influence from the planet’s largest moon Phobos, and the HP3 (Heat Flow and Physical Properties Probe) Instrument built by the DLR with input from the Polish Academy of Sciences, which will tunnel into the planet’s surface to detect any internal heat released from the interior.

In addition to these major instruments, the ASI has proved the LaRRI payload. This is a Laser Retroreflector, which will enable future orbiting missions to detect the exact location of the lander to very high degrees of accuracy.