With more than a tad of embarrassment, NASA Administrator Jim Bridenstine had to admit that the first launch of the first commercial crew-carrying spacecraft, Boeing’s CST-100 Starliner, had not gone to plan. While the spacecraft was launched as planned to a near orbital velocity by a ULA-operated Atlas V N 22, a mission event timer issue meant that the orbital injection was delayed and the subsequent rendezvous with the International Space Station (ISS) could not take place. The launch was made in an eastward direction at 1136 GMT from Cape Canaveral, Florida, on 20 December 2019. 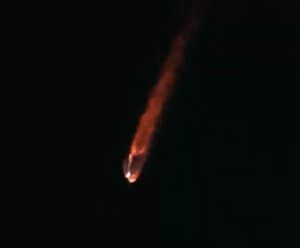 Starliner was meant to fire its Aerojet Rocketdyne OMAC thrusters at 1207 GMT to achieve insertion into a stable orbit, but due to the software timing error this did not occur on time. The master event timer was supposed to receive initial reading data from the launch vehicle, but a software error meant that this was taken from an incorrect memory location on the rocket, resulting in an 11-hour error. An emergency burn and subsequent burns were ordered but even this was delayed due to the expected TDRS communications relay blackout period.

Because of the timing issue the spacecraft’s reaction control system was fired multiple times to keep the vehicle in an insertion-burn attitude, using up propellants – even though the orbit insertion burn by four OMAC thrusters had yet to take place. While this burn did eventually happen, propellant exhaustion meant the spacecraft could not reach the altitude of the ISS orbit and the rendezvous had to be called off. The spacecraft was left in a 221 x 180 km orbit at 51.6 degrees inclination.

This partial launch failure in effect negated the middle one of the three main aims of the mission: to launch successfully; to approach, dock and undock with the ISS successfully; and to re-enter and land successfully. It is not thought that the flight was directly insured.

Update on 24 December 2019: Starliner made a successful re-entry and landed at the White Sands Missile Range in New Mexico at 1258 GMT on 22 December 2019. 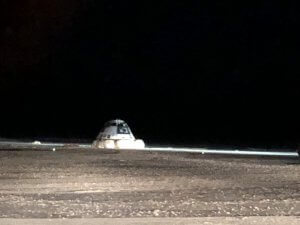 Further Update on 6 January 2020:  Boeing’s CEO Dennis Muilenberg has resigned after this latest engineering failure by Boeing. Muilenberg was already under pressure due to engineering/cost overrun problems with some of its military programmes, but most especially due to the suspension from flight operations of the Boeing 737 Max after its control system was found to be fault in two fatal air accidents.  Boeing’s chairman David Calhoun takes over as CEO, with his Chairman role now being taken over by non-executive Lawrence Kellner.

Update on 10 February 2020: Boeing revealed that software used to control thruster firings for separation of the service module from reentry module had been set for the wrong phase of flight. Had the problem not been found and fixed in time, a collision would have occurred.

A launch here, a launch there