While the SLS Block I variant is nearly certain to achieve flight status, new heavy-lift rockets on the block threaten to usurp later variants of this huge US$20 billion Heavy Lift launch vehicle (HLV). Nevertheless, during the Heads of Agencies’ press conference, NASA’s new administrator, Jim Bridenstine, was adamant in declaring that SLS and the Orion human-carrying spacecraft would survive the onset of new commercial HLVs and suggested that the SLS would work in cooperation with them. 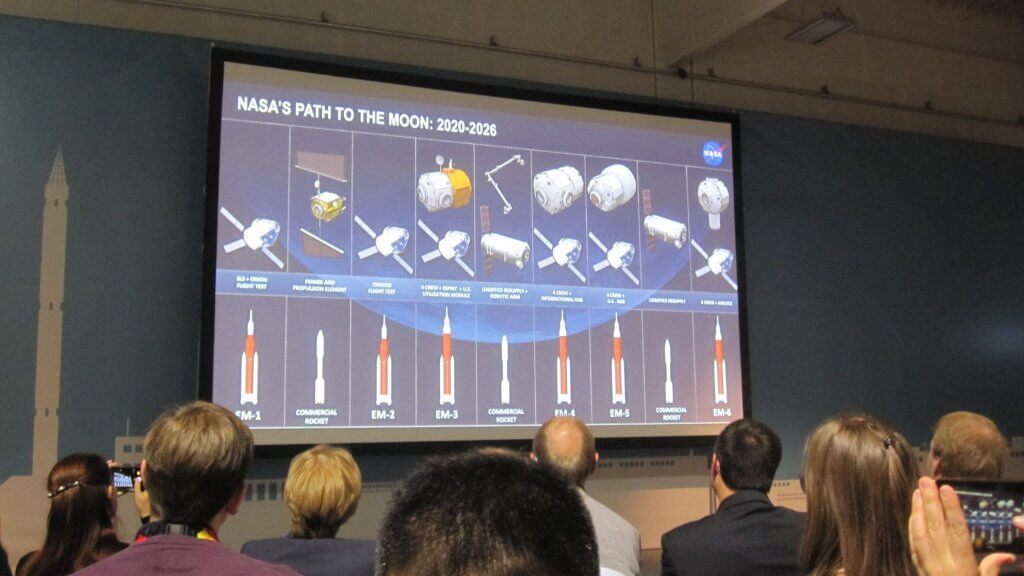 In fact, NASA’s Lunar Gateway construction plans specifically include “commercial launches” in its schedule, as shown in the paper presented by NASA’s Jason Crusan (IAC-18.A5.1.1).

After some setbacks, the SLS programme is back on track. Steve Creech, SLS Strategic Development Manager, revealed that the main LOx (liquid oxygen) tank for the 26 metric ton, TLI capable SLS Block I would be ready early next year, while the liquid hydrogen tank would be ready by the autumn.

With respect to other choke points on the critical path in the SLS/Orion schedule, Nico Dettman, head of the exploration group at ESA, said some design changes would be made to the service module between the unmanned Orion EM-1 mission, currently planned for 2020-21, and the crewed EM-2 mission in 2022. He noted however that the former flight would be more forgiving in its requirements given its uncrewed status.

Oliver Juckenhofel, head of on-orbit services and exploration at Airbus DS, said t would include mass reduction measures and some new upgraded electronic components. He suggested that the new X-wing solar array configuration had a few advantages over the “Mickey Mouse” designs originally envisaged by Lockheed Martin, mainly that the stress-reducing flexible joints would allow them to bend backwards during manoeuvres.

The lift capabilities of SLS variants as planned. Courtesy: NASA

With respect to later versions of the SLS, NASA has just reopened negotiations with Boeing to optimise the design of the EUS to further extend the 34-36 metric ton TLI (Trans Lunar Injection) capabilities of the now delayed SLS Block IB. This will not now fly until the fourth SLS mission at the earliest. The final and most powerful SLS Block II version, which able to carry 150 metric tons to LEO using the EUS as well as new advanced boosters, will not now be needed until the 2030s.

The late arrival of the EUS resulted in the SLS having to fly in a Block I configuration using its Delta IV rocket derived Interim Cryogenic Propulsion Stage (ICPS) for both the first and second SLS flights, the latter of which is the first human carrying EM-2 mission meaning that the SLS Block I has had to be human-rated after all.

The third SLS Block I flight after EM-1 and EM-2 will be an unmanned “cargo” mission as it is due to launch the scientific probe, the Europa Clipper, in 2022 at the earliest.  This science mission to Jupiter’s icy moon, very much benefits from the power of the SLS in allowing it a more direct flight trajectory, thus saving years in flight time.

While the ICPS could be stretched further, according to NASA’s ICPS specialist Dr Kimberley F. Robinson, NASA is currently planning to make just “performance tweaks” to it. These will add a metric ton or two to its lifting performance which will benefit the Europa Clipper mission’s flexibility. Presenting the IAC-18.D2.9-A5.4.1 paper in lieu of Steve Creech, Robinson said that these minor improvements could be done without having to recertify the stage, whereas a full propellant tank stretch would definitely need this.

Comment by David Todd:  While the future of the Block I version of the SLS is assured (at least for the three or possibly four flights for which it has already has RS-25D engines), the same cannot be said for the SLS Block IB. By delaying the EUS upper stage, NASA and its Boeing partners can give the SLS Block IB slightly more payload via an EUS redesign which would be useful for the construction of the Lunar Gateway. However, this move also allows a much easier cancellation of the EUS and SLS Block IB version (and later SLS Block II) should NASA wish to do so. This might happen if commercial heavy lifters such as the Blue Origin New Armstrong and the SpaceX BFR show that they are likely to work.

By the way, one alternative to the SLS Block IB with its EUS would be to further upgrade the SLS Block I. During the early design studies of the SLS, analyses of different engine and configuration options for the upper stage showed that one possibility would be to stretch the tanks of SLS Block I’s ICPS. This would get it close to the 34-37 metric ton TLI performance of the EUS equipped SLS Block IB.

The days of the later SLS Block IB and Block II variants could, therefore, be numbered and they may remain as just “paper designs”. Nevertheless, for the time being, the SLS Block 1B remains integral to the Lunar Gateway plan.