There are many space conferences every year, some specialising in military space hardware and applications, some aimed squarely at the commercial market, but when it comes to international space flight – and especially space agencies – there is perhaps only one important one: the International Astronautical Congress (IAC). 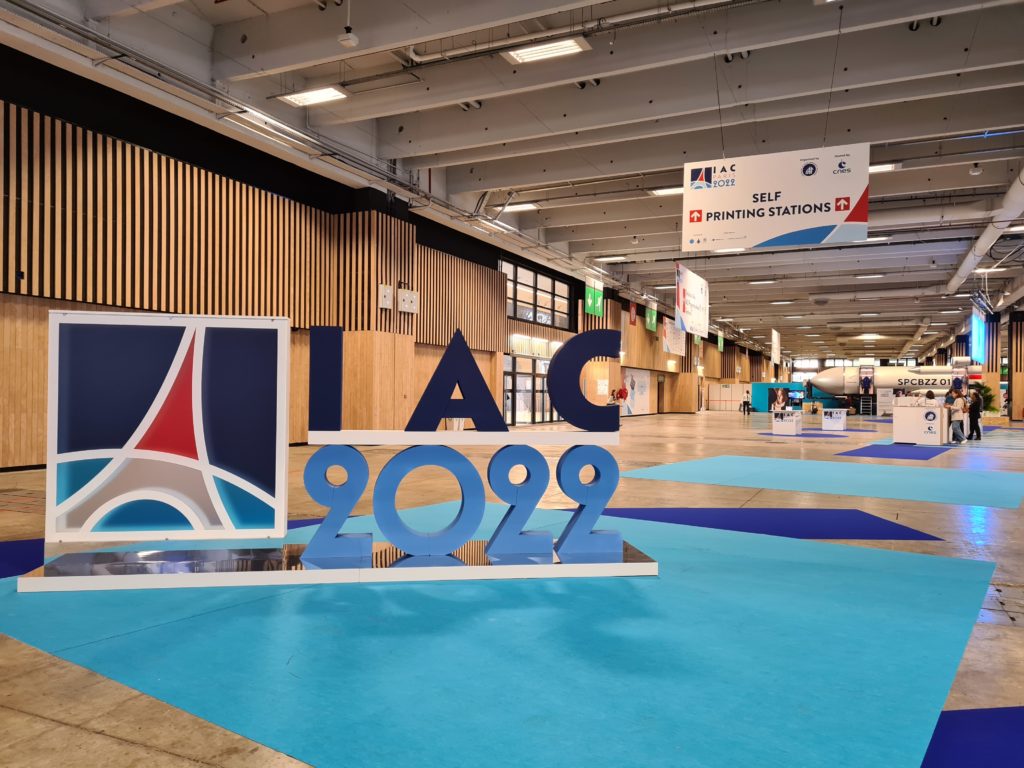 Attendees enjoyed group selfies at the entrance to the IAC 2022 in Paris, France. Courtesy: Seradata/Farah Ghouri

Organised by the International Astronautics Federation (IAF), the show takes place every year in a different city. Like the Olympics, cities compete to host the show. After Dubai hosted it last year, and with a remote conference forced on the IAC by the pandemic the year before, this year it was the turn of Paris (the IAF home city) to host IAC. And a busy one it was, with hundreds of exhibition stands and over 9,300 claimed attendees – a new record for the conference now in its 73rd year.

The event kicked off with an opening ceremony featuring breakdancing, a live band (composed mostly of IAC attendees) and a wholesome – but somewhat dull – portrayal of a young girl’s fascination with space as she grows up. As usual, there was much self-congratulating on the event and the space sector in general. What was less expected was a guest appearance by the Prime Minister of France, Élisabeth Borne. In a speech given entirely in French (an audio translation was accessible by a link but only a handful of attendees appeared to have their earphones in), Borne announced that the French government will designate more than €9 billion (US$9 billion) for space activities over a three-year period – around 25 per cent more than the funds allotted for the last three years. Très bien – it was a pretty pleasant start for the hosts of IAC. 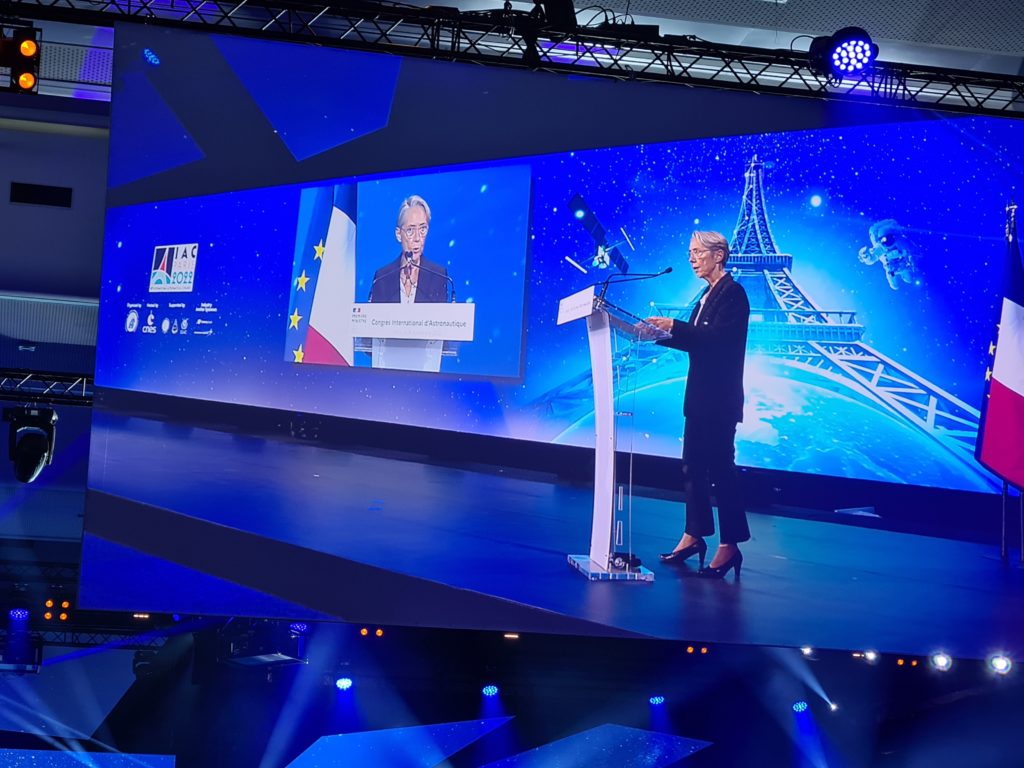 Heads of Space Agencies Plenary: international co-operation in theory, but in practice?

After the opening ceremony came the heads of space agencies plenary session, which drew the largest audience. The panel included officials from NASA, the European Space Agency (ESA), the Canadian Space Agency (CSA), the Japan Aerospace Exploration Agency (JAXA) and the Indian Space Research Organization (ISRO). It didn’t take long for an audience member to ask why, if the motto for the 73rd IAF was “Space4all”, were China and Russia missing from the panel? The question was submitted anonymously through Slido, a Q&A app first adopted by the IAC during Covid-19, but it was clearly on many people’s minds: over 70 people “upvoted” it, making it the most popular question. However, the panel moderators deftly avoided the question and it was only later in a press conference that the elephant in the room was – partially – addressed. 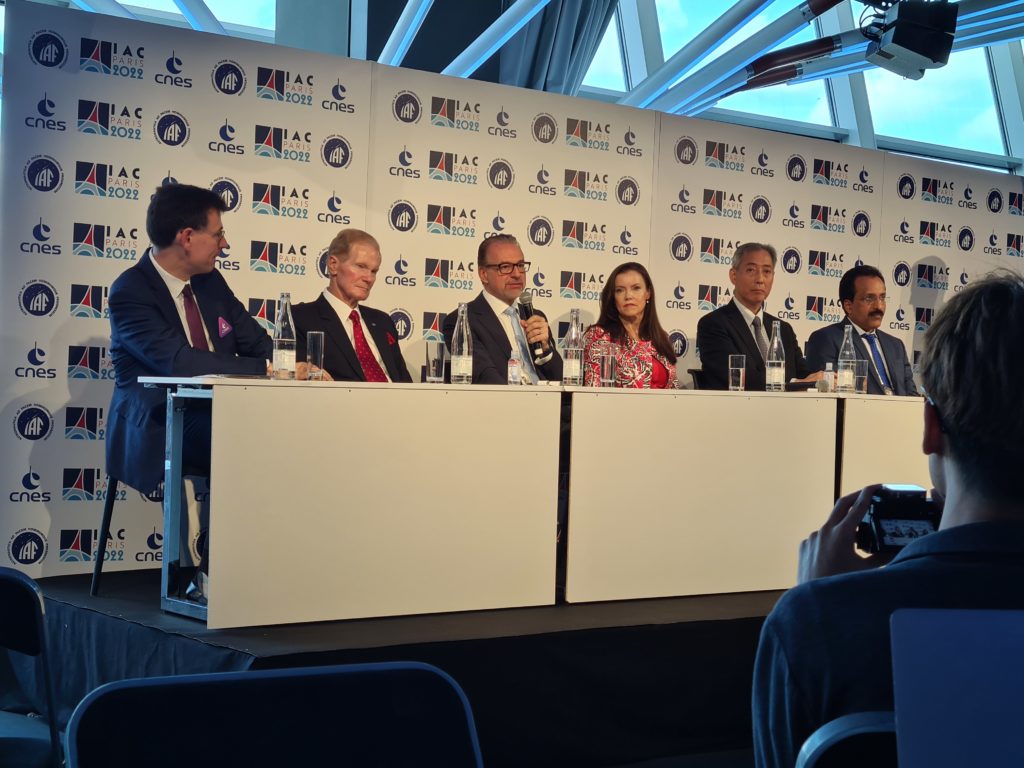 The heads of space agencies were ushered to a press conference immediately after their plenary talk. Courtesy: Seradata/ Farah Ghouri

President of CNES Philippe Baptiste pointed to the overall Chinese presence at the conference, even if China’s space agency was most obviously missing from the headlining panel. When asked about co-operation between the US and China in space, NASA Administrator Bill Nelson put it bluntly, and said it was “up to China”.

Indeed, over the course of the IAC Chinese officials talked of little other than international co-operation. They stressed that China was seeking partnerships for future missions to the Moon and further – although, as noted by SpaceNews, they managed to avoid mentioning their primary partner, Russia. In a panel entitled “International Co-operation prospects on China Lunar and Deep Space Exploration program”, Wang Qiong, director general of the Lunar Exploration and Space Engineering Center under the China National Space Administration (CNSA), also said that the Chinese space station, Tiangong, would be open to international astronauts. 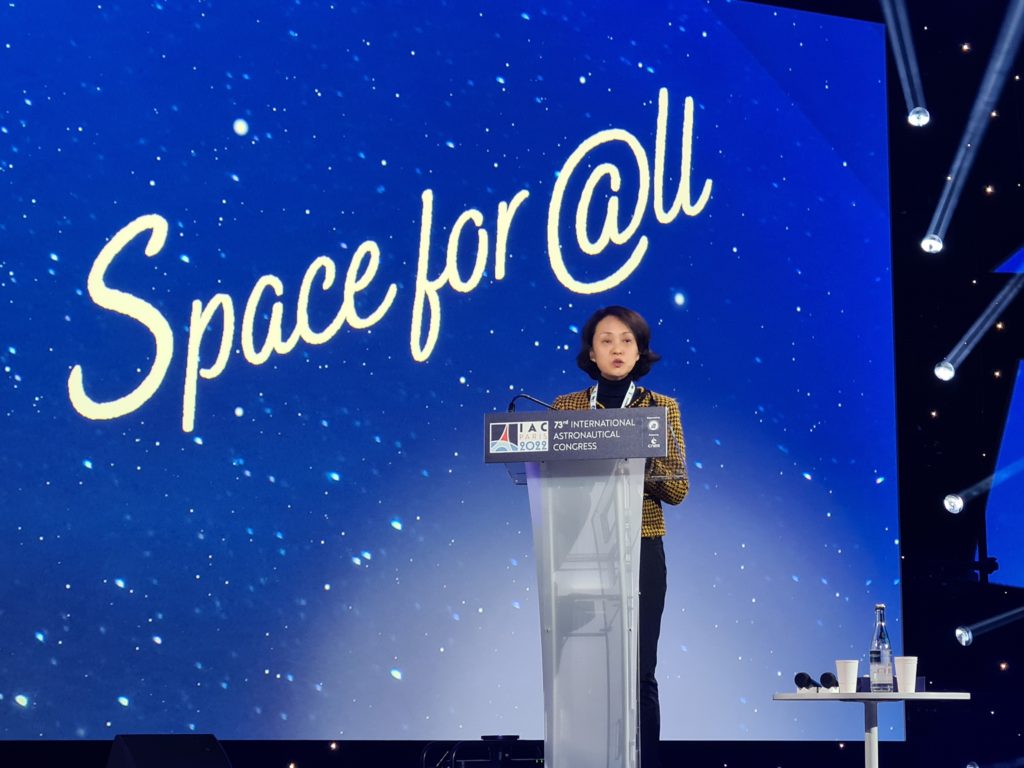 The City, Venue and Reception: Ah, Paris! We are starving

In between the 800 interactive presentations and 650 committee meetings hosted at the IAC this year attendees enjoyed views of the Eiffel Tower from a rooftop terrace – albeit at a bit of a distance. The Paris Convention Centre, where the IAC was hosted, was spread across 71,000 square metres. Thankfully the space was well thought through and there were moving walkways which helped attendees find their way from a choice of exit/entrance gates.

Facilities, as expected, were modern and well presented. But at the evening reception on the first day, which had promised attendees a bountiful supply of food and beverages, quantity was simply not enough. After queueing for a long time, many left many unsatisfied as hoards of marauding attendee students had got there first, with only scraps of bread and unidentifiable cheeses left. Not great. 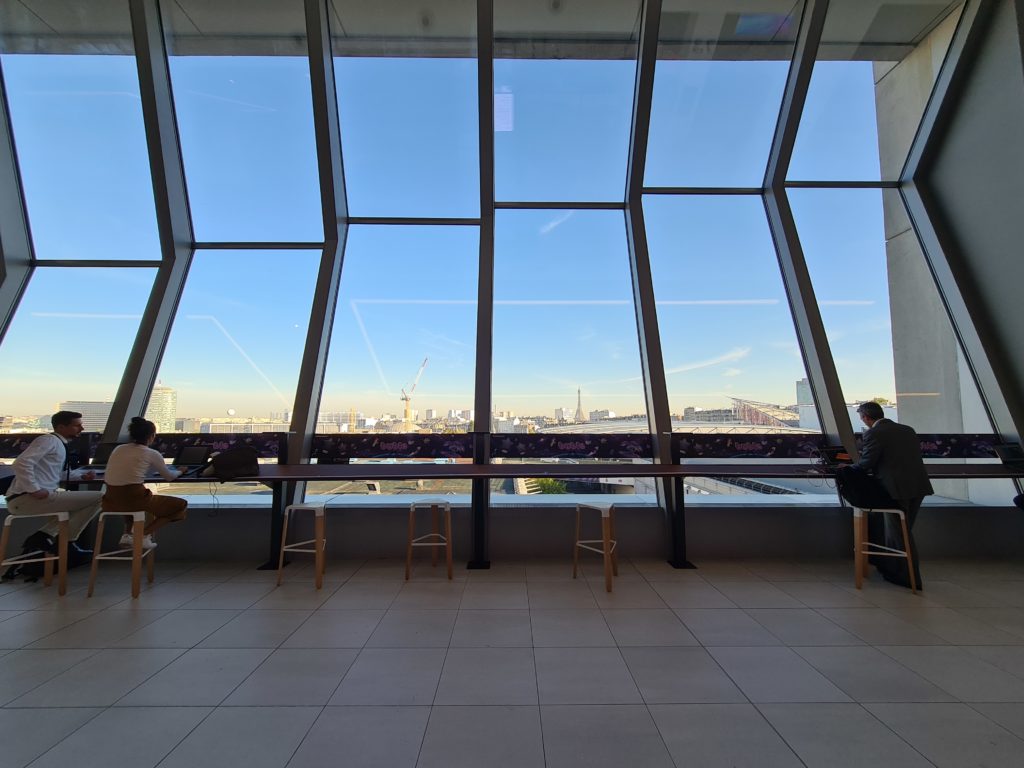 Just outside the hall for technical sessions, attendees could work and chat with a grand view of Paris. Courtesy: Seradata/Farah Ghouri

Aside from wine and cheese what attendees really came for was, of course, the plethora of presentations and technical sessions. There was plenty to keep attendees running across halls, trying to catch all the latest updates in space. Lockheed Martin presented its vision of space in 2050 – complete with power beaming on the Moon, concepts of fixed and mobile lunar habitats, and finding ways to utilise resources there for further space exploration.

In the exhibition hall there was a good variety of representation from commercial companies, both heavy weights and smaller outfits, and space agencies. The Indian Space Research Organisation (ISRO)  stand included its own spacesuit. It served as a reminder of India’s ambitions to send humans into space and ISRO’s Indian Human Spaceflight Programme which hopes to launch crewed missions using the GSLV 3 rocket. 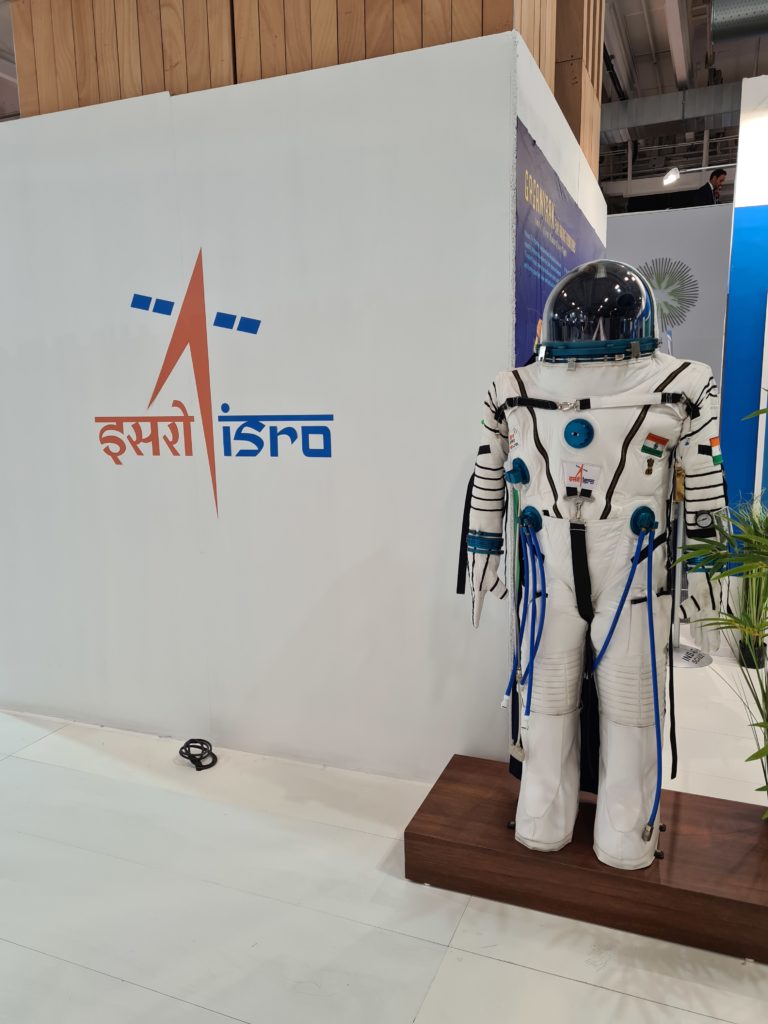 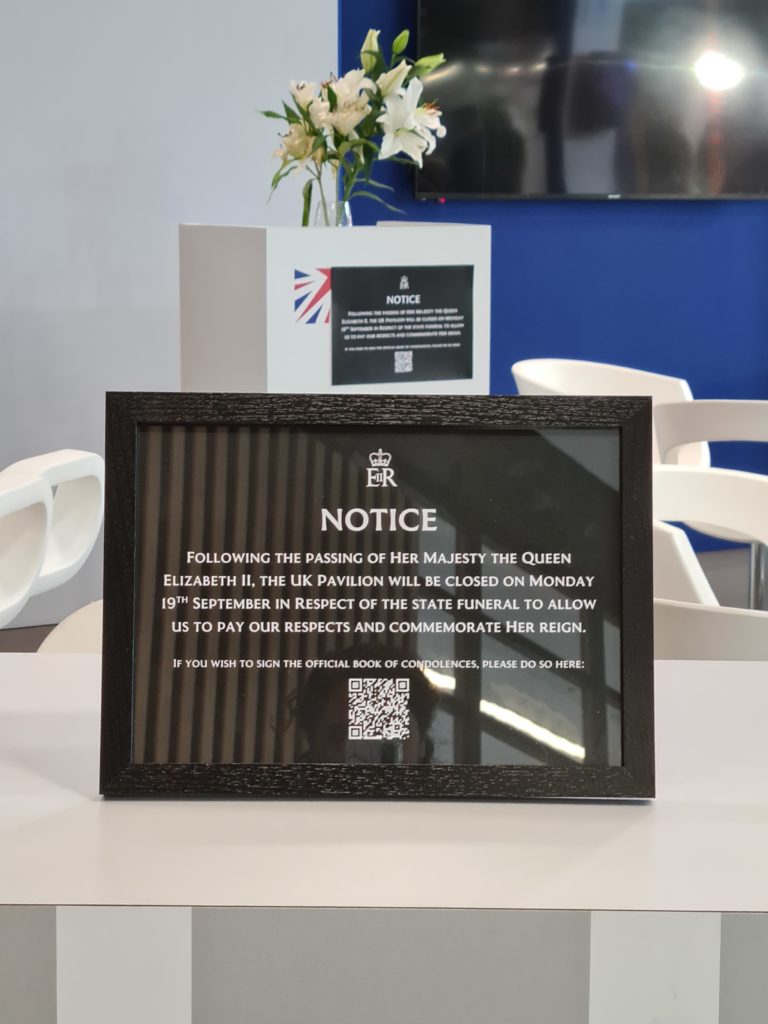 The UK stands were absent for day two of the IAC, out of respect for the funeral of Queen Elizabeth II. Courtesy: Seradata/Farah Ghouri

Commercial space stations were also a hot topic, with the impending retirement of the ISS in 2030 cropping up in many Q&As. Axiom hosted a virtual reality tour of its planned space station. After winning a competition in 2020, Axiom has been developing plans to attach its own module to the ISS. It will eventually be detached after the ISS is retired and used for research, tourism, astronaut training and manufacturing. Starlab, the private space station currently in development by Lockheed Martin and Voyager Space Holdings, also made headlines. The companies revealed a new partnership with global hotel chain Hilton, which will design astronaut facilities for Starlab and explore other marketing opportunities for the space station. 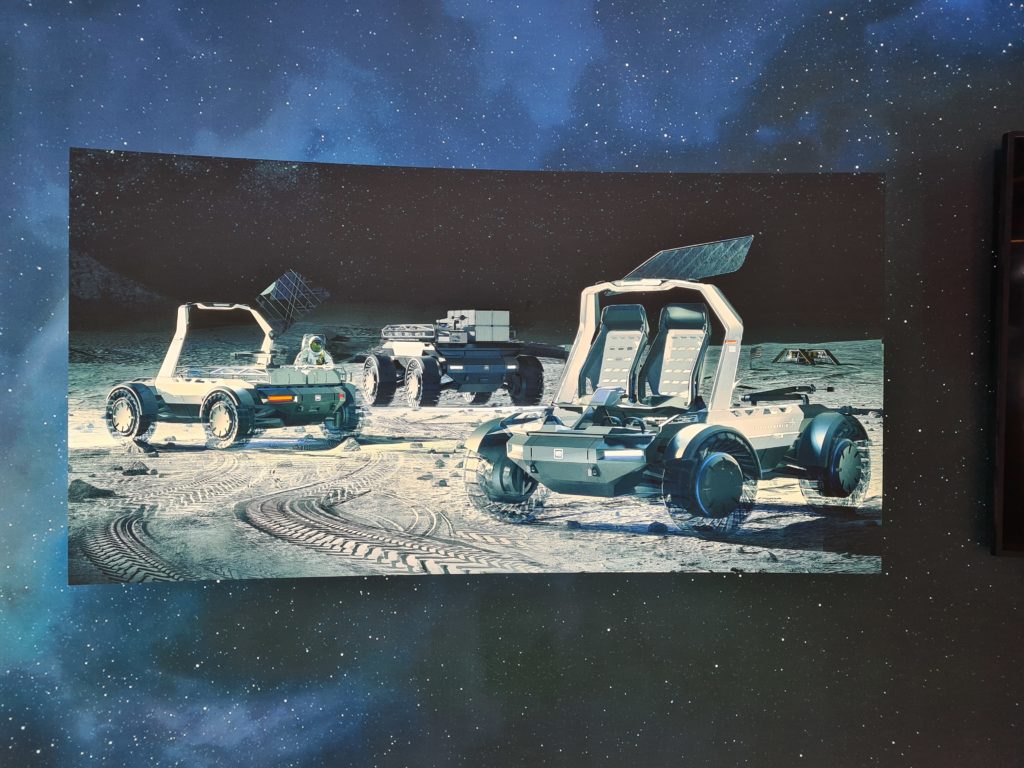 Lockheed Martin said they are already working on some of the ideas presented in their vision of space in 2050, including on Lunar Mobility Vehicles (LMVs). Courtesy: Seradata/Farah Ghouri

In conclusion: a busy and successful IAC…but it needed more from China

After the privations forced on conferences by Covid restrictions, it was hoped that Paris would attract more attendees. And this year it very much did. Nevertheless, there were a few disappointments. While past conferences erected infamous visa hurdles to the attendance of Chinese, it was hoped that this year’s accessible IAC would encourage more Chinese involvement. However, in the end there were relatively few of them, exemplified by China being missing on the “Top Table” of space agency chiefs. Despite this, IAC 2022 Paris was, overall, a very successful return to a full service. Next stop for the congress will be Baku, Azerbaijan, in 2023, and Milan in 2024. The IAF recently announced that Sydney, Australia, had beaten competitors from Bangkok, Beijing, Istanbul and Riyadh to host the 2025 IAC. So we will all be saving up for that one.