India’s space agency, the Indian Space Research Organisation (ISRO), successfully launched an LVM3-2 vehicle on a flight called LVM3 M2 from Satish Dhawan Space Centre in Sriharikota, India, at 1837 GMT on 22 October 2022. The vehicle was carrying 36 other OneWeb communications satellites. The launch represents a significant move into the commercial launch market for the rocket which, until recently, was known as the GSLV Mk 3. In reality the rocket shares little with its GSLV-1 and -2 notional predecessors, but there is conjecture that the name change was made to “divorce” itself from the poor reliability reputation of GSLV 1 and 2.

This was the fifth flight of LVM3 (one of these was suborbital). The 36 OneWeb Gen-1 satellites had a mass of about 150 kg each, totalling about 5,796 kg. These were launched to a circular low-Earth orbit of about 601 km with a 87.4 degree inclination. According to ISRO, the separation of satellites involved a unique manoeuvre of the cryogenic stage to orientation and re-orientation covering nine phases spanning 75 minutes.

OneWeb has since confirmed the receipt of signals from the satellites. OneWeb Gen-1 satellites utilise a bent-pipe technology approach to offer communication in Ku-bands. They are arranged in 12 orbital planes with 49 satellites in each plane at 1200 km.

The launch was arranged under the auspices of ISRO subsidiary NewSpace India Limited. The rocket has two liquid fuel stages – one LOx/Kerosene and a LOx/Liquid Hydogen upper stage,  plus two large S-200 solid rocket strap-ons. A human-rated version is expected to carry Indian astronauts to orbit in 2024. 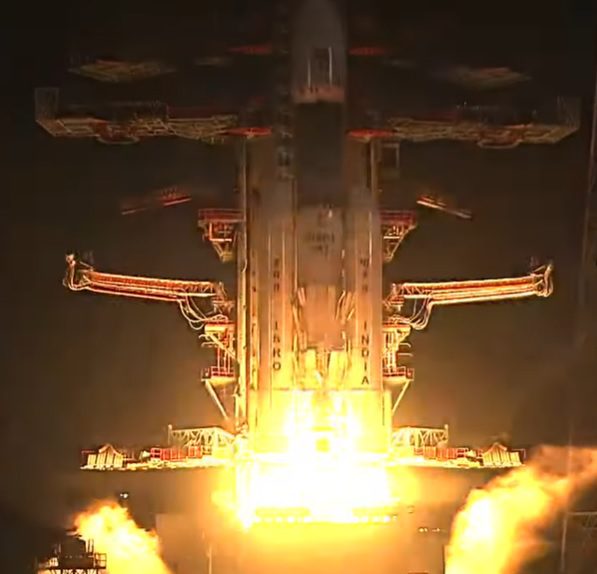