On 27 January 2021, two NASA spacewalkers conducted an extra vehicular activity to made some significant modifications to the International Space Station (ISS). Astronauts Victor Hopkins and Mike Glover began their spacewalk with the Quest air lock hatch being opened at 1126 GMT (the airlock had been depressurised eight minutes before). 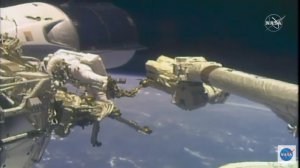 Astronaut Glover on the end of Canadarm-2 reaches the Columbus module on ISS. Courtesy: NASA TV

The main task of the spacewalk was to place a new ColKa (Columbus Ka-band) antenna on the side of the European Space Agency’s (ESA) Columbus module. ColKa, which was built by MDA’s UK division at Harwell, Oxfordshire, England, is designed to provide high speed data communications for scientific experiments on the Columbus module’s external Bartomeleo science package. ColKa was carried to the International Space Station on the Cygnus NG-13 space freighter.

Astronaut Glover attached himself to the Canadarm-2 robot arm which also carried the 105 kg antenna (plus 15 kg cover) to the Columbus module.  Installation went initially well. However, it was found that signals were not getting through. One of the cables attaching ColKa to Bartolomeo is believed to have a faulty connector which will have to be replaced on a later spacewalk. The 15 kg ColKa cover was nevertheless removed and left to drift off into space, in effect temporarily adding to space debris until it re-enters (at that altitude it will not be around for long).

With their main job done, the astronauts took to doing more mundane work such as removing equipment from the air lock, and removing two bolts from a solar array mast on the P6 Truss. The astronauts returned to the Quest airlock, ending the spacewalk with the Quest hatch being shut at 1820 GMT with repressurisation being achieved four minutes later.

Parts of this story are based on this report by Jonathan McDowell and used with his permission. His report is available here