It ain’t going to be a ballute: Musk chooses stainless steel and active transpirational cooling for his new Starship 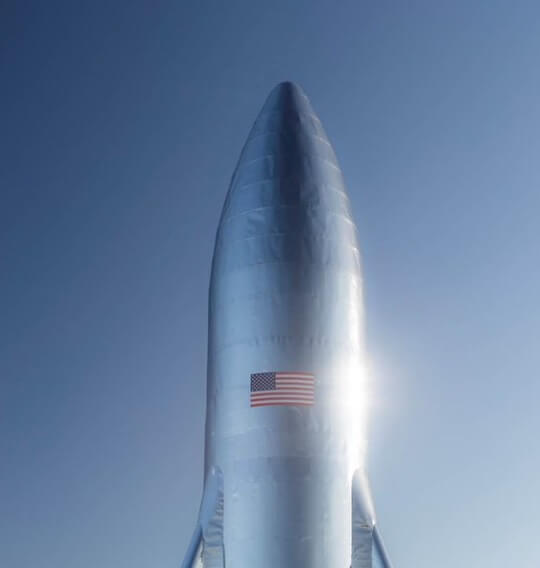 Until now it has been a mystery how Elon Musk planned to get his BFS/Starship upper stage back through its fiery re-entry intact from high-energy orbits and super-orbital return speeds from the Moon and Mars. This column speculated that he was planning to use some kind of inflatable “ballute” thermal protection device to provide a basic heat shield, while reducing the re-entering craft’s ballistic coefficient and hence its heating rates. But no, we were – or rather this writer was – wrong.  Instead, Musk is eschewing lightweight composites, or aluminium in conjunction with conventional tiling or ablative thermal protection systems, in favour of stainless steel and active transpirational cooling.

Update March 2019 Correction:  Elon Musk has since confirmed via Twitter than the windward side of the Starship will still use some hexagonal ceramic tilling. The leeward side of the stainless steel craft needs nothing except transpirational cooling in certain areas.

In an interview with Popular Mechanics, Musk revealed that the Starship – the upper stage of the BFS/BFR system now called the Starship/Super Heavy Booster combination – is going to be built out of stainless steel with coolant pumped through a double-walled skin structure, which would also use active transpirational cooling.  In the article it was originally implied that transpirational cooling would be used for the windward side as well as for the leeward side.

Rocket stage tanks and even satellite tanks made of stainless steel have long been known to survive re-entry into the Earth’s atmosphere. And while Musk admits that stainless steel is heavy, he points out that it has excellent toughness and fracture resistance at very cold temperatures – during a fully fueled launch for example – and yet it has a high melting point and hence good strength at the very high temperatures experienced during re-entry.

The other competitor is titanium, which is stronger per kg than steel and has very good thermal properties. It was famously used for the Mach 3 capable SR-71 Blackbird spy plane. Nevertheless, it has two major downsides: it is very expensive and it has a tendency to catch fire in the presence of liquid oxygen. So once all these factors are considered, stainless steel looks like a logical choice.

Cooling fluid – methane fuel – which would be pumped through the structure to cool it, and then emanate via pores in the skin to provide transpirational cooling for certain areas.

On Twitter, Musk noted that only a portion of the structure would need this active cooling. “1750K (degrees Kelvin) is peak heating expected on about 20% of Starship for LEO entry, ~1600K on 20%. Rest drops below 1450K, so no heat shield needed. Radiative cooling at T^4 takes care of 60% of the ship. Another reason for steel.”

There is no word yet about whether the tankage will be stainless steel as well. However, this is assumed to be so, and thus the very large carbon composite tank technology which SpaceX was developing will only be used for the super heavy booster.

Comment by David Todd:  This cooling technique, which is more normally used to cool rocket engine walls, could work, even for the windward side but would require a lot of fluid – say up to 20 metric tons (equivalent to about a fifth of the planned full reusable rocket’s payload).  It now seems that the early versions of the craft will use tiles for the windward side.  There could also be issues with differential expansion between the inner wall and the outer skin wall during the hot part of the re-entry, which could last 10 minutes. These problems aside, while entries at orbital velocities using this technique might be possible, Mach 30+ super-orbital velocity re-entries from the Moon or Mars will have much higher convective heating rates – probably too much for a pure transpirational cooling system to cope with all at once – hence the tiles. But perhaps Musk is also considering a staged return, employing aerobraking/aerocapture techniques to enter Earth orbit first and so reducing this initial heat load? By the way, stainless steel is excellent for fatigue resistance in mechanical cycling, although it has some thermal cycling issues.

P.S. Your correspondent has a first degree in Engineering Metallurgy (although his memory of this is shaky) and a Master’s degree in Astronautics and Space Engineering in which his thesis was on the use of winged entry vehicles on interplanetary missions.