The Japanese Aerospace Exploration Agency (JAXA) has been celebrating the successful landing of two small hopper rovers on the Ryugu asteroid on 20 September. The “mother ship” Hayabusa 2 was launched in December 2014 and, using electric thrusters and an Earth gravity assist, reached the asteroid in June.

Image of asteroid Ryugu (left) and sunlight (right) taken by Minerva II-1B during one of its “hops”. Courtesy: JAXA

After an initial hiccup during a dress rehearsal approach, JAXA’s mission controllers gave the go ahead for a landing attempt to be made by two Minerva II landers/hopper rovers. It began its descent from 20km to just above Ryugu’s surface at 0508 GMT on 20 September. At just 50m altitude, a protective cover was ejected followed by the Minerva II-1A and 1B rovers at 0406 GMT (all times from JAXA via Jonathan McDowell). At 0411 GMT Hayabusa-2 climbed away to its 20 km holding position.

The actual landing took place very slowly with the first contact being made at 0425 GMT.  The two Minerva craft then took turns to make hopping moves around the asteroid. Each Minerva II has a camera and a temperature sensor. The rovers managed to take images of the surface and temperature readings and relayed these via the mother ship back to Earth. 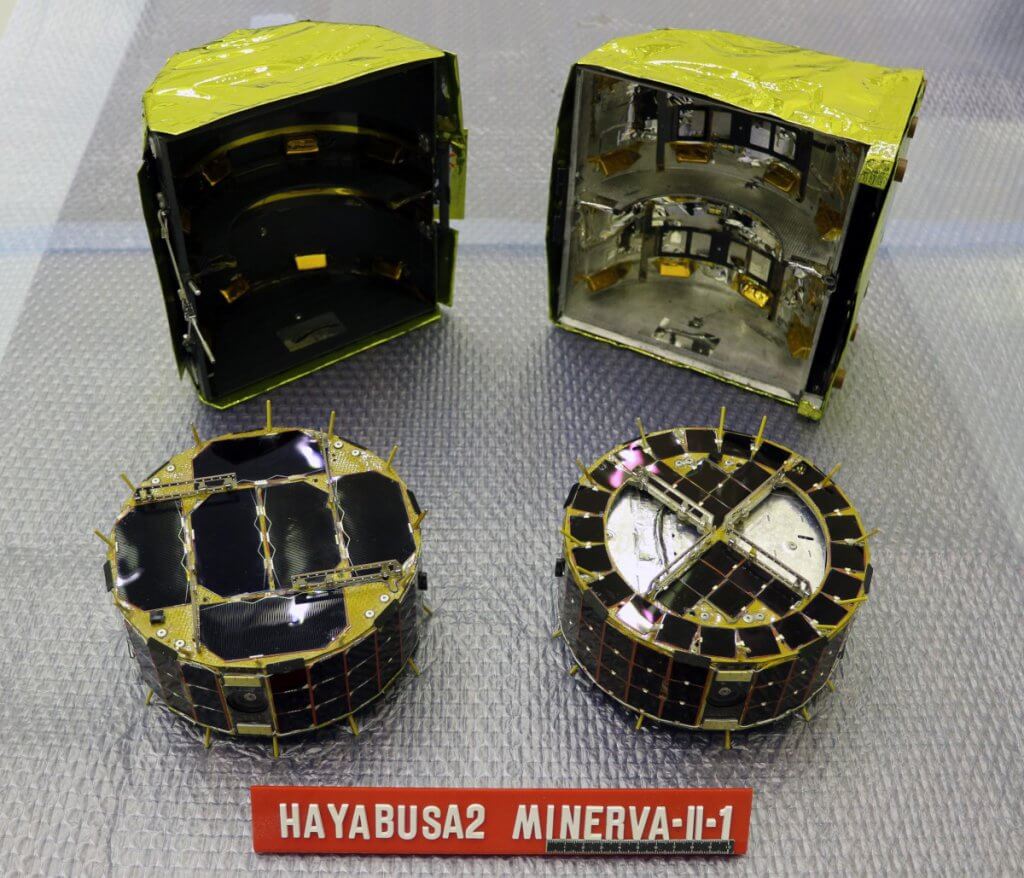 With so little gravity, at 1.1 kg mass the 0.07m thick, 0.17m diameter disc-shaped rovers can sustain a hopping motion, which is the best way of moving around such a low-gravity object. This is achieved by an internal spinning mechanism and the use of angular momentum to flip the rover.

And there is more to come. A Franco-German lander under the control of the German Aerospace Centre (DLR), called Mobile Asteroid Surface Scout (Mascot), is due to attempt a landing on 3 October.  Some “target markers” are also to be released.

Hayabusa 2 itself will also attempt to recover a sample of the asteroid using a pellet firing funnel system. This will be later returned to the Earth.