At 0636 GMT, on 14 July, the Baikonur Cosmodrome, Kazakhstan, hosted the launch of a Russian Soyuz 2-1A vehicle, carrying 73 payloads into low Earth orbit (LEO). The mission’s primary payload was the KANOPUS -V-IK 1, built for Roscosmos by JSC VNIIEM to provide Earth observation (EO) and sensor data. Of the other 72 payloads, just five had Russian involvement.

In order to accomplish the mission, the Fregat upper stage needed to complete a series of seven engine firings. This enabled entry into the correct initial orbit (479 x 523 km) for the primary KANOPUS payload, then a further 100 km (595 x 601 km) ascent to release all the secondary payloads except for the DOVEs, followed by a 150 km descent (450 x 482 km) to release the DOVEs. The seventh and final engine firing was to drive the Fregat into a destructive re-entry 8 hours and 42 minutes after the mission started. 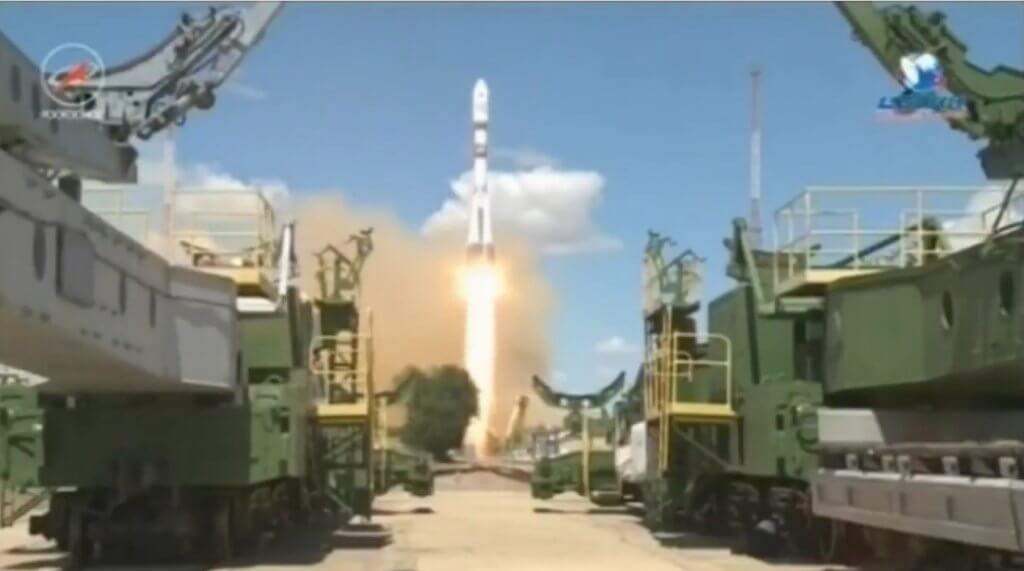 The Soyuz 2-1A lifts off from Baikonur, Kazakhstan, carrying 73 satellites. Courtesy of Roscosmos

The other payloads from Russia consisted of: two MKA-N 6U cubesats built for Roscosmos as demonstrators for the cubesat platform – these cubesats carry an Earth imaging payload; a mission designed by the Moscow Aviation Institute to provide cubesat experience to its students; ISKRA-MAI-85, a 1U cubesat mission (UTE-YUZGU) from the South-Western State University, Kursk, with input from the Universidad Technologica Equinoccial, Ecuador; and an independent mission designed by students from the Moscow Polytechnic University to deploy a large solar reflector in LEO called MAYAK.

The USA was the main source of the co-payloads, with EO company Planet having 48 of their DOVE 3U cubesats on board. Spire, a fellow USA Earth sensing company, also entrusted eight 3U cubesat LEMUR-2s to the launch. Other American companies on the launch manifest were GeoOptics with three earth sensing CICERO cubesats, Astro Digital with two LANDMAPPER-BC cubesats, and Tyvak with its technology demonstrator cubesat, NANOACE. The remaining international customers were: two German universities, the University of Stuttgart with its FLYING LAPTOP microsatellite and TU Berlin with TECHNOSAT; the Norwegian Space Centre with two Canadian-built microsatellites NORSAT-1/2, and Japan’s Weather News International (WNI) and its commercial meteorological satellite, WNISAT-1R.