China successfully launched the experimental communications satellite Shi Jian 20 on the reflight of the Long March 5 at 1245 GMT on 27 December. The launch took place from the Wenchang Satellite Launch Centre on Hainan Island, China. It placed a communications spacecraft, dubbed Shi Jian 20, into a super-synchronous transfer orbit on its way to geostationary Earth orbit (GEO).

The Shi Jian 20, which uses a DFH-5 bus built by CAST, is to test high throughput satellite communications technologies. Long March 5 has not flown since it suffered a failure to orbit on its second flight in July 2017, which lost the Shi Jian 18 spacecraft. That was later traced to a LOx/Liquid Hydrogen powered YF-77 engine failure in the rocket’s core (first) stage involving a structural failure of the exhaust duct from a turbo-pump.

Before that, the Long March 5 suffered a slight under-performance anomaly in November 2016 on its maiden flight. In the event, the Shi Jian 17’s mission was unaffected as the rocket’s YZ-2 upper stage made up for the velocity shortfall. 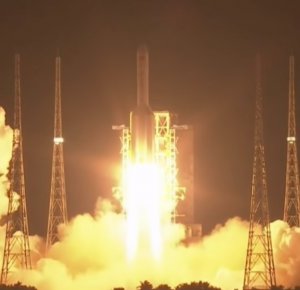 Comment by Phil Hylands: This was the last launch of 2019.