With much fanfare, the first ever orbital launch attempt from UK soil began with the lift-off from Newquay Airport’s horizontal spaceport facility of Boeing 747-400 “Cosmic Girl”. Beneath the wing of the carrier aircraft was the Virgin Orbit LauncherOne.

Cosmic Girl took off slightly earlier than planned at 2202 GMT on 9 January 2023 and reached its target altitude of 35,000 feet. It air-dropped LauncherOne at approximately 2311 GMT over the Atlantic Ocean, South of Southern Ireland. The first stage was ignited and fired successfully for its correct duration and separated as planned.

The second stage’s Newton Four engine ignited but then failed so that orbital velocity was not achieved. It and the remaining satellites fell into the Atlantic Ocean. It has been suggested that the Liquid Oxygen (LOX) component of the propellant combination ran out early – possibly due to a leak. 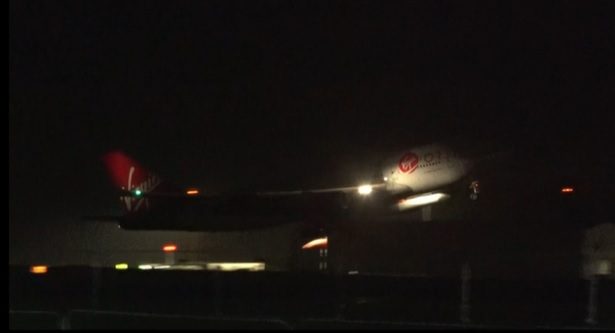 LauncherOne lifts off from Newquay aboard its Boeing 747 carrier aircraft. But its later launch went wrong. Courtesy: BBC

While some of the satellite operators inquired about direct insurance, in the end it is thought that only SpaceForge took out this cover and hence a small insurance loss is likely. The nine satellites carried were:

Update on 26 January: Virgin Orbit’s share price had recovered to US$2.11 just before the launch but then fell by a fifth to US$1.66 just after it. Overall, the shares are down about 80 per cent in the past 12 months.

Comment by David Todd: Despite the hoopla and the fanfare surrounding this event, which was supposed to demonstrate the UK getting back into the launch business, the debris of the nine small satellites aboard ended up in what is euphemistically called a “Submarine Orbit” at the bottom of the Atlantic Ocean. This failure is a blow to the prestige of the UK and to Virgin Orbit. It was the Virgin Orbit’s sixth flight and the second failure. While early flights traditionally have high failure rates, by flight six it would be hoped that most of the teething troubles would have been fixed. That is obviously not the case with LauncherOne. Interestingly, the first flight failed due to a liquid oxygen line rupture, although in that case it was on the first stage.