Lord David Willetts has been formally appointed as Chairman of the UK Space Agency by the UK Business Secretary Kwasi Kwarteng.

The former MP and government minister will oversee the work of the agency, led by CEO Dr Paul Bate, as it attempts to pursue the goal of the National Space Strategy to grow the UK’s already successful US$16.5 billion space industry.

Known as “Two Brains” for his intellect, Willetts found himself on a sticky wicket when he defended increases to student grants during his tenure as Minister for Universities and Science. Nevertheless his handling of the reborn British space programme was more warmly received. 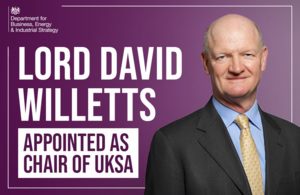