Mars Express confirms that Mars has water lake…but it is under 1.5km of polar ice

Radar data collected by ESA’s 15-year-old Mars Express spacecraft’s MARSIS instrument has revealed a 20km-wide lake of salty water under 1.5km of ice at the South Pole of Mars. The lake is said to be similar to Lake Vostok, which lies 4km under the South Pole. While the seasonal flow patterns of water have been seen for some time, this is the first time that liquid water has been formally confirmed on the planet.

Italian scientists used evidence from the Mars Advanced Radar for Subsurface and Ionosphere Sounding instrument, MARSIS, which can map subsurface by measuring how long it takes for radar signals to be reflected back to the spacecraft, and with what strength, finding the bright flat return similar to lakes on Earth.

While the salt content in this lake is thought to be very high, certain specialist life forms might still be able to exist in these conditions. Scientists will, no doubt, be working out how to design a spacecraft lander with a drill and/or submersible to examine this lake further. 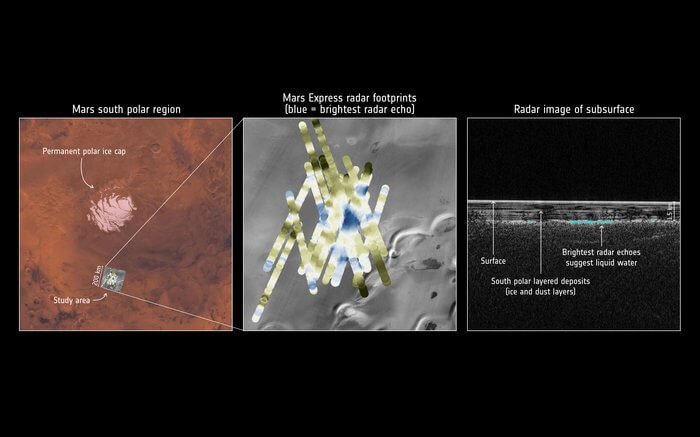 From the Earth to the Moon: Apollo astronaut interview videos

China’s Moon, Russia’s Mars and the UK’s origins of the Universe