US firm Maxar is celebrating the award to it of two orders. Maxar’s SSL division (the former Space Systems/Loral) has been awarded the construction order by the Geostationary Earth Orbit (GEO) communications satellite operator Intelsat for its planned Intelsat 40e satellite. The spacecraft will be launched in 2022. The spacecraft will be based on the SSL-1300 bus/platform design and will be an addition to the Intelsat Epic fleet and will provide high throughput services to the Americas. The exact financial worth of the contract has not been disclosed.

Note that this contract was originally signed in November 2019 as an undisclosed identity order. 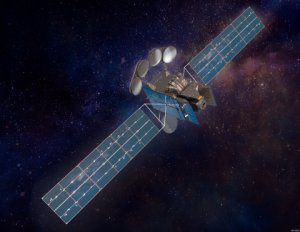 The Intelsat 40e spacecraft is unusual in that it is carrying a hosted scientific payload for NASA called TEMPO. TEMPO is a UV-visible spectrometer that will detect pollutants by measuring sunlight reflected and scattered from the Earth’s surface and atmosphere. The resulting data from TEMPO will be used to enhance air-quality forecasts in North America, enabling the more effective early public warning of pollution incidents. Maxar was formally selected to host TEMPO by NASA in 2019 with the work being done as part of a Space and Missile Systems Centre Hosted Payload Solutions (HoPS) contract.

In a separate development, Maxar has been awarded a contract worth US$142 million by NASA to demonstrate robot arm technology aboard the planned Restore-L servicing satellite which Maxar is building for NASA and which will be launched in 2025. The robot arm – dubbed the Space Infrastructure Dextrous Robot (SPIDER) will be used to construct a large antenna from component parts.