Space debris and its growing potential to impact on orbiting satellites and spacecraft is a hot topic of which even the general public is now aware. Space scientists have warned that it is a problem, and one that is getting worse. But just how bad is it and how bad will it get? And can we track space debris? Well the answer is both ‘yes’ and ‘no’, according to Seradata’s Tim Fuller. 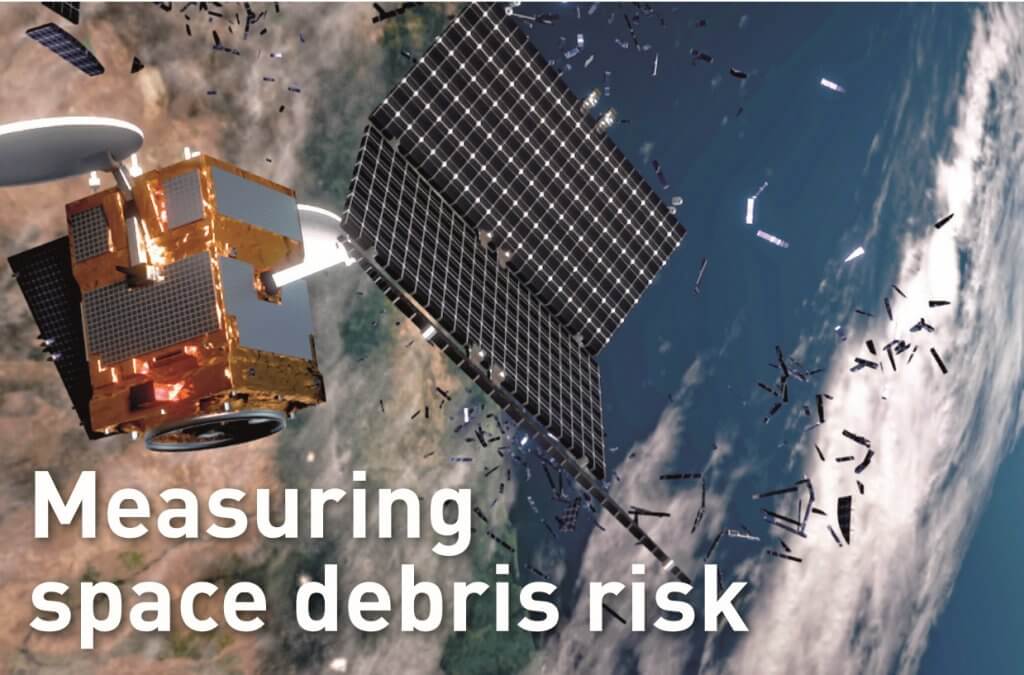 As of April 2017, more than 290 break-ups in orbit have been recorded since 1961. Most were explosions of satellites and upper stages – fewer than 10 involved accidental and intentional collisions.

The starting point for tracking space objects is the US Joint Space Operations Center (JSpOC) catalogue of all artificial Earth orbiting objects. The tracked objects’ orbits are published in the form of Two Line Element sets or TLEs. This is a great resource, which currently covers about 19,000 in-orbit objects including live and retired satellites, and rocket bodies, as well as pieces of debris shed by these. However, TLE coverage and accuracy is limited. The measured orbital position can be out by several km compared with the actual location – an inaccuracy that makes orbital manoeuvres to avoid debris problematic using this data. Indeed, it has caused some space operators to form their own tracking organisations, such as the Space Data Association.

An even more important issue is that the coverage provided by the TLE data is just the tip of the iceberg. Most of the 19,000 objects capable of being systematically tracked have a size greater than 10 cm diameter in low Earth orbit (LEO) and greater than 1 m in geosynchronous orbit (GEO). This means that the whereabouts of the majority of orbital debris is unknown. Space agencies and companies are beginning to realise that debris strikes, such as the one that punched a 40 cm diameter hole in the solar array of the European Space Agency’s (ESA) Sentinel1A spacecraft, are much more common than originally thought, and are likely to increase. 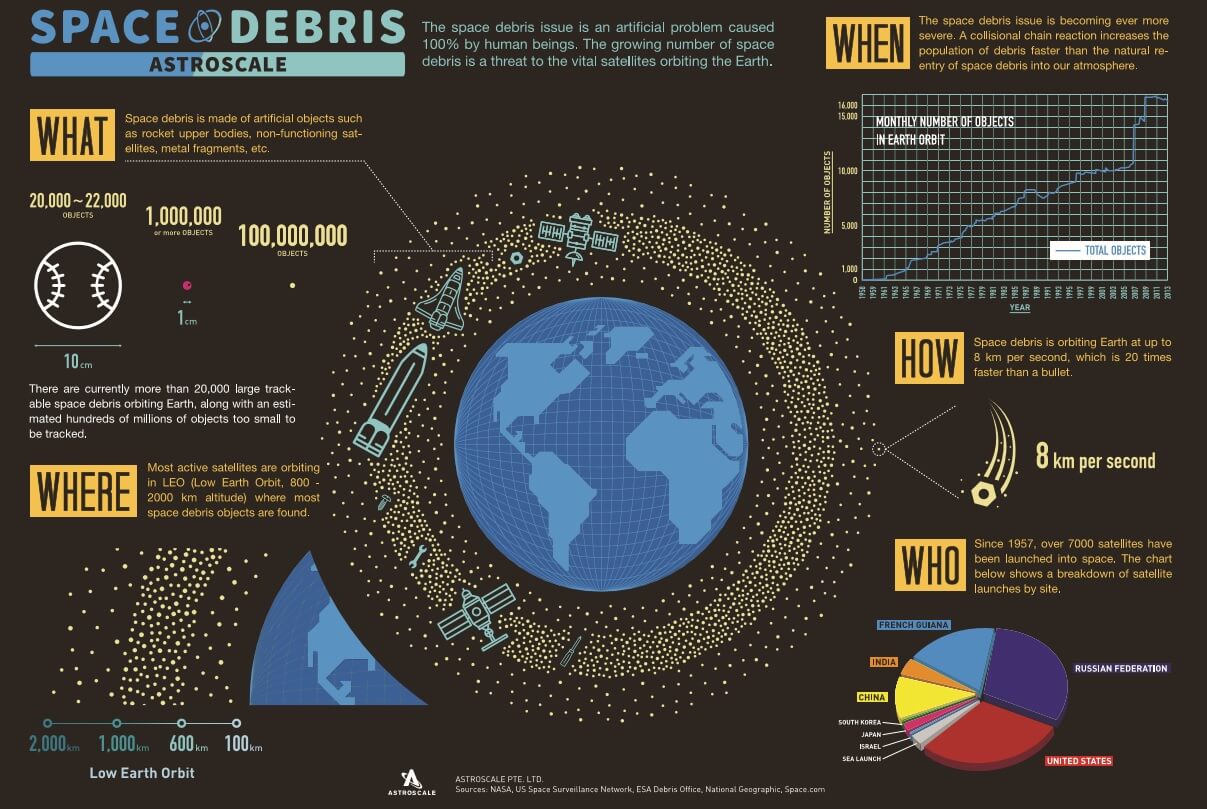 At the European Conference on Space Debris held in Darmstadt, Germany, in April this year, Holger Krag, Head of the ESA’s Space Debris Office stated: “There are about 750,000 flying bullets about one centimetre in size, such as the one that hit Sentinel 1A, and approximately 150 million objects at around one millimetre.” These numbers are estimates as most small objects are not tracked or even detected. The key point is that the risk of conjunction is much higher for these smaller, more numerous, uncatalogued objects. The ‘Revus Project’ study, performed for the European Union (EU), showed that the greatest risk posed to spacecraft is from objects in the 2 to 3 mm range. For debris objects below 1 mm, shielding and good design can normally provide a successful defence. So, from a satellite perspective a ‘bad’ conjunction is one with an object of greater than 1 mm, as this is the size that may jeopardise the mission.

Sentinel-1A’s solar array before and after the impact of a millimetre size particle on the second panel. The damaged area has a diameter of about 40 cm, which is consistent on this structure with the impact of a fragment of less than 5 mm in size. Courtesy: ESA

Is debris modelling the answer?

Given the lack of actual tracking data for objects of less than 10 cm, NASA’s Orbital Debris Program Office has developed the Orbital Debris  Engineering Model (ORDEM) to estimate the chance of a debris collision involving objects of 10 microns and larger. ESA has likewise developed a similar model called MASTER. Both these models provide a statistical approach, taking known observational data and producing a conjunction risk estimate for an object in a given orbit. They are in close agreement for objects above 1 cm, although below this figure they tend to differ significantly. ORDEM produces results for a spherical object of one square metre cross-sectional area and creates a table of the expected number of strikes per year due to debris objects of 10 microns diameter and greater. Note, ORDEM does not model ‘natural’ micrometeoroid conjunctions, while its GEO debris modelling is limited to objects less than 10 cm. However, micro objects ‘crossing’ GEO in a GTO orbit are included in the model.

Thus, if an analyst (e.g. at a satellite operator or insurance company) wishes to consider the risk of a debris strike in orbit, statistical models such as ORDEM and MASTER are indispensable tools.

For this reason, at Seradata we decided to bring the TLE data into our SpaceTrak launch and satellite database to be used with the ORDEM model to compute the conjunction risk for every active spacecraft and known future spacecraft (approximately 2,800 in total). This is a significant undertaking as the ORDEM calculation takes more than 20 minutes for each spacecraft.

The output shows that by far the ‘dirtiest’ orbits are the sun-synchronous and near-polar LEOs between 650 and 1000 km, and between inclinations of 86 and 110 degrees relative to the equatorial plane. A one square metre spacecraft in this orbit range is predicted to receive more than two strikes per year from debris of greater than 1 mm diameter. Note that the risk to an equivalent spacecraft in the same orbit from a debris object greater than 1 cm is much lower at 0.03 percent per year.

Chances of being ‘killed’ or ‘maimed’

Taking the ORDEM predicted strike rate of two per year per square metre at face value, if an operator were to launch a spacecraft with a nominal one square metre cross-sectional area body into an 800 km polar orbit, what would the likelihood be of the spacecraft becoming killed or maimed (permanent loss of capacity and/or mission design life) by this debris? By focusing on the risk to the satellite body where the ‘vital organs’ of a spacecraft are (debris strikes on solar arrays and antennas are more likely to cause degradation than fatal damage), we can estimate the chance of a mission-fatal occurrence. This is done by converting the chance of a strike into a ‘maim rate’ by looking at the history of debris strikes to spacecraft and the severity of damage caused by them.

Excluding low-speed incidents involving space station operations, Seradata’s SpaceTrak launch and satellite database shows that there have been 12 debris strike-related serious anomalies, usually involving a permanent loss of mission capability. The spacecraft involved were nearly all in LEO (usually in sun-synchronous or near polar orbits) and only two spacecraft were under 10 kg mass. Eight anomalies occurred within the last 10 years (2007-2016). When spacecraft fail, the reason is not always fully known or disclosed, so these reported numbers may be conservative. If we estimate that the true rate for serious debris strike-related anomalies is about 10 in 10 years and compare this to the number of available spacecraft, we can get a rate for the period. From 2007 to 2016 the LEO non-cubesat active fl eet grew from 344 to 602 spacecraft. For simplicity, let’s consider the fl eet size fl at at 500 in any given year in the range. Therefore, we have 10 ‘serious anomaly’ debris strikes on 5,000 available spacecraft overall in this 10-year period. This gives us a ‘ballpark’ serious historical anomaly rate of one in 500 satellites per year.

Implications for new constellations Taking our previous result of a sun-synchronous orbit, one metre square satellite receiving two strikes per year, and combining this with a rate of one in 500 spacecraft suffering a serious anomaly due to debris strike, this implies one strike in 1,000 causes a serious anomaly. If we were to apply that rate to a constellation of 1,000 satellites in a sun-synchronous orbit, each of one square metre body cross-section, this implies that the constellation will suffer 2,000 strikes (two strikes per satellite) by an object 1 mm or larger in a given year. Adjusted for the maim rate of 1/1,000, this implies that two satellites of that constellation will be destroyed per year, making it a serious environmental risk. Or, put another way, each satellite has a maim risk of 0.2 percent. This is highly significant when compared to in-orbit insurance premium rates. While the combination of NASA ORDEM data with a maim rate needs refining, this provides a valuable new and convenient analytical tool for operators, insurers and other analysts to quantify risk to active and future spacecraft.

Space debris is here to stay

This article has focused on the risk to active spacecraft. A wider concern is that proposed new mega constellations will place much more satellite ‘sail area’ into already dirty LEO orbits.

Even with good major collision avoidance operations and post-operation debris mitigation strategies, including de-orbit capabilities, small debris strikes are going to grow, probably creating more debris. It looks like the problem will accelerate and may even reach the ‘runaway’ Kessler syndrome condition.

What next? Clearly, we need more data to better understand and quantify the risk by orbit. There are new tracking systems coming on line all the time. The US Space Fence radar system will greatly improve object tracking down to 2 cm in LEO and is expected to become operational in 2019.

Other commercial organisations, such as LeoLabs and ExoAnalytic, are using private optical and radar assets to offer data. This is a great step forward but more data is required on the sub-two centimetre population in order to validate and improve debris modelling.

One interesting programme is Astroscale’s IDEA OSG1 small satellite, which will use two Space Debris Monitors supplied by the Japanese Space Agency (JAXA). It is due to launch early in 2018. Another simple idea would be to fit cameras to all spacecraft with solar arrays above, say, one square metre – then their condition and debris strike status could be inspected after a given period.

About the author: Tim Fuller is Founder and Managing Director of Seradata Limited. Prior to this, he worked in senior management roles at Flightglobal (Reed Business Information) and AvSoft. In addition to his 20 years’ experience in business-to-business aerospace data publishing, Tim has a degree in Engineering with Business Studies and is a Member of the Chartered Institute of Marketing and the British Interplanetary Society.