NASA has signed agreements with three US companies to develop designs of space stations and other commercial destinations in low Earth orbit (LEO). The idea is that NASA will part-fund a commercial economy in LEO after the retirement of the International Space Station (ISS) and will eventually become a “customer” for stays on these LEO space stations.

The total estimated award amount for all three funded Space Act Agreements is US$415.6 million. The companies that received awards are:

These awards are part of a two-phase approach to stimulate US private sector development of commercial, independent space stations that will be available to both government and private-sector customers. During this first phase, private industry, in coordination with NASA, will formulate and design commercial LEO destination capabilities suitable for potential government and private sector needs. The first phase is expected to continue until 2025. The space stations are more like the USA’s first LEO space station Skylab in size than the ISS.

“Building on our successful initiatives to partner with private industry to deliver cargo, and now our NASA astronauts, to the International Space Station, NASA is once again leading the way to commercialize space activities,” said NASA Administrator Bill Nelson. “With commercial companies now providing transportation to low-Earth orbit in place, we are partnering with U.S. companies to develop the space destinations where people can visit, live, and work, enabling NASA to continue forging a path in space for the benefit of humanity while fostering commercial activity in space.”

Blue Origin and Sierra Space have partnered to develop Orbital Reef, a commercially owned and operated space station to be built in LEO, which will start operating in the second half of this decade. Orbital Reef teammates include Boeing, Redwire Space, Genesis Engineering and Arizona State University. Orbital Reef’s human-centred space architecture is designed to be a “mixed-use space business park” that provides essential infrastructure to support all types of human spaceflight activity in LEO and can be scaled to serve new markets. 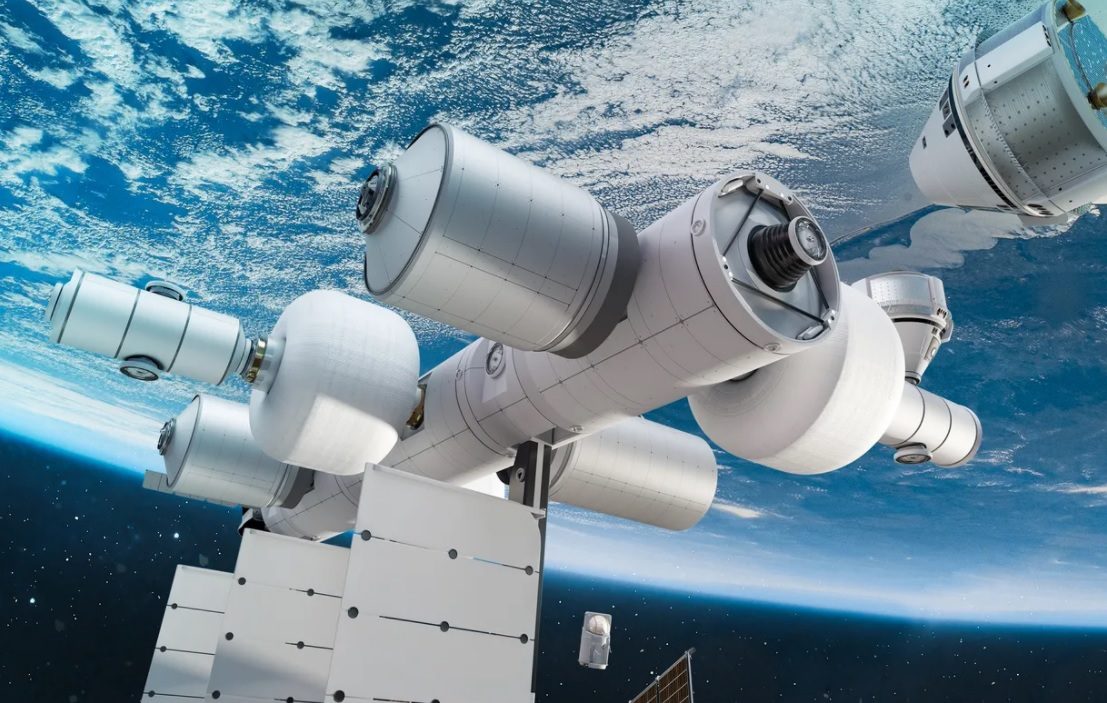 The station’s shared infrastructure will support the proprietary needs of diverse US and international users, tenants and visitors, including those representing research, industry, government and the commercial sector. Features such as reusable space transportation and advanced automation can minimise cost and complexity to enable the widest range of users. Accommodation, vehicle docking ports and utilities can all be scaled up as demand grows, according to NASA.

Nanoracks’ commercial LEO destination, in collaboration with Voyager Space and Lockheed Martin, is called “Starlab.” This is targeted for launch in 2027 on a single flight and will be continuously crewed, commercial space station dedicated to “conducting advanced research, fostering commercial industrial activity, and ensuring continued US presence and leadership in LEO”. Starlab is designed for four astronauts and will have power, volume and payload capability equivalent to the ISS.

Son of Skylab: Starlab is set to become the destination in low Earth orbit for NASA and commercial astronauts. Courtesy: Nanoracks

Starlab will host the George Washington Carver Science Park featuring four main operational departments – a biology lab, plant habitation lab, physical science and materials research lab, and an open workbench area – to meet the needs of researchers and commercial customers for commercial space activities. NASA says that station will be built with flexible growth in mind, “featuring interfaces both internal and external to the spacecraft to allow Nanoracks to expand the architecture as new demand sources are identified, and new markets emerge.”

Northrop Grumman’s “Free Flyer” design for a modular, commercial destination leverages flight-proven elements, such as the Cygnus spacecraft that provides cargo delivery to the International Space Station. It is designed as a base module for “extended capabilities including science, tourism, industrial experimentation, and the building of infrastructure beyond initial design,” according to NASA.

Northrop Grumman’s team includes Dynetics, with other partners to be announced.

In addition to these new awards NASA selected Axiom Space in January 2020 to design and develop commercial modules to attach to the station.

While the above awards represent the first phase in the design process, the second phase of NASA’s approach will involve a transition towards commercial LEO destinations. NASA intends to certify commercial LEO destinations from these and other potential entrants for NASA crew member use, and ultimately, to purchase services from destination providers for the crew. The agency estimates that future needs in LEO will require continuous accommodation and training for at least two crew members, as well as the ability to support a national orbiting laboratory. Approximately 200 investigations will be performed annually to support human research, technology demonstrations, biological and physical science.

Update on 4 January 2021: With the realisation that it will take time to build a replacement for the ISS, NASA, with the permission of the White House, will ask its international partners to extend the operational life of the ISS from its planned 2025 retirement date to 2030.