NASA has announced the end of its DAWN mission to the asteroids. After being ordered, cancelled and then reinstated, DAWN was launched in 2007. And very successful it was too. Via the innovative use of solar-electric ion propulsion, the DAWN spacecraft visited the giant asteroid Vesta in July 2012, which it imaged and examined. It moved on over a year later to Ceres, an asteroid classed as a Dwarf Planet, which it has remained near since March 2015. In the end, having easily exceeded its ten-year mission design life, the spacecraft ran out of fuel. On 1 November DAWN was found to be unresponsive during two attempted communication sessions due to the craft being unable to maintain antenna orientation with Earth. The Dawn spacecraft is now dead in a stable 3977 x 22 km, 85.7 degree inclination, elliptical polar orbit around Ceres. 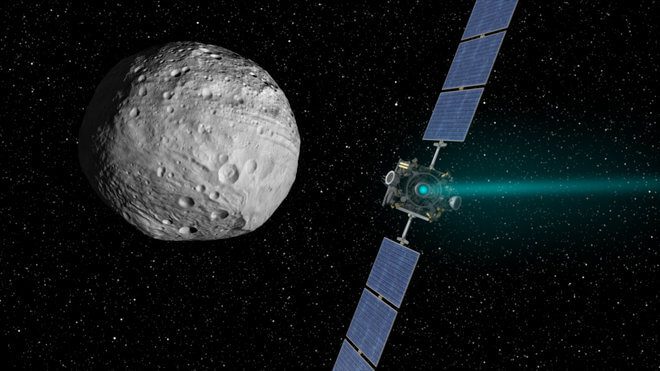 DAWN is shown using its solar electric ion drive to visit the giant asteroid Vesta in this illustration. Courtesy: NASA/JPL-CalTech

On 11 September 2014, NASA's DAWN spacecraft which is currently travelling to the Ceres asteroid having previously visited the asteroid Vesta, has entered safe mode.  The cause Read more