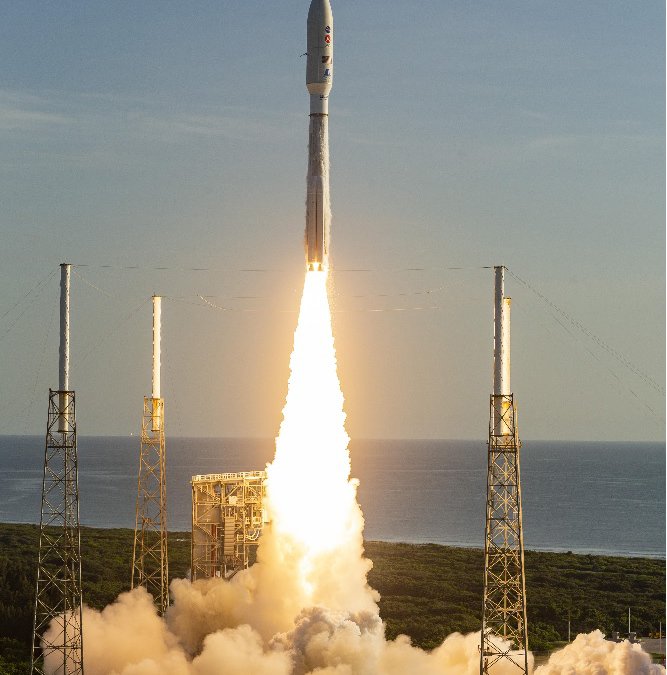 Lifting-off from Cape Canaveral, Florida, a ULA Atlas V 541 rocket has carried the Mars 2020 mission into orbit. The launch occurred at 1150 GMT, 30 July 2020. The payload was placed into a “parking” low Earth orbit before the rocket’s Centaur upper-stage performed its Trans Mars Injection burn, pushing the payload on to a course that will intercept Mars in February 2021.

The main component of the Mars 2020 mission is the Perseverance rover. This rover draws heritage from the previous Curiosity mission that reached Mars in 2012. Perseverance is heading to the Jezero Crater located in the Syrtis Major Quadrangle on Mars. There it will conduct experiments to assess the possibility of previous habitability, and look for signs of ancient or extant life. Another major objective of the mission is the collection and preparation of rock samples, that may be returned to Earth by future missions.

Also on-board the rover is the small Ingenuity Mars Helicopter. This is a 1.8 kg “rotorcraft” which will be deployed from Perseverance to determine the viability of powered flight on Mars. It will also act as a demonstrator for future potential UAV-type missions on Mars. Issues that Ingenuity will explore include: viability of conducting powered flight, levels of autonomy required due to communication lag and survivability of its delicate components during Mars entry and landing.