Having previously eschewed using the Lunar Gateway space station as a half-way stop for its human carrying landing system, NASA  has selected three teams to build human landers/ascent craft to land astronauts on the Moon as part of the Artemis programme. The target date for the initial landing is 2024. Initial landings will be stand-alone missions. Later flights will make full use of the Gateway-enabled capabilities, including refueling and reuse of all or parts of the lander.

The awardees for NASA’s Human Landing System contracts are the teams led by Blue Origin, Dynetics (a Leidos company) and SpaceX. Each has a different concept for its vehicles, offering a diversity of architecture which increases the chance that at least one will succeed. It is not known yet how many of these “finalists” will be proceeded with.

Update on 21 May 2020: Under pressure to do so, Doug Loverro, NASA’s Associate Administrator of Human Exploration and Operations Mission Directorate, has resigned after less than six months in the position. Loverro took over from the long-serving Bill Gerstenmaier, who was unceremoniously demoted in July 2019. While the exact cause of Lovarro’s departure has yet to be revealed, it is understood to be related to the choice of lunar landing system finalists and how the normal procurement procedure was circumvented.

Blue Origin is the prime contractor for the National Team that includes Lockheed Martin, Northrop Grumman and Draper. Their Integrated Lander Vehicle (ILV) is a three-stage lander that harnesses the proven spaceflight heritage of each team. 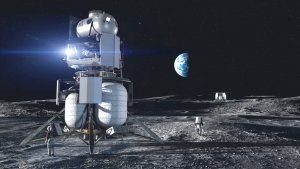 Blue Origin will build the National Team concept’s descent element, which is powered by BE-7 cryogenic engines with the firm currently working on cryogenic storage systems. Team member Lockheed Martin will build the ascent element that includes the crew cabin, which will have significant commonality with Orion. Northrop Grumman will build the transfer element based largely on its Cygnus cargo module that services the International Space Station. Northrop Grumman is also leading development of a future refueling element for a sustainable lander demonstration. Draper will provide the guidance, navigation and control, avionics and software systems that draw largely on similar systems it has developed for NASA.

The National Team has outlined a plan in which the ILV can dock with either Orion or the Gateway to await crew arrival. Blue Origin’s elements for the Human Landing System can be launched individually on commercial rockets or combined to launch on NASA’s Space Launch System.

Dynetics proposed a robust team with more than 25 subcontractors specialising in both the larger elements and the smaller system-level components of the Dynetics Human Landing System. This approach capitalises on Dynetics’ experience as an integrator on military and defence contracts with large subcontractor teams. 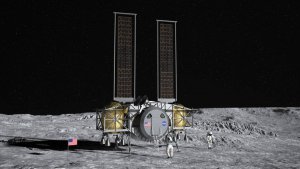 The Dynetics Human Landing System concept includes a single element providing the ascent and descent capabilities, with multiple modular propellant vehicles pre-positioned to fuel the engines at different points in the mission. The crew cabin sits low to the surface, enabling a short climb for astronauts entering, exiting, or transporting tools and samples. The DHLS system supports both docking with Orion and with Gateway and will get a fuel top-off before descending to the surface. After the surface expedition, the entire vehicle will return for crew transfer back to Orion. The system is described as being “rocket-agnostic” – that is, capable of launching on a number of commercial rockets.

Starship is a fully reusable launch and landing system designed for travel to the Moon, Mars and other destinations. The system leans on the company’s tested Raptor engines and flight heritage of the Falcon and Dragon vehicles. Starship includes a spacious cabin and two airlocks for astronaut moonwalks. 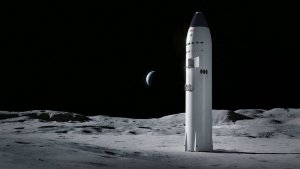 Several Starships serve distinct purposes in enabling human landing missions, each based on the common Starship design. A propellant storage Starship will park in low Earth orbit to be supplied by tanker Starships. The human-rated Starship will launch to the storage unit in Earth orbit, fuel up and continue to lunar orbit.

SpaceX’s Super Heavy rocket booster, which is also powered by Raptor and fully reusable, will launch Starship from Earth. Starship is capable of transporting crew between Orion or Gateway and the lunar surface.

Comment by David Todd:  The Orion spacecraft’s main method of getting astronauts into the Cis-Lunar environment has an undersized service module and propulsion system. This means it can only get to high lunar orbit (or its equivalent) if each landing/ascent system has either a dedicated transfer system, or enough Delta V on board to move between orbits on its own. And that is after any descent and ascent from the lunar surface. In other words, propellants remain the big issue.

Refueling in orbit and on the Moon is one way around this conundrum, but there are problems because the technology is far from being ready.

Likewise, the cryogenic propellants (Liquid Oxygen/Liquid Hydrogen or Liquid Methane) that are to be used by most of the entrants have very good energy and propulsive efficiency, but they are difficult to store and suffer significant boil off.

Storable hypergolic propellant combinations, such as those used by the original Apollo Lunar Excursion Module (LEM), are much simpler to handle and more reliable – but offer much lower performance. That said, if NASA wanted to get back to the Moon quickly, it should have chosen a simpler Apollo style lunar module as its initial landing/ascent craft type, albeit with payload/crew limitations, and left more complicated cryogenic reusable designs for later. Such a simplified design would, in effect, be an Apollo LEM Mark 2 with the addition of a storable propellant transfer stage. In a way, this is pretty much the Blue Origin design although it eschews these simpler low-energy propellants.

One other factor: SpaceX may not be able to get its Starship back to Earth. This writer leans on his Master’s degree studies decades ago, in which he came to the conclusion that high lift-to-drag bodies (such as the Starship) re-entering Earth’s atmosphere at super-orbital speeds would have too much convective heating for thermal protection systems to handle, and that a blunt-body vehicle was – and still is – the only way to do it if a direct entry is desired (an alternative is to use time consuming aero-braking manoeuvres).

There is a hint about which concept NASA has most faith in. Of the US$1 billion awarded as the initial contract total, Blue Origin is receiving US$579 million and Dynetics US$253 million, while SpaceX gets just US$135 million. NASA has also expressed public doubts via a technical review about the technology readiness of all three competing designs’ propulsion systems. It has also noted the operational risks of SpaceX’s in-space refueling operation and made an implied criticism of the firm’s record of missing deadlines for service delivery.

NASA needs to pick a low-tech quick-build lunar lander, using storable propellants, for initial exploration flights and to go for a slower-to-develop but more technically advanced reusable design for longer-term sustainable use. 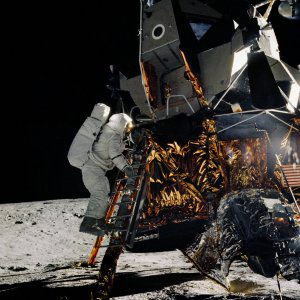