Two NASA astronauts conducted a four hour 11 minute spacewalk from the International Space Station on 12 May 2019. The pair were Peggy Whitson, Expedition 51 Commander, and Flight Engineer Jack Fischer. The hatch was opened at around 1303 GMT and closed at 1714 GMT. 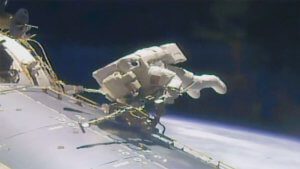 Astronaut Jack Fischer holds onto the side of the ISS. Courtesy: NASA

The Quest airlock is equipped with two SCUs (Service and Cooling Umbilicals). However, one became unserviceable due to a leak meaning that before the spacewalk the astronauts had to share the SCU to top up their power. This limited battery time and cut short the spacewalk by an hour or two meaning that the planned installation of the CP3 high definition TV camera or the EWC wireless antennas had to be moved to a later spacewalk.

The astronauts also completed additional tasks to install a connector that will route data to the Alpha Magnetic Spectrometer instrument. They also repaired insulation at the connecting point of the Japanese robotic arm, and installed a protective shield on the Pressurized Mating Adapter-3 (PMA-3). This adapter will host a new international docking port for the arrival of commercial crew spacecraft.