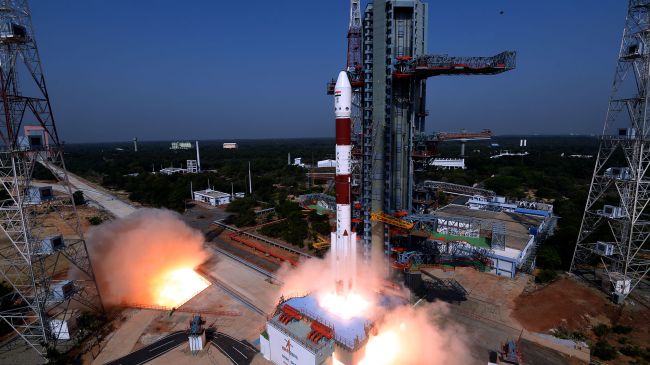 A new version of India’s PSLV rocket made a launch of 29 satellites plus its own repurposed upper-stage spacecraft. This new version was the PSLV QL, which carries four solid rockets instead of the more normal six. The launch took place at 0357 GMT on 1 April 2019 from the Sriharikota launch site.

The 29 spacecraft carried by the rocket included the main payload, the EMISAT, which is a signals intelligence satellite for India’s DRDO agency. The launch also carried 20 CubeSat class Flock 4 imaging satellites for Planet, and four Lemur 2 tracking and weather satellites for Spire.

Also aboard were three IoT (Internet of Things) data relay satellites, BlueWalker 1, M6P (both built by Nanoavionika) and Astrocast 2.0 built by Astrocast itself. Danu Pathfinder is a ship tracking prototype/early spacecraft for AistechSpace. Finally, while its main role was that of an upper stage delivering the 29 satellites, once this was done the PSLV’s PS4 upper stage effectively became a spacecraft in its own right. It sprouted two solar arrays to power an AIS ship-tracking payload as well as an amateur radio one and a scientific payload.

Update on 4 April 2019: After delivering EMISAT successfully in the highest orbit and then moving lower to deliver the other spacecraft into their orbits, the PS4 stage-spacecraft’s final orbit burn was (according to orbit tracker Jonathan McDowell) unintentionally backwards, resulting in an elliptical orbit rather than the planned circular final orbit. However, the M6P and BLUEWALKER spacecraft appear to have been released into this lower, more elliptical orbit compared with the planned orbit.