While the new Vega C can launch 800kg more payload into orbit for about the same price as the current Vega rocket, it remains an expensive rocket at circa US$42 million per launch. As such, the European Space Agency has launched a design programme for a new version of Vega, the Vega E (Vega Evolution). This rocket will be a three stage launch vehicle using a liquid fuel upper stage replacing the Zefiro-9 third stage and the Ukrainian built  AVUM (Attitude and Vernier Upper Module) fourth stage of the Vega C. The new liquid fuel upper stage will use liquid methane and liquid oxygen as its propellants and will be capable of multiple burns.  It will launch payloads equivalent to Vega C’s current 2,300kg for a much lower price that of the current Vega or Vega C.

The European Space Agency is giving the Italian manufacturer Avio €53 million for design of the Vega E. The final go ahead for the Vega E’s development is expected to be given in 2019 with the programme to start in 2024. 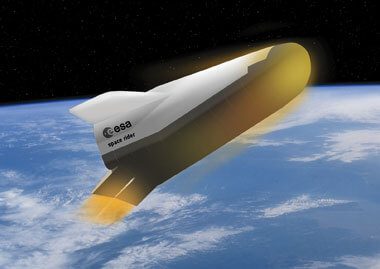 In a similar concept to the US Air Force X-37, the ESA has also funded to the tune of €36.7 million, the development of an unmanned mini-shuttle called Space Rider which will ride on top of a launch vehicle to achieve orbit.  It will be able to operate in orbit via a solar array power system, and be able to make runway landings. The Avio/Thales Alenia Space team share this funding. The Space Rider is based on the Intermediate Experimental Vehicle (IXV) which flew a re-entry test in 2015.