It is congratulations to the team of scientists who successfully proved Einstein’s hypothesis that gravity waves would exist by actually detecting them. The winners were Rainer Weiss of MIT who received half of the financial element of the prize and Barry Barish and Kip Thorne of Caltech who split he remaining half. It was their work with the 4 km long L-shaped Laser Interferometer Gravitiational-Wave Observatory (LIGO) and its subsequent detection of gravity waves from a pair of colliding black holes in September 2015 that won the prize for them. 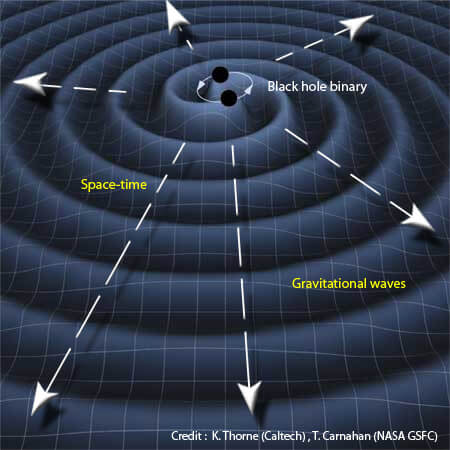 Update on 16 October: A Queen’s University Belfast scientist has led an international team to a historic and ground-breaking discovery, proving that a burst of gravitational waves detected in August came from a smash up of two neutron stars – and that the collision scattered gold and platinum into space.

Moving quickly after the alert, Professor Stephen Smartt from the School of Maths and Physics at Queen’s University Belfast, led an international team based in Chile in scanning the sky for data. Within just 24 hours he and his team, which included Dr Kate Maguire from Queen’s, were able to prove for the very first time in history that the source of the gravitational wave was the merger of two neutron stars. The research findings were published in Nature.

The merger of these extremely dense objects, produced what is a called a kilonovae. The neutron stars are the remnants of large stars that exploded but were not massive enough to collapse into a black hole. They are extremely dense – the equivalent to the whole human race squeezed onto a teaspoon. These kilonovae have been predicted for more than 30 years but until now had never been seen.

In another world first, Professor Smartt’s data shows that following the merger of the two neutron stars, a burst of rapidly expanding radioactive heavy chemical elements, including elements from caesium and tellurium all the way to gold and platinum, were scattered from the kilonova into space, moving as fast as one-fifth of the speed of light. For many years scientists had debated the origins of the elements in the periodic table that are heavier than iron and this discovery is the closest we’ve ever come to solving the mystery.

From the data, scientists now also know that the gravitational wave was about 130 million light-years from earth, making the source both the closest gravitational wave event detected so far and also one of the closest gamma-ray burst sources ever seen. Gamma rays are high energy electromagnetic radiation, just like optical light but 50,000 times more energetic.

Professor Smartt says the bright glow in the sky was unlike anything ever studied in the history of astrophysics. He comments: “This discovery opens up a whole new dawn in physics and astrophysics. Einstein predicted 100 years ago that gravitational waves exist – not only have we now proved this, we have also detected the exact object that caused them – the merger of two neutron stars.

“Since the initial discovery of gravitational waves in 2016, our team at Queen’s, along with many others, have been hunting for a flash or glow in the sky that would pinpoint the exact position of gravitational waves. My team specialises in finding exploding stars and studying the highest energy events in the Universe and we were stationed at the ESO New Technology Telescope on the night that this discovery was made.

“We immediately took a spectrum at the first opportunity – a measurement that splits light up into its different components. When the spectrum appeared on our screens I realised that this was the most unusual flash in the sky that we’ve ever seen. I thought at that point that the merger of two neutron stars was almost certainly the source of the gravitational waves and all of our data confirmed that it was indeed the source.”

He adds: “I had never seen anything like it. Our data, along with that from other groups, proved to everyone that this was not a supernova or a foreground variable star, but was something quite remarkable.”

Dr Kate Maguire, also from the School of Maths and Physics at Queen’s University Belfast and a recent European Research Council grant winner, adds: “The discovery of gravitational waves and a corresponding burst of light from the merger of two neutron stars is one of the most exciting astrophysical discoveries in recent times.

“Our rapid-response triggering and spectral analysis of the event has contributed significantly to the long-debated question of the origin of heavy chemical elements in the Universe. This discovery has paved the way for future missions and studies, in which Queen’s will play a key role, to investigate the final life stages of these incredibly dense stars and the mysteries of their origin.”

Discovery of gravitational waves proves that Einstein was correct

In what is being hailed as one of the scientific discoveries of the century, vying with the discovery of the Read more