SN10 ascends to 10km before its successful landing (even if it did later explode). Courtesy: SpaceX

At this point it was true that the SN10 test flight had achieved the object of its test flight: a high-altitude launch followed by a successful landing at its Boca Chica base in Texas. But several minutes after the landing disaster struck when the craft exploded.

The initial abort happened after a first ignition attempt failed. Minutes later, ignition was achieved and the test flight was successfully made to a planned altitude of 10km. The already perfected technique of a flat pancake orientated descent was then made to slow the Starship craft down. A last-minute pitch up to an engine down configuration also worked well.

This time there was no engine failure to prevent a slow touch down. And instead of just two, all three raptor engines were initially ignited. This increased the chance of having at least one working engine for the landing as during the fast-paced approach there would be little time to attempt an engine reignition.

The troubles started before the landing when an apparent loss of thrust in the braking engine caused a faster than planned touch down. This loss of thrust was later attributed to partial helium ingestion from the fuel header tank with bubbles causing a loss of thrust. The helium was added to keep propellant pressurisation of the propellants ahead of the landing, especially during the horizontal descent. The resulting crunching landing caused two of the Starship’s six deployed landing legs to collapse as well apart of the rocket stage’s skirt.

The partial leg collapse caused the safely landed Starship stage to start leaning over. It also had a fire burning beneath from an apparent propellant spillage. Eight minutes after its landing, the leaning Starship then appeared to have an explosion at its base, which made it jump up from the ground. After this unplanned “relaunch”, the lower structure then exploded with the stage falling back to Earth in flames.

In a news release, SpaceX used Elon Musk’s favourite terminology for an unexpected explosion: “As if the flight test was not exciting enough, SN10 experienced a rapid unscheduled disassembly shortly after landing.”  The cause of the post-landing failure is being investigated. SpaceX is considering allowing the Starship to make the final landing on two engines instead of one in future flights.

The movie clip of the explosion can be seen here: Chris B – NSF on Twitter: “An amazing shot of Starship SN10’s post-landing Rapid Unplanned Disassembly (RUD) after Wednesday’s test flight. ➡️https://t.co/bOsEo1u0u0 https://t.co/FmNtYBFmIe” / Twitter 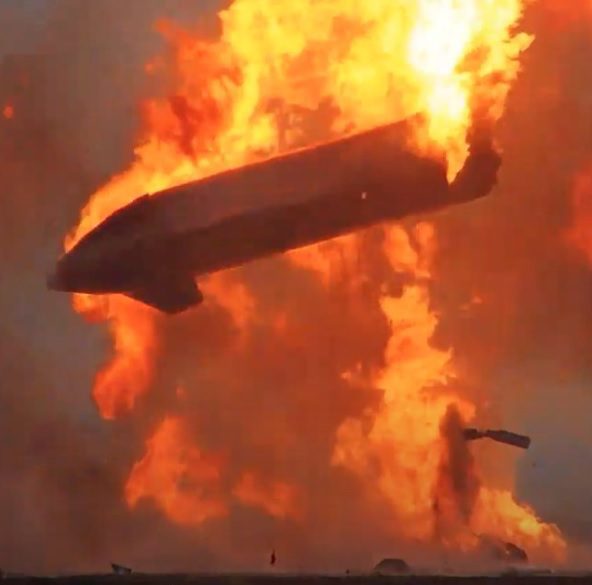 Update on 31 March 2021:  The follow-on test flight on 30 March, again at Boca Chica, the Starship prototype SN11’s flight was also seen to have ended in failure.  While observation of its launch was very difficult due to it being shrouded in heavy sea fog, its telemetry and on-board cameras showed that the launch to 10 km altitude worked as planned.  However, five minutes 49 seconds into the launch the coverage was cut. This was the point at which the three engines were due to be fired up for the descent.  An explosion is thought to have taken place with the carcass of the rocket stage plus some extra debris was seen to fall out of the sky and impact the ground near the planned landing zone.  As Chief designer and founder of SpaceX, Elon Musk, drily noted: “At least the crater is in the right place!”

Elon Musk later revealed that a “hard start” – a high pressure ignition event/explosion caused by too much propellant in the turbopump – had occurred in one of the three rocket engines. The cause is was due to a fire caused by methane fuel leak on Engine 2 during the ascent phase which “fried” part of avionics and which, in turn, led to the hard start.