Those of us thinking about moving house in the UK have long used the UK flood risk map supplied by the Department of the Environment to make sure we are not buying a house too close to a flooding river. Witness how the town of Staines was renamed to make it sound better (actually an attempt at increasing house-prices there). “Staines-upon-Thames”, but which later came to be nicknamed “Staines-under-Thames” when the floods hit.  However, apart from flooding there is a new threat that should be considered when buying a house: Nuclear War.

Given the real possibility of a nuclear war the Korean peninsula which could well spread (well China did take North Korea’s side in the original Korean War) and especially because North Korea has already threatened a “miserable end” to the UK, to help you decide where to live, the US based (real) estate agent eMoov has published a map which rates the risk of a nuclear attack for each area in terms of the fireball, air blast, as well as nuclear and thermal radiation. And jolly interesting it is too. 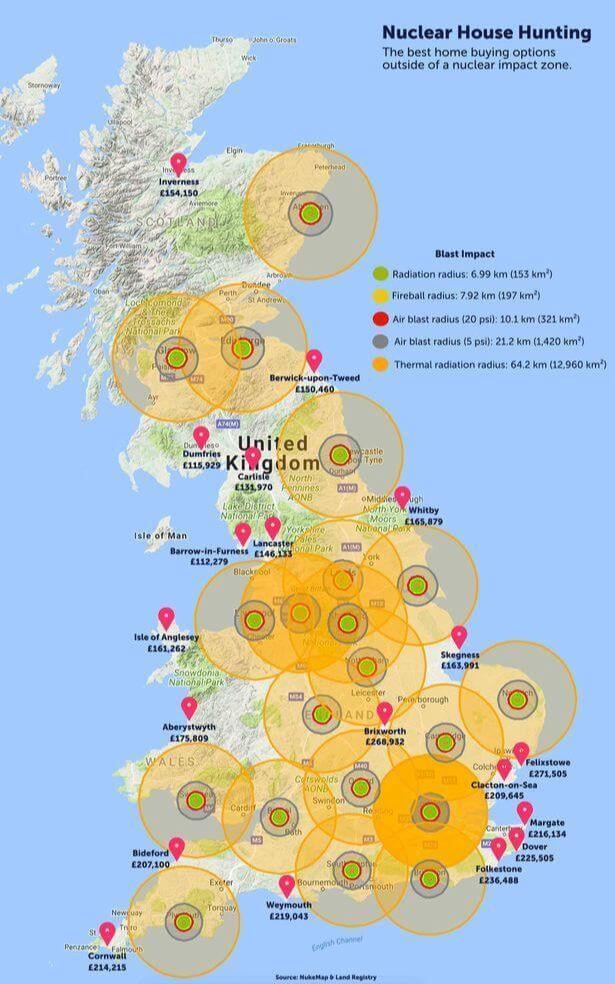 Of course, as a schoolboy during the Cold War your correspondent lived near the Royal Navy nuclear submarine command centre in Northwood, Middlesex near London (actually an under ground nuclear bunker), so he was always going to vaporised in the first wave of a nuclear attack (probably the best way to go in a nuclear war). In fact, one day he even thought that nuclear Armageddon had actually come when his school’s air raid siren-like fire alarm was tested one morning after he had got in early. A change of his school trousers was nearly required.

So is there anywhere on the small island where it is safe to buy a house avoiding a nuclear strike? Apparently, according to the map those living in Skegness on the North eastern coast of England are safe. Mind you given its infamous “bracing” North Sea wind, you might have lost the will to live on there anyway.

Perhaps Cornwall would be nicer.  Although down to the lovely cliff scenery in the BBC’s Poldark drama prices there are already sky high – and of course there is already a radiation risk via its natural granite rocks to contend with.

Inverness on Loch Ness, is a possibility though the monster might have something to say about a lot of new interlopers, and best not get too close to the Clyde river either as the Faslane Naval base there is where the UK’s Trident nuclear missile subs’ are docked making it a prime target.

Looking at the map, Her Majesty the Queen might be wise to also take cover as Windsor Castle is only a few miles away from the strategically important London Heathrow Airport.  Her Majesty’s husband Prince Philip famously noted in a moaning joke about the overflying aircraft noise it receives, that Windsor was a “bloody stupid place to build a castle”.

Windsor, of course, is also targeted –  indirectly –  by the late poet laureate, Sir John Betjeman, in his famous/infamous poem about its near neighbour, the industrial town of Slough, in which he effectively calls for Slough’s destruction in the poem’s first verse:

Come, friendly bombs, and fall on Slough!
It isn’t fit for humans now,
There isn’t grass to graze a cow.
Swarm over, Death!

Then again, perhaps he just wanted to improve it.

Of course, the witty Sir John Betjeman always joked that in the event of nuclear war he would head for the Peter Jones department store in the well-to-do area of Sloane Square, Chelsea, London, so beloved of those rich young “Sloane Ranger” types such as Princess Diana in her youth.

Sir John’s reasoning was that he could envisage nothing bad ever happening in the Peter Jones store, so he would be entirely safe.