While the University of Surrey has an excellent reputation in electronics and space research – it was after all the alma mater of the very successful Surrey Satellite Technology Limited (SSTL) – it has now gained a more worrying recent reputation: its degree standards have apparently dropped. Or rather it has been accused of being too profligate with its top grades: First Class Honours degrees.

The BBC reports that last year the university awarded 41 per cent of its graduates with a First. And the University of Surrey is not alone. As they compete for fee-paying graduates against each other in the overly expanded higher education system, most universities are awarding more First class degrees with nearly a quarter of all graduates now getting one. The Daily Telegraph reports that “grade inflation” has let to a quadrupling of Firsts in some institutions in just eight years. There are now calls to restrict “Firsts” to under the top ten per cent of graduates – back to the rate of 25 years ago. 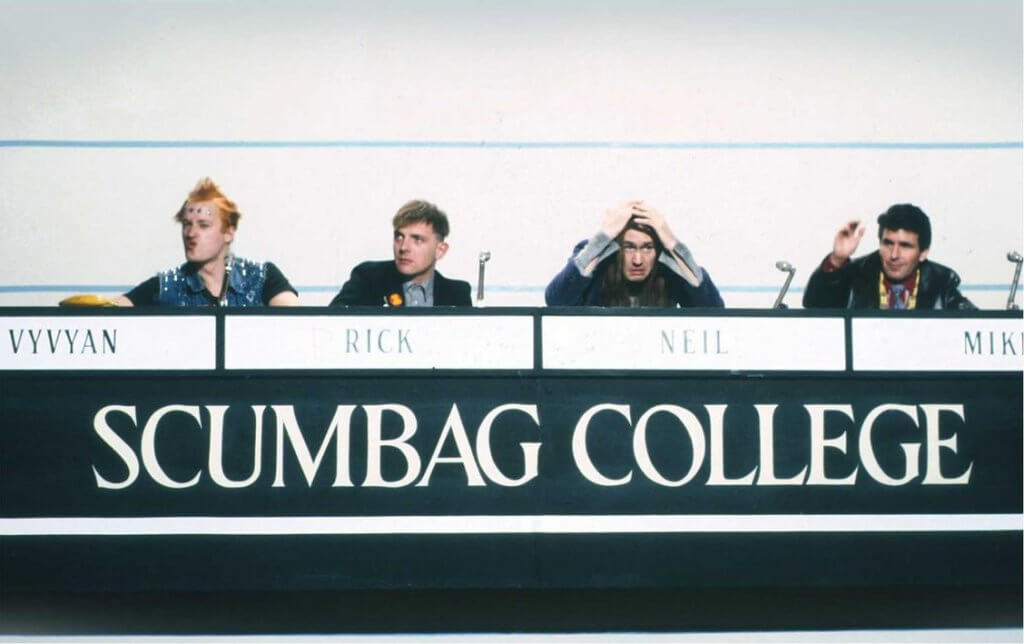 No doubt all of the above students at Scumbag College would all get Firsts – or at least 2:1s nowadays. Courtesy: BBC/The Young Ones

And it is not just Firsts which are no longer a rarity, the 2:1 (upper second) grade has now come to be regarded as the “average” as so many are awarded. And before you argue that kids are smarter nowadays, recent research has found that the average I.Q. has actually dropped in the young.

When your correspondent got his 2:2 (lower second) from Salford University, it used to be the “average” degree and even got nicknamed after the famous South African Archbishop Desmond Tutu. Those of us who got a “Tutu” could at least console ourselves that it was better than a “Douglas” (a cockney rhyming slang for a third… after the politician Douglas Hurd = Third), aka the “drinkers’ degree”, or the even lower “Pass” degree, and that it would not be a barrier to employment or higher study.

Of course, now that the increasingly rare “Tutu” has a similar ranking to a “Douglas” – that is, if you get one you are given a revolver in the expectation that you will do the decent thing  (ok – this is a joke! 🙂 ) – spare a thought for us oldies who thought they were just about ok with their “Tutu” degree classification, but now find themselves demoted to the nearly unemployable.

And if you think that this writer is joking on his latter suggestion, anyone applying for a graduate level job with less than a 2:1 (Upper Second) will normally get their application automatically binned in the first sort by junior staff in the personnel/HR department. A lack of appreciation within HR departments that standards have actually changed over the years means that an “unfair” hurdle now exists for a lot of “oldie” graduates. For even though experience and career achievements should really outweigh any earlier academic ones, older applicants with a “Tutu” or less might be wiser to NOT put their degree classification down on their curriculum vitae/resumes if they are to be considered at all.

By the way, for those who rail against academic snobbery and elitism, they are right. Of course someone with a lowly degree may still be very talented and can still “make it” – with a bit of luck and hard work, skill and application. Famously, Einstein himself did not initially excel academically before he went onto much greater things. It is just that those with a lower degree are less likely to get a “break” to make their career passage easier.

Others in this position might try to make amends by getting a very good Master’s degree. And yes – your correspondent has one of these and a bar – both taken in the good old days when you could still get into the august post graduate institution, Cranfield University (then called the Cranfield Institute of Technology), in Bedfordshire, England, with a lower second.  While this writer found himself there in the company of some very bright graduates from top universities around the world (including some with “Firsts”), he found that he could just about hold his own, and actually did some of his best academic work there. (Apart from studying – there is nothing much else to do at Cranfield except look at the aeroplanes and the sheep.)

By the way, despite a subsequent cull of most of the older Masters’ theses from the Cranfield University library, your correspondent is glad to report that both his theses (one on twin jet engine reliability and one on winged planetary entry) were deemed to be good enough to “make the cut” and remain in there.