On a Lighter Note: Unwanted escapees in Apollo 10’s capsule led to a question of attribution

While the Apollo 10 lunar mission in May 1969 is often overlooked, it was the dress rehearsal for the main lunar landing. It involved hazardous rendez-vous docking and undocking operations, and lunar module descent and ascent engine firing tests in lunar orbit.

The mission has got a little more attention this month due to its 50th anniversary, but one mission event that was not really publicised is the “whodunnit?” involving “mystery of the turd in the capsule”. Vox.com has found the amusing transcript of the event.

Apollo toilet arrangements were very basic. The unpopular Fecal (Faecal) Collection Bag had to be used, sealed and stowed very carefully to prevent any unwanted escapes of faeces (more colloquially known as turds). But mistakes will happen, as this communications transcript between the Apollo 10 mission’s three-man crew explains:

Mission Commander Tom Stafford: “Oh — who did it?”

Command Module Pilot John Young: “Who did what?”

Lunar Module Pilot Gene Cernan: “Where did that come from?”

Mission Commander Tom Stafford: “Give me a napkin quick” … “There’s a turd floating through the air.”

Of course, a turd in the confines of a space capsule would be even less popular than a pork pie at a bar mitzvah. And, in time-honoured fashion, all were quick to deny it was one of theirs.

Tom Stafford: “Mine was a little more sticky than that.”  “Throw that away.”

How very politely described. A similar conversation was repeated a few minutes later when a second unwanted escapee was spotted. Thank heavens there was not a third one, or a cock might have crowed after their third batch of denials.

Of course, all three astronauts also forgot the old schoolyard rhyme – usually made in relation to breaking wind: “He who denied it…supplied it!”

No wonder some Apollo astronauts took Imodium to make sure that they did not have to go on their week-long lunar missions. 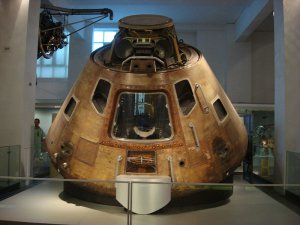 And it is also no wonder that the surviving Command Module capsule that NASA gave to the London Science Museum was, you have guessed it, Apollo 10’s. Let us hope that NASA cleaned it first.

Of course, astronauts’ toilet facilities are much better nowadays and the toilet on the International Space Station uses a fan suction arrangement. But care should be taken lest the sh*t hits the fan!

best of the holiday season – 2007 reviews

Hyperbola has now got its own Youtube channel and that can be found here on Youtube. During the coming weeks Read more

Hey curator, don’t bother bidding for Shuttle Orbiters quite yet