On a Lighter Note: Woody Allen’s The Sleeper was right…Whipped cream is good for you! But coital cardiac arrests are definitely not

The danger of accusing those against a generally accepted wisdom as being heretics is that sometimes the heretics are actually right! The comedian, actor and director, Woody Allen’s early 1970s film comedies (the best things he ever did by the way) sometimes foresaw that the future would disprove these received wisdoms. This scene in his science fiction “vision of the future” comedy movie The Sleeper (1973) has two doctors discussing a 20th Century (actually 1973) health food store owner (as played by Woody Allen himself) after he wakes up from being asleep for two centuries:

Dr. Aragon: [chuckling] Oh, yes. Those are the charmed substances that some years ago were thought to contain life-preserving properties.

Dr. Melik: You mean there was no deep fat? No steak or cream pies or… hot fudge?

Dr. Aragon: Those were thought to be unhealthy… precisely the opposite of what we now know to be true.

And now comes the funny bit! At the European Society of Cardiology Congress being held in Barcelona during August 2017, a Canadian-led study published in The Lancet and presented at the Congress, has found that eating a low fat diet is actually bad for you (see this story in the Daily Telegraph). For about five decades doctors around the world have been advising us to eat low fat diets to protect our cardiovascular systems! So Woody Allen was right…they were wrong! 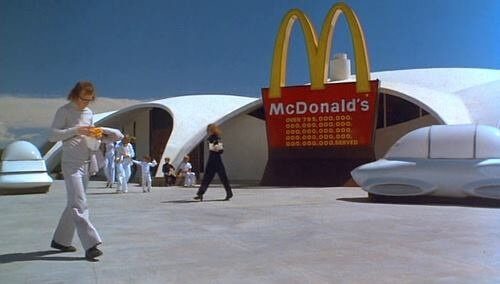 Fat is good: Woody Allen finds himself in the 22nd Century in The Sleeper (1973). Courtesy: United Artists

And for those who may unfortunately have to face heart surgery one day, another paper presented at the same conference (as reported by the Daily Mail) found that being obese actually improves your chance of operative and post operative survival! Its findings have been called the “Obesity Paradox”. Perhaps it is something to do with hospital food being so bad that only the fat patients don’t actually starve during their treatment!

So in other words, just enjoy your life along with its delicious butter, whipped cream, steak, eggs…just not to excess. And don’t stick your head out of a moving train either.

And do, by the way, stick to the sage old advice not to indulge in perverted sex or country dancing. Or, at least, not to excess as well.

Your correspondent, who is “built for comfort and not for speed”, regretted not heeding this advice once at the International Astronautical Congress in Glasgow in 2008 when he nearly had a heart attack while performing a very vigorous activity called “Strip the Willow”.

It is a Scottish country dance by the way.

Mind you, better to have a heart attack doing that sort of astronautical congress activity rather than having one while taking part in congress proper. This is because of a study presented by the Paris Sudden Death Expertise Centre at the Barcelona Cardiology event (as quoted by the Daily Mail) which showed that you are four times as likely to die from a cardiac arrest during sexual intercourse than at any other time. A partner’s embarrassment and subsequent delay in calling the emergency services is cited as the probable main reason.

Perhaps the last word should go to the late great comedy actor Peter Sellers. He had the best quote on the subject after having a near fatal heart attack (actually a series of eight cardiac arrests in one go) during just such a sex session with his then much younger wife, the beautiful Swedish actress, Britt Ekland.

“I didn’t know whether I was coming or going,” he said.