On a sadder note: A belated goodbye to the Man who saved Civilisation

Just as the world fears a nuclear war breaking out in the Korean Peninsula, it is a time to remember Stanislav Petrov passed away in May at the age of 77, who was the last man who saved the world from a highly destructive nuclear exchange during the height of the Cold War.

As a 44 year-old Soviet Lieutenant Colonel on duty on 26 September 1983, at an early warning control centre just outside Moscow, Petrov found himself literally alarmed by an infra-red scanning Soviet early warning OKO satellite which was indicating that a launch of a small number US ballistic missiles had taken place against the USSR. A second alarm followed warning of a second launch. Calmly Petrov knew that a real pre-emptive strike made by the USA would probably involve many more missiles. As such he told his team to wait for ground radar confirmation of the launches before they informed the Soviet high command who would have probably ordered a retaliatory nuclear strike had they done so. Thankfully, the radar confirmation of the missile attack never came as the warning was indeed due to fault on the OKO satellite’s detection system. It had thought that the sun’s reflections of high altitude clouds over North Dakota were a missiles’ tail fires. 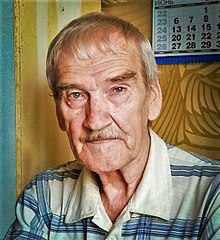 While never celebrated in the Soviet Union and later Russia, Petrov eventually came to be realised as the “man who saved the world” or at least “the man who saved civilisation”. It is generally accepted that an all out nuclear war between the Warsaw Pact and NATO would have knocked back civilisation back into the Middle Ages, while nuclear fallout could have seriously damaged the genetics of biological life including the human race.

Addendum: Stanislav Petrov is not the only man with a claim to have saved the world from nuclear war. During the Cuban missile crisis in 1962, Soviet naval officer Vasili Arkhipov serving on a submarine, refused to give his necessary permission to the Captain of the B-59 boat to launch a nuclear tipped torpedo at US Naval vessels.