We are sad to report that the former Apollo 11 command module pilot and astronaut – and very much an unsung hero of the mission – Mike Collins has died of cancer at the age of 90. It was Collins’ role to orbit the Moon on his own in return Command and Service module – sometimes in radio silence as it passed behind the Moon – while his crew mates Neil Armstrong and Buzz Aldrin made their landing in their lunar landing craft. It was a personal dread of Collins that should something go wrong and the pair’s ascent craft could not rendezvous with his spacecraft he would have to return to Earth without them. In the end, however, the mission was a total success.

Collins interest in aerospace really started after he gained a degree in Military Science at the US Military Academy at West Point. Instead of joining the US Army afterwards, Collins decided to join the US air force and became F-86 jet fighter pilot. He later became test pilot at Edwards Air Force Base flying a variety of aircraft including the F-104 Starfighter and the B-57 bomber before he joined the Astronaut corps in 1963.  In 1966, Collins flew on Gemini 10 iwith John Young, during which Collins performed two spacewalks. Collins selected for the historic first lunar landing attempt, Apollo 11, which took place in July 1969. While some astronaut egos rubbed up against each other – most notably those of his crew mates Neil Armstrong and Buzz Aldrin – Collins was well-liked by both. 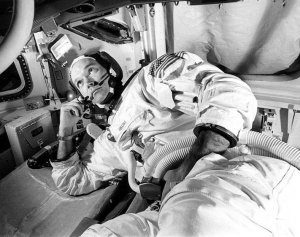 Michael Collins, of course, found that his role on Apollo 11 was largely overlooked on the crew’s return but took part in the world tour that the crew was made to undertake.  Collins left NASA in 1970, and after brief period at the Department of State, he became Director of the Air and Space Museum in Washington D.C., later becoming undersecretary to the entire Smithsonian.  For a time he worked for LTV Aerospace and later as a consultant.  Collins was by all accounts a fine pilot, astronaut and man. We give him our salute and our condolences to his family and friends. 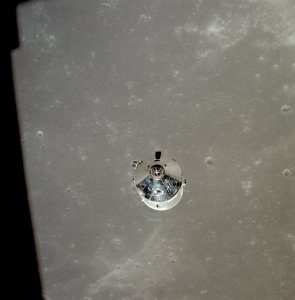 Apollo 11’s Command Module with Mike Collins aboard, as imaged from the lunar module. Courtesy: NASA