On a sadder note: World famous astrophysicist and an example to many Professor Stephen Hawking passes away

Professor Stephen Hawking, the eminent theoretical astrophysicist, has died at the age of 76 – about 50 years longer than he was expected to live. A victim of motor neurone disease, diagnosed while he was a postgraduate student in his early twenties at Cambridge University, he became trapped in his own body. This and emergency operation-related damage to his voice-box meant he could ultimately only communicate via a head movement programmed voice synthesiser – one with a US accent. This did not hold him back, however, and he went on to become one of the most acclaimed scientists and scientific communicators of modern times.

While his friends noted his intelligence at school – even nicknaming him “Einstein” – it was not until he got to university that he really shone. He graduated from Oxford University with a First – but only after a “viva” oral examination panel awarded it to him as his lazy complacency in the written examinations had made him a borderline case. “If you award me a First, I will go to Cambridge. If I receive a Second, I shall stay in Oxford, so I expect you will give me a First” was his successful gambit in the viva. While at Cambridge in 1974 he outlined his theory that black holes emit radiation, later called “Hawking radiation”. He went on to become Lucasian Professor of Mathematics at Cambridge – a post once held by Sir Isaac Newton – and to popularise theoretical physics. Hawking later set out to prove a theory of everything by making a union between the theory of relativity and quantum physics. He reached world attention with his simplified science book A Brief History of Time in 1988, which sold more than 10 million copies. Hawking went on to write other books popularising science. 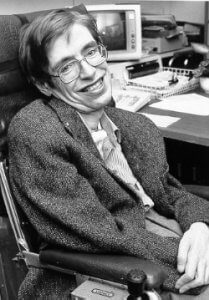 By this time world famous for his scientific intelligence and his refusal to be held back by his physical condition, Hawking showed off his sense of humour by making several cameo appearances as himself on popular television shows. These included the cartoon comedy The Simpsons and that comedic celebration of scientific geeky nerd-dom The Big Bang Theory.

Hawking often had intellectual disagreements with his fellow physicists and their theories, especially over whether “information” is lost in a black hole when it disappears. He also liked to bet against the theories of his fellow scientists, famously losing a $100 bet with Gordon Kane of Michigan University that the Higgs Boson particle would not be found. It was proven to exist by the Large Hadron Collider in 2012 and Peter Higgs, who originally postulated the theory of its existence, won a Nobel Prize for Physics in 2013.

Although Hawking did not win a Nobel Prize, he was indirectly responsible for the award wins of others. He was a gallant loser when he recommended that his one-time critic Peter Higgs should win the Nobel Prize after the Higgs Boson was discovered. In a separate field, Eddie Redmayne beat Benedict Cumberbatch to the best actor Oscar (Academy Award) with his portrayal of Hawking in the excellent movie about his life: The Theory of Everything (2014).  Before this, the also very good BBC docudrama film Hawking starring Benedict Cumberbatch made a similar more detailed attempt to cover the early part of Hawking’s academic career as he worked with singularity “black hole” predictor Roger Penrose.

Hawking harboured two unfulfilled aspirations: to win a Nobel Prize himself –  he did not win one as his theories have yet to be fully proven experimentally or observationally – and to go into space. While he did experience the microgravity conditions on a NASA parabolic aircraft flight, a plan for him to fly into space on a Virgin Galactic suborbital spaceflight was scuppered by Virgin Galactic’s much delayed programme.

Hawking was a supporter of human spaceflight, noting that for the survival of the species – given the likely damage to the world by either a man-made cause (eg nuclear war or global warming) or by natural disaster (eg asteroid strike) – it was essential that humankind set up colonies away from the planet.

On his death, NASA paid its own tribute to Stephen Hawking, calling him “a renowned physicist and ambassador of science. His theories unlocked a universe of possibilities that we and the world are exploring.”  By the way, Hawking, like spaceflight innovator and Mars colony enthusiast Elon Musk, also warned about the dangers of artificial intelligence one day usurping humans as being in charge of planet Earth.

While lauded around the world, Hawking famously refused a knighthood partly due to his left-wing politics and partly as a protest against the then government’s underfunding of science. However, he eventually got to meet the Queen and accepted the award of Companion of Honour. He got increasingly involved in politics towards the end of his life, making an impassioned defence of the UK’s National Health Service against the current Conservative government, and criticising US President Trump for his withdrawal from the Paris Accord on limiting climate change.

Given Hawking’s, at best, agnostic views about the presence of a higher being, the funeral was surprisingly held at the Cambridge University church: Great St. Mary’s. Many lined the streets of Cambridge to salute Hawking as the hearse carrying his coffin was driven past.

Professor Stephen Hawking was married twice and divorced twice. He had three children by his first marriage. We give our condolences to his family and friends.

Finally, we salute him for all that he achieved under very difficult circumstances while always maintaining his famous sense of humour.

On a lighter note: Don’t bash the Bishop…Proton wallahs should wear lucky underpants instead…and so should England supporters

It used to be that whenever there was a space insurance conference being held, there always seemed to be a major launch Read more