At the end of November there was yet another sign that the World War II veterans are becoming an endangered species.  Former U.S. President George H. W. Bush, who bravely served as a torpedo bomber aviator in the US Navy and who was even shot down, has passed away at the age of 94. Bush Senior, as he is also known given that he was also the father of U.S. President George W. Bush, was the incumbent President when the Berlin Wall came down and when the Soviet Union  subsequently disintegrated – ending the original Cold War.  He was also known as the instigator of a renewed effort for longer range human exploration – even though this has been slow to happen. He also instigated the removal of the drug-dealing dictator General Noriega via an invasion of Panama. Nevertheless, Bush Senior will be probably be more notably remembered as the President who led USA and its allies (with the help of his military commander General “Stormin'” Norman Schwartzkopf) in prosecuting the First Gulf War which successfully liberated Kuwait from Saddam Hussein’s Iraq.

Using primarily air power with its satellite-targeted and laser-targeted weaponry, the allies had an overwhelming advantage with which it ground down the Iraqi army’s firepower to the point of not being able to resist the subsequent blitzkrieg by (mainly) US and British tank formations thrusting directly into Iraq.

There was a price to pay however. It was First Gulf War’s deployment of US troops in the Islamic holy land of Saudi Arabia which triggered a wave of anti-American sentiment  and which, in the end, led to the infamous Al Qaeda attack on the White House, World Trade Center and Pentagon in 11 September 2001.

It was also President George H.W. Bush’s humanitarianism in that original Gulf war which, in a way, did not serve the world well.  For it was his humanitarian sympathy after he saw images of the destruction of a fleeing Iraqi republican guard column, in combination with fears that the allied coalition might crumble, which led to his executive order to end hostilities. This allowed Saddam Hussein’s regime to survive (much to Bush Senior’s surprise) which was then later able threaten the Bush family itself via an assassination conspiracy.

It was Bush Senior’s “unfinished work” in failing to remove Saddam Hussein which led his son, U.S. President George W. Bush, to later prosecute the Iraq War (aka the second Gulf War) in 2004 on the pretext of Iraq’s supposed “weapons of mass destruction” –  which by then did not actually exist.  Even his father George H.W. Bush reportedly doubted that the casus belli was good enough. While this second war was successful in removing Saddam Hussein from power, the remaining political chaos ruined the chances of political peace in the Middle East, and, via the rise of the so called “Islamic State” further increased the Islamic threat to US citizens around the world. 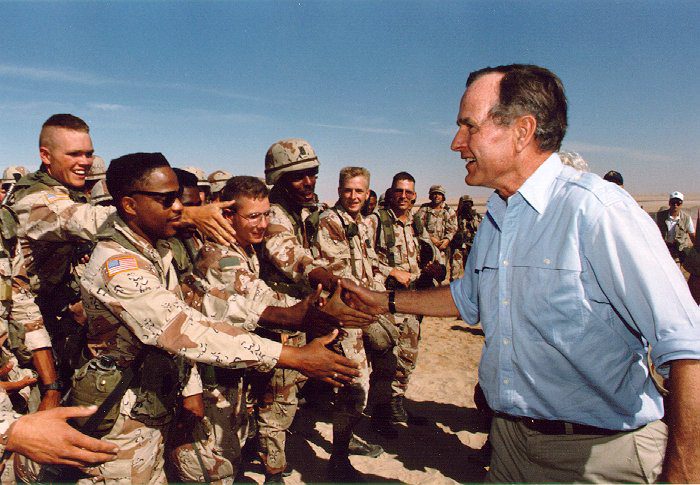 After making his money in oil in Texas, George H. W. Bush became a Republican Congressman, although unlike his father Senator Prescott Bush, and he failed to be elected as a Senator. However, he rose via ambassadorships and via his leadership of the CIA, to eventually become US Vice President to President Ronald Reagan. He succeeded Reagan as a presidential candidate and was duly elected as US President in November 1988. He served just a single term President serving between 1989 and 1993 losing the White House to Democrat President Bill Clinton over the poor state of the economy (albeit that a recovery was actually underway), and over Bush’s imposition of new taxes which he had previously vowed not to do.

In respect to space policy, it was the George H. W. Bush presidency which initiated the project to construct the International Space Station (then called Freedom) which has since become regarded as a nice-to-have but very expensive-to-build white elephant. This space station was supposed to be the start of a long term plan to return humans to the Moon and go onto to Mars and which was dubbed the Space Exploration Initiative (SEI). However, in the end, the costs were prohibitive and this plan remained, until recently, just a paper project.

President George H. W. Bush’s reputation for goodness and professionalism was slightly impinged by his alleged knowledge of the Iran-Contra affair in his time as Vice President, for his choice of Dan Quayle as his own Vice President, and by his admission and apology for some later minor groping incidents. Nevertheless, overall, history has been kinder to the reputation of the Presidency of George H. W. Bush – especially over his foreign policies – than it has been to that of his son George W. Bush. Although given the current Trump presidency, even the latter is now being reassessed.