With just two months to go before he would have celebrated his 100th birthday, His Royal Highness Prince Philip, the Duke of Edinburgh, died in peace at Windsor Castle after suffering a recent deterioration in his health.  Prince Philip is most famous for being Her Majesty Queen Elizabeth II’s husband.

The couple originally met when he was a naval cadet at Dartmouth and she was a teenage princess.  But she took a shine to this handsome young Greek/Danish royal prince of German descent, and, despite reservations of the Palace household, the couple were married in 1947.  He was, by this time an accomplished Royal Navy officer having served with distinction in action during World War II surviving being bombed by the Luftwaffe in the Mediterranean. Having initially served on cruisers in quiet troop convoy escort duties, he was “mentioned with dispatches” for his key role as the searchlight officer on HMS Valiant when a squadron of three Italian heavy cruisers blundered into the Royal Navy battle fleet at night and were summarily blown apart at point blank range.  Prince Philip’s own funeral included the famous “action stations” bugle call that he so often heard during the war.

Later in the war Prince Philip served on destroyers. During the allied invasion of Sicily. he was said to have devised, with his captain, a successful plan to to fool a Luftwaffe bomber into desisting its attack on his destroyer by the ingenious use of smoking floating decoys. At the very end of the war, Prince Philip was present at the Japanese surrender in Tokyo Bay on 2 September 1945. 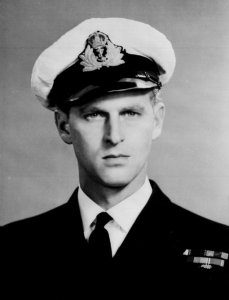 After the war, after a period on Malta-based destroyer, Prince Philip gained command of HMS Magpie, a Malta-based sloop (small frigate).  His naval career, and the couple’s enjoyable time with their young family on the island, was ended in 1952 when Her Majesty ascended to the throne.  In this capacity, became very much gave strong support throughout her reign even if he had his own interests and charities to attend to.

Prince Philip’s achievements are numerous. His own love of sport and the outdoor lifestyle which had had acquired while at the private Gordonstoun school in Scotland, led him to set up the Duke of Edinburgh award scheme for young people which involved a strong outward bound element. Prince Philip became an ardent supporter of nature and the environment well before it was fashionable, helping to set up the World Wildlife Fund (now known as the Worldwide Fund for Nature), becoming its first president.  He was also very much a fan of science and engineering and did what he could to encourage it in the United Kingdom and helped to found the Royal Academy of Engineering.

Prince Philip learned to fly and piloted several types of aircraft and had a strong interest in aviation and space.  He met (with the Queen) several of the famous early cosmonauts and astronauts including first man in space, Yuri Gagarin, and the Apollo 11 first lunar landing crew.

Prince Philip was known for his intelligence, his wit, his charm, and for his enquiring mind. He was also known for his direct and forthright style. However, his irascible nature and occasional lack of sensitivity was tempered by genuine care for people. Princess Diana was said to be genuinely touched by how he had tried to support her during the time when her marriage to Prince Charles was on the rocks. Perhaps he sympathised over the pressures on an outsider within the Royal Family having once been one himself. Nevertheless, Prince Philip was said to be less forgiving of his other daughter-in-law, the Duchess of York, after her antics broke yet another royal marriage.

Regarded as a god by a tribe on the South Pacific island of Tanna, Vanuatu, in the South Pacific (Prince Philip was actually a Christian) that did not mean he did not make some very public mistakes. After Prince Philips death, his grandson Prince Harry described him “a legend of banter”. Nevertheless, in between the wit and wisdom his later life was peppered with some tactless “foot in mouth” gaffes, some of which were not very politically correct. Nevertheless, in between faux pas such as infamously insulting the Chinese over their oriental physical attributes, Prince Philip managed to get in a few quips about space, taking photographs, the downsides of Windsor Castle, and about his daughter Princess Anne.

In 1991, Prince Philip visited NASA’s headquarters in Houston, Texas, where he sat in the command seat of a space capsule simulator, which he then had to dock. “It was like a bloody great mechanical copulator,” he said.

In 2001, thirteen-year-old Andrew Adams was at summer school at Salford University (Prince Philip had previously been its Chancellor) where the NOVA British space project is based. He was admiring one of the rockets when the Duke of Edinburgh asked him if he would like to travel into space. When he said yes, the Duke told him: “You’ll have to lose a little bit of weight first. You’re too fat to be an astronaut.”

Prince Philip once noted in a moaning joke about the overflying aircraft noise that Windsor Castle receives from Heathrow Airport, that Windsor was a “bloody stupid place to build a castle”.

The Prince’s impatience showed through at a group photograph session on the 75th Anniversary of the RAF’s 1940 victory in the Battle of Britain when he exclaimed to the photographer: “Just take the f***ing picture!”

Her Majesty the Queen with her consort and support HRH Prince Philip The Duke of Edinburgh on the balcony of Buckingham Palace. Courtesy: militarywikia.org

In a separate amusement Prince Philip is verbally referenced by Sid James’ character in the comedy Carry on Camping (1969) for his style of always keeping his hands behind his back as he walked behind the Queen. And that is the point. As her consort, Prince Philip was always behind Queen giving his strong support.

We give our salute to Prince Philip, the Duke of Edinburgh, for his exemplary war service, for all his work, and for his support to Her Majesty. We give our condolences to the Royal Family and to all his friends.

We are also sad to note the death of British actress Helen McCrory from cancer at the age of only 52. McCrory was married to actor Damian Lewis had for many years had been in his shadow. Nevertheless, her career had recently begun to flourish including a major role of Polly Gray in the 1920s-set BBC period crime drama Peaky Blinders and as Cherie Blair in the movie The Queen (2006). She also appeared in three of the Harry Potter films as Narcissa Malfoy. and had a role in the excellent James Bond film Skyfall (2012).  Ms McCrory later received an OBE for her work.  Helen McCrory and her husband gained plaudits for helping to found and support the charity FeedNHS, providing food for health staff during the Covid-19 pandemic.  We give our salute to her for her work and our condolences to her young family and friends. 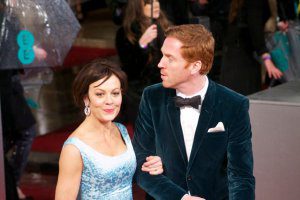 We also note the passing of UK politician Baroness Shirley Williams, one time Labour front bencher, she later became part of the break away Social Democratic Party (SDP) which later joined with the Liberals to become the Liberal Democrats.  Nevertheless, it was her time as Labour Secretary of State for Education during the late 1970s in which she caused the most changes by ending the old “11 plus” exam for most which sorted children into those going to “academic” Grammar schools which were broadly equivalent to the best private schools, and those going to “Secondary Moderns” to teach them more practical/artisan skills.  As such, many very able “late developer” pupils found themselves forced by a single exam into having non-academic careers.

While a few counties in the UK decided to retain Grammar schools due to their academic excellence, Secondary Moderns were soon shut down as they were seen by most as being a very much second rate education. In their stead, Shirley Williams introduced “Comprehensive” state schools which had exam-free entries, and which covered all ability ranges. While this ended the unfairness of the old system, nevertheless the change was viewed by some as being detrimental to social mobility, preventing many able pupils from lower socio-economic backgrounds from achieving the best of their abilities.

As it was, some would-be high achievers were held back by the difficulty of being taught in mixed ability classes, albeit that subsequently introduced subject streaming-by-ability somewhat helped in this regard. More recently, a rise in state school achievement – in part driven by the increased participation of the middle class families who have found themselves increasingly priced out of expensive private education – has given more credence to Shirley Williams’ and her mentor Anthony Crosland’s original idea.

As such, we give our condolences to Shirley William’s friends and family. 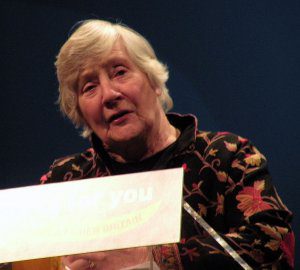 On a lighter note: Prince Philip’s words of wisdom about space

As someone who has a tendency to say the wrong thing at the wrong moment, it is always a joy Read more