The “very English” much loved film and television actor Sir Roger Moore, who played both British super-agent James Bond and do-gooder hero Simon Templar in The Saint, has died from cancer in Switzerland at the age of 89. Born in Stockwell, London, in 1927, Moore – with his male model looks – joined the acting profession after serving in the army. He went to Hollywood in the 1950s after marrying the singer Dorothy Squires. However, he really made his name in the British medieval-set TV series, Ivanhoe, in 1958 after which he went on to star in the TV action series, The Saint, during the 1960s.

After appearing in the TV comedy adventure series The Persuaders in the early 1970s, he took on the James Bond 007 role in Live and Let Die (1973), and played it for the next seven films, of which The Man with the Golden Gun (1974) and The Spy Who Loved Me (1976) were probably the best. Current James Bond actor Daniel Craig posted a reference to that film’s theme song as a tribute to Sir Roger Moore: “Nobody does it better”, signing off with “Love Daniel”. Meanwhile, former Bond actor Sean Connery said he would miss Sir Roger as a longstanding friend. 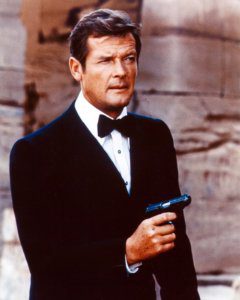 While physically the most like Ian Fleming’s description of Bond, Moore changed the hard, callous Bond character of the books and earlier films (mainly played by Connery) into one you would actually like rather than fear. With his cheesy-but-nice charm and twinkle-in-the-eye double-entendre wit, Moore did, however, retain Bond’s incorrigible seducer trait, along with his schoolboy-like lecherousness.

The space plot of Moore’s fourth Bond film Moonraker (1979) was regarded as too outlandish, even by space aficionado fans, although the reappearance of the villainous henchman “Jaws” was enjoyed, as was the excellent poison pod/capsule re-entry shoot-down sequence near the end. See the full sequence here. 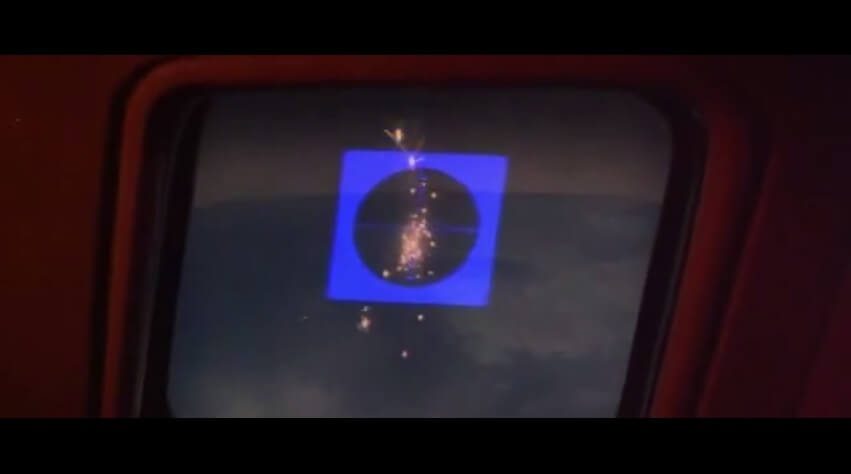 Roger Moore carried on in the role, making three more Bond films, although by this time he was well into his 50s and was criticised for looking (and being) too old for the part.

Moore did make other very enjoyable adventure films during the 1970s including: Gold (1974), Shout at the Devil (1976), The Wild Geese (1978) and North Sea Hijack (1979).  Moore also made the horror mystery Man Who Haunted Himself (1970) which, while not a box office success, eventually became regarded as his best acting performance.

The 1970s were his golden period and by the 1980s Moore’s non-Bond film career was in decline. His later roles consisted mainly of send-ups of himself, including appearing in The Cannonball Run (1981) and starring with the Spice Girls in Spice World (1991).

While his acting ability was sometimes doubted and even ridiculed (especially by the TV puppet show Spitting Image for his famous eyebrow moves), which even Moore himself made fun of, he was generally regarded as a cool suave personality hero by his fans – including this writer.  Moore always tried to be kind to his fans although occasionally they went a bit too far. This writer has memories of a visit to the British Airways offices at Heathrow during the 1990s.  As he prepared to leave in a minibus one of older Indian ladies working in the post room went slightly berserk over her hero and rushed up to the minibus and started bashing on his window while shouting “Roger Moore! Roger Moore!” in her heavy Indian accent. A bemused and amused Roger Moore made funny faces at her through the window as she did so.

Moore later wrote an amusing two-volume autobiography describing his life, which hit the best-seller lists. Moore did good works outside of filmmaking, becoming a UNICEF goodwill ambassador in 1991. His charitable work, of which he claimed he was most proud, later won him a knighthood.

Unlike the James Bond character, Roger Moore was not a womaniser, but he could be classed as a serial monogamist, having been married four times. Moore’s previous marriages tended to end bitterly, usually because he left wives who still loved him. Sir Roger finally settled down contentedly with Danish-Swedish socialite Kiki Tholstrup. Moore had three children with his Italian third wife, Luisa Mattioli, and had previously been married to the actress Doorn Van Steyn and, as has already been mentioned, to the singer Dorothy Squires.

We salute Sir Roger Moore for his amusing self-deprecatory style and for his entertaining and charitable work, and we give our condolences to his family and friends.

Post Script: We also say goodbye to actor Geoffrey Bayldon, who has passed away at the age of 93.  Amongst a long list of TV roles, he played the accidentally time-travelling scruffy medieval wizard Catweazle in the early 1970s TV series of the same name.  Bayldon also briefly played a past alternative First Doctor in two radio adventures of Dr Who, having previously turned the part down in the science fiction TV series aimed at the young.  On the subject of children’s television, we also say a sad goodbye to John Noakes, 83, who presented the BBC’s Blue Peter from 1965 to 1978. His willingness to take on adventurous and sometimes scary assignments on the show made him almost as popular with children as his colley dog Shep.