On a sadder note: Professor of space science and fun Heinz Wolff passes away

We are sad to report the death of the well regarded Professor Heinz Wolff at the age of 89. When it comes to what most people’s imagination of what a space scientist should be, most imagine that he should have a mad hair style and German-Jewish accent like Einstein  And so it came to be that with his bald head but bat like side hair, and with his strong German Jewish accent, Professor Heinz Wolff fitted that bill exactly.  Having escaped Germany with his family in 1939, Professor Wolff later studied Physiology and Physics at University College, London.  He made his academic name in bioengineering and space research at Brunel University in Uxbridge, London, acting as an adviser to the European Space Agency.  He was also involved in planning the Mir space mission of the first British Astronaut Helen Sharman. However Heinz Wolff really came to public prominence on the BBC television show “The Great Egg Race” – possibly because he sounded and looked like a “mad professor” – in which he challenged teams to make machines out of scrap parts. 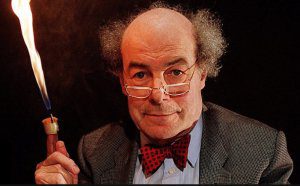 See Professor Heinz Wolff explain in his fast talking German accent, why Britain is good at invention but not profiting from its inventions on the BBC here.  He was intelligent, entertaining and fun, and he drew many into science and engineering as a result of his television appearances. We give our salute to him and our condolences to his family and friends.