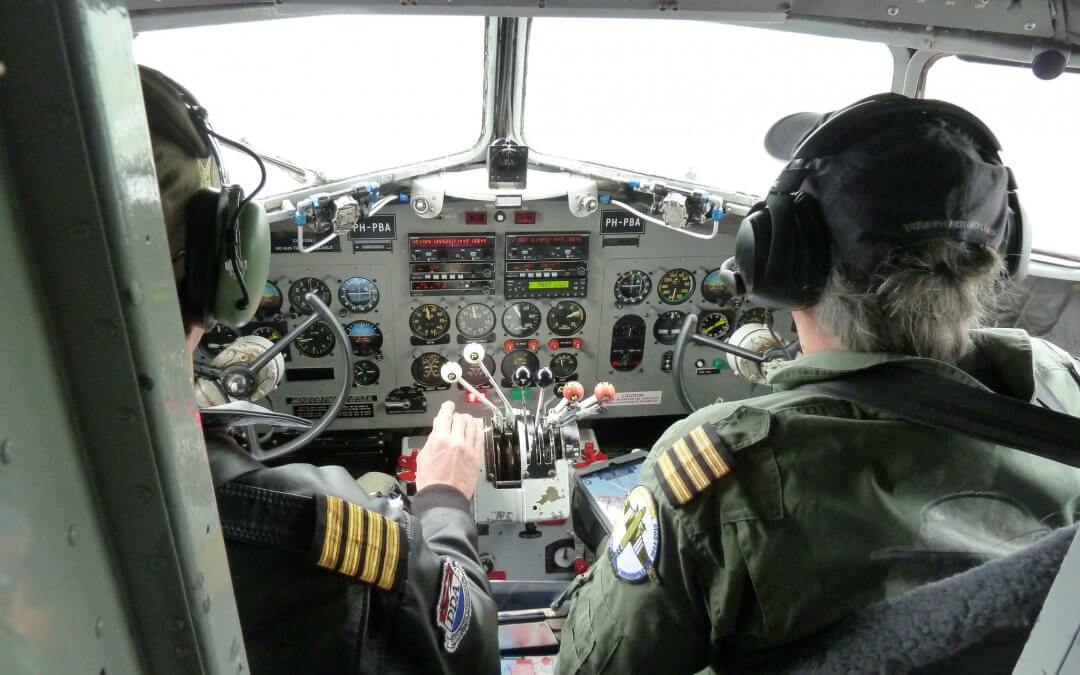 Now that Boeing faces legal action over its design process and over its failure to ground the faulty Boeing 737 Max aircraft, some wonder why it was ever designed like that in the first place.  Nevertheless, there will always be a tension between what is safe and what has worked in the past, and what improvements can be made which can been deemed as too risky to use.  For the culture of Health and Safety is a double-edged sword.  Unfortunately – sometimes at the demand of too risk-averse organisations – or more often their insurers – previously fun but not zero risk activities have been banned even if the risk of serious injury remains infinitesimally small.  The schoolyard game of conkers comes to mind.  It has now been banned by many schools in the UK.

When it comes to aerospace, those with an elementary understanding of probability will note that for the most part, commercial flying is very safe with fatal accident rates averaging about one in one million flights for “Western-built” passenger jet aircraft and that this is sometimes closer to one in ten million for some jet aircraft types. That said, statistics also show that some types of aircraft are inherently less safe than others.  For example, the accident record for helicopters is significantly worse than for fixed wing aircraft.  And so it was for this reason that when you correspondent had the chance to fly over the Grand Canyon a few years ago, he chose to do it in a fixed wing DeHavilland Twin Otter aircraft rather than a helicopter.  Tragically this decision was vindicated a few months later when a helicopter from the same Papillon firm he was flying with, sadly, did have a fatal accident during one of its Grand Canyon tours killing three British tourist passengers aboard. 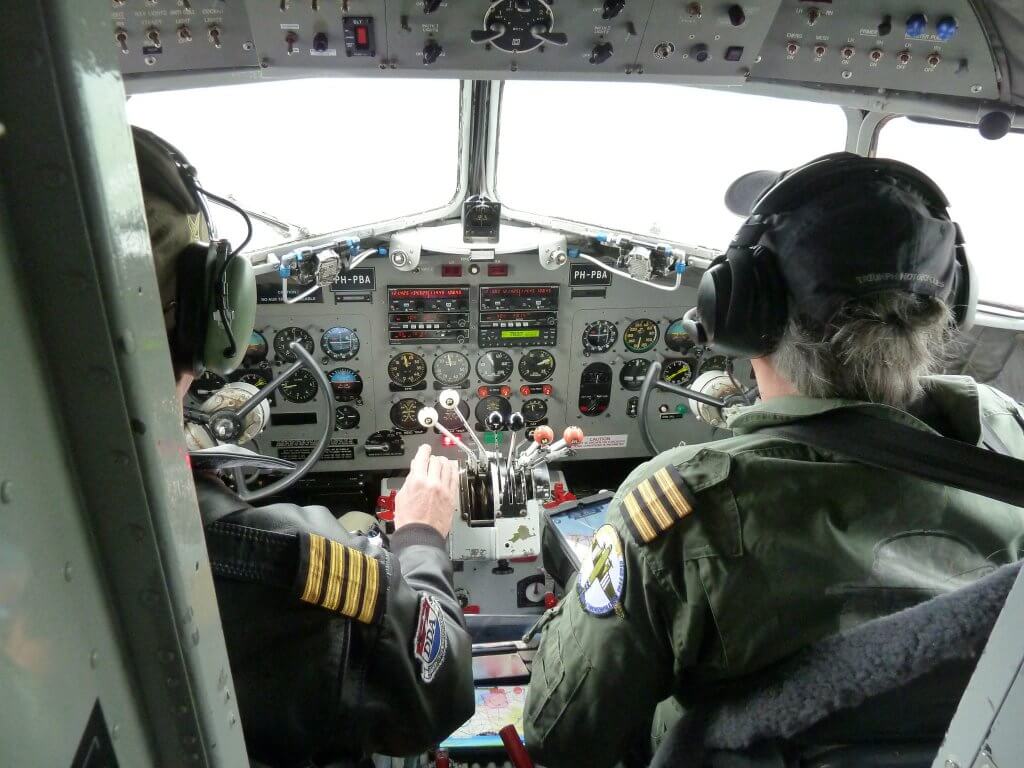 Dodging the clouds in the DDA DC-3 cockpit of PH-PBA. Courtesy: Alexis Gorgues (Used with permission)

Of course, there are some types of aircraft whose safety record is even worse than a helicopter.  One example is the V-22 Osprey which is a hybrid between a helicopter and a fixed wing aircraft.  It had several crashes during its development. As it is, in its vertical landing or hover mode making a successful helicopter-style auto-rotation emergency landing does not look like a real possibility.

It was for similar reason that this writer criticised the original notion for the SpaceX Crew Dragon of making rocket powered vertical landings with its side-mounted SuperDraco engines.  If one of these engines conked out at circa 500 feet altitude – the emergency parachute system would not have had time to work, and the result would have been devasting fall and impact.  While this landing technique has, thankfully, been given up in favour of parachute slowed splashdown, the side-mounted location of the SuperDraco thrusters remains.  The recent test stand destruction of a capsule showed flying on a CrewDragon with its hypergolic fuels and side-mounted SuperDracos (these are now used just for emergency escape) remains a risky prospect for space tourists.  Hotel and space entrepreneur, Robert Bigelow, has recently announced that he is offering booked SpaceX Crew Dragon “seats” to the International Space Station (ISS) for circa US$52 million. 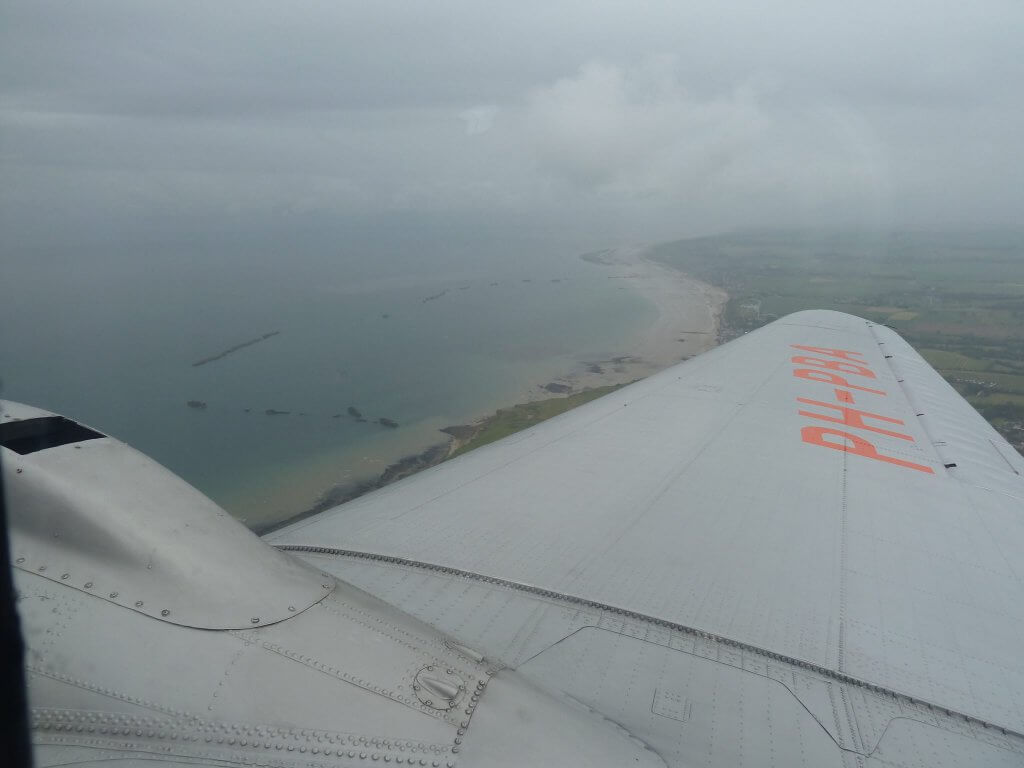 Passing the Mulberry Harbour remnants at Arromanches. Dodging the clouds in the DDA DC-3 cockpit of PH-PBA. Courtesy: Alexis Gorgues (Used with permission)

Having said all that, there should always be another calculation made on whether a flight should be rejected – or accepted: risk versus reward.  This was part of the reason while the venerated Apollo programme was so successful. The acceptance that its high risk was balanced by its high reward was the reason why that Apollo 8 mission around the Moon was allowed to take place in late 1968. At the time NASA thought that the Soviet Union was likely to beat it to the Moon. The gamble paid off for NASA and this mission laid most of the ground work for the successful Apollo 11 landing in July 1969. 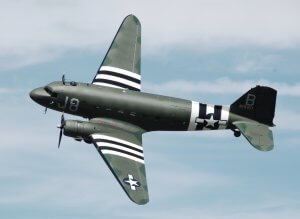 Another DC-3/C-47 with D-Day stripes on. Courtesy: military-wikia.com

And so, your correspondent, having chalked up several classic commercial aircraft that has previously flown on, Airbus A310, Concorde, Dragon Rapide, Boeing 747-100, BAC 111, Hawker Siddeley Trident, L-1011 Tristar, Boeing 727 etc.found there was one still very much obviously missing in his notional log book: the Douglas DC-3 (aka C-47 Dakota).

Thus, while appreciating that old aircraft with their less than reliable piston engines are much less safe than modern day jet airliners (historic aircraft have a fatal accident record more like one in 100,000 flights), nevertheless your corespondent gleefully took his chance to fly in one during the latter part of the D-Day celebrations. And even if he had fully appreciated that the operator itself had suffered a fatal accident to its previous DC-3 about twenty years ago – due to an engine failure compounded by poor propeller feathering mechanism maintenance – he still would have taken the flight as the operator, with its good record since, had obviously learned from its mistakes,

Operated by DDA Classic Airlines, DC-3 called Princess Amelia (Registration PH-PBA) normally flies charter sightseeing flights from near Amsterdam.  This year it was overflying the beaches and battlegrounds of the D-Day campaign as part of the multi-DC-3 Daks over Normandy event at the 75th anniversary of D-Day landings. Sadly, it no longer carries the olive green with black and white D-Day allied markings that it originally wore as it dropped some very brave US parachute troops over St Mere Eglise on the still dark very early morning of 6 June 1944, when it even got shot up and had to return with anti-aircraft shell damage. Nor is it in the original livery of its one time sponsor KLM. However, it now sports the Dutch national colours which is apt given that it was once owned by Dutch royalty – hence its Princess Amelia name.

And jolly marvelous this flight was too – with passengers allowed to move around the aircraft after take off – even getting good views of the door less cockpit (post 9-11 security prevents this on larger types of aircraft). The risk/reward ratio had been right.  Recommended if you get a chance.

One final thing.  SpaceX leader Elon Musk still aspires to making his rockets the workhorse “DC-3” of space.  While this writer has his doubts about the Crew Dragon – and especially its safety, he hopes that Elon has success in achieving this aim with his larger Starship/SuperBooster (BFR) combination.