An Antares 230 medium launch vehicle has carried the Cygnus OA-8 (Gene Cernan) resupply mission to Low Earth Orbit (LEO) on its way to the International Space Station (ISS). The launch occurred at 1220 GMT on 12 November, a day later than originally planned, due to a last minute launch scrub caused by a private light-aircraft straying into the exclusion zone around the Mid-Atlantic Regional Spaceport (MARS) located at the NASA Wallops Flight Facility, Wallops Island, Virginia.

Both the Antares rocket and the Cygnus cargo craft are built by US-manufacturer Orbital ATK (a firm currently in receipt of a purchase offer by fellow manufacturer Northrop Grumman).  While the launch went successfully, there was an admitted slight “over-performance” on the rocket.  As a result, the Cygnus OA-8 craft, which has the secondary name of S.S. Gene Cernan after the late Apollo astronaut, was left in a slightly higher orbit than planned.  However, this did not affect the mission and a burn correction during its orbit raising allowed a rendezvous with the ISS to take place two days later.

The ISS Canadarm-2 captured the Cernan at 1004 GMT on 14 November.Berthing of the 6.6-tonne Cernan at Unity nadir port was completed at 1215 GMT the same day (timings from NASA via Jonathan McDowell) 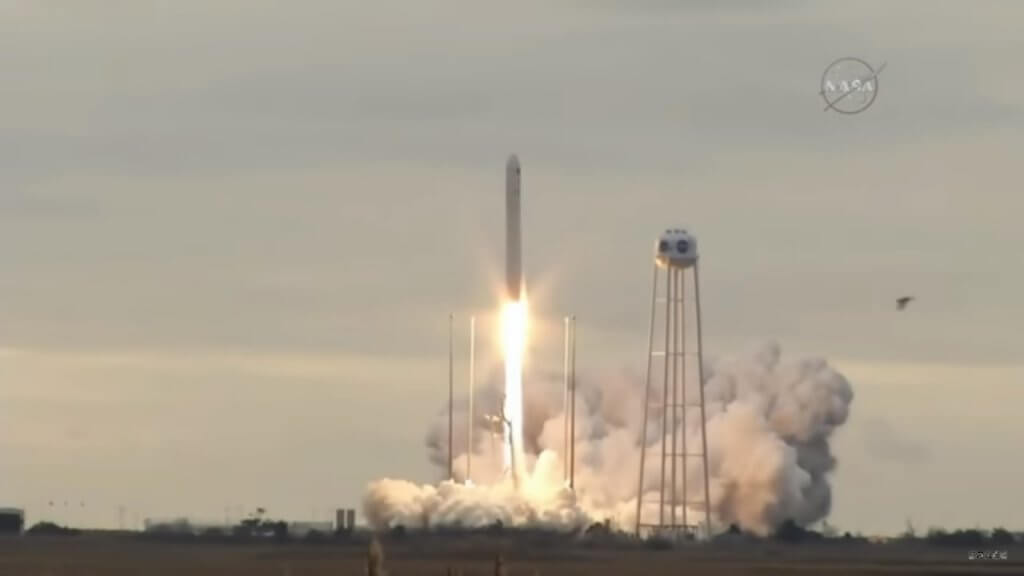 The Antares 230 rocket lifts-off from Wallops Island with CYGNUS OA-8 and other payloads. Courtesy of NASA

This Cygnus mission is part of the first CRS (Commercial Resupply Services) contract between NASA and US companies to provide cargo services to the ISS. This mission carried circa~ 3,500 kg of cargo and experiments to the ISS. Alongside the more vital crew supplies, is a NanoRacks deployer installed on the outside of the Cygnus craft, this contains 14 cubesats waiting to be deployed at the end of the mission – there are two other cubesats which will be unloaded and deployed from the station itself.

The additional passengers on the OA-8 mission waiting to be deployed from the cargo craft are: eight LEMUR-2 3U-cubesats for GPS-occultation data company Spire Global; two OSCD (or AEROCUBE) 1.5U-cubesats which will act as a pair to conduct optical communication experiments, built by the Aerospace Corporation; the ISARA 3U-cubesat which will conduct an integrated solar array/radio antenna experiment for NASA JPL; PROPCUBE-2 a 1U-cubesat built by the US Naval Postgraduate School to carry-out ionospheric research; CHEFSAT a 3U-cuebsat which will test a COTS radio system for potential future use, built by the Naval Research Laboratory and ASGARDIA 1 a 2U-cubesat carrying a 512 Gb SSD for the global “space nation” Asgardia. The two other payloads taken on-board the ISS for later deployment from the Japanese Kibo-module are ECAMSAT, a 6U-cubesat carrying an experiment to study the effects of antibiotics in microgravity for NASA Ames and TECHEDSAT 6, a 3.5U-cubesat also built by NASA Ames to test a de-orbit system which will make use of aerodynamic forces.