The complicated multi-parachute landing system for the European Space Agency’s ExoMars landing mission in 2020 is under scrutiny after it failed a second test. The test on 5 August, of the large 35 m diameter subsonic main parachute was deemed a failure. It apparently suffered significant rip damage, preventing its full deployment, which left the drogue pilot chute to provide what it could of the aerodynamic braking.

Similar rip problems beset the 28 May test drop from 29 km altitude of both the large supersonic and the larger subsonic main parachutes, which are designed to slow the lander to the Martian surface. In that test, the parachutes, while damaged, did at least inflate properly at the right point to provide sufficient braking. Nevertheless, remedial measures were introduced – albeit not apparently satisfactory ones.

The drop tests from high altitude were conducted over Northern Sweden. Both main parachutes are manufactured by the Italian firm Arescosmos. If the next parachute drop tests fail, the concern is that the mission will be delayed from its July-August 2020 Proton launched trajectory window and have to wait another two years for its passage to Mars. The ExoMars lander, which has been successfully preceded by the ExoMars Trace Gas Orbiter mission, is also carrying a Mars rover. 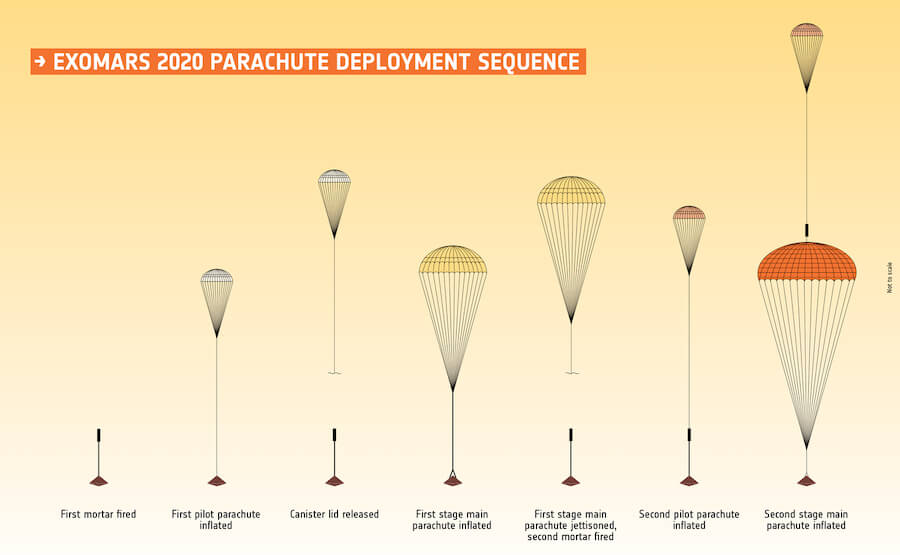