A Proton M/Briz M vehicle was launched at 1017 GMT on 9 October from Baikonur Cosmodrome near Tyuratam in Kazakhstan. The vehicle was carrying two satellite payloads into a super-synchronous transfer orbit on their way to the geostationary arc. While the apogee of a super-synchronous transfer orbits means that fuel has to be used to reduce it to the standard 36,000 km of geostationary orbits during “circularisation”, their otherwise very high apogees – in this case 65,000 km – offer much greater fuel efficiency as they are in a better place to reduce the orbital inclination using the spacecraft’s own propulsion system.

The 2,864 kg Eutelsat 5 West B spacecraft is a direct broadcasting communications satellite owned by the commercial satellite operator Eutelsat. As separately reported, this spacecraft was hobbled when its solar array suffered a serious anomaly during deployment – which could incur a major partial or even a total insurance loss.

Of more significant long-term interest, however, was its co-payload, the 2,326 kg MEV-1 (more formally known as the Mission Extension Vehicle 1), which was being launched for Space Logistics LLC, a Northrop Grumman subsidiary. This is the first of a new class of servicing spacecraft in orbit. The MEV-1 is designed to dock with defunct spacecraft via a grapple of its apogee kick motor nozzle, providing the attitude and orbit control functions to extend the mission. In this case the MEV-1 will dock with the Intelsat 901 communications satellite to extend its mission by five years.

The Briz M (Breeze M) upper stage carrying the two spacecraft separated from the third stage and, having carried out its five burn sequence, deployed the two spacecraft successfully into their super-synchronous transfer orbit, albeit one that was subsequently hobbled by a power shortage following the array deployment failure. 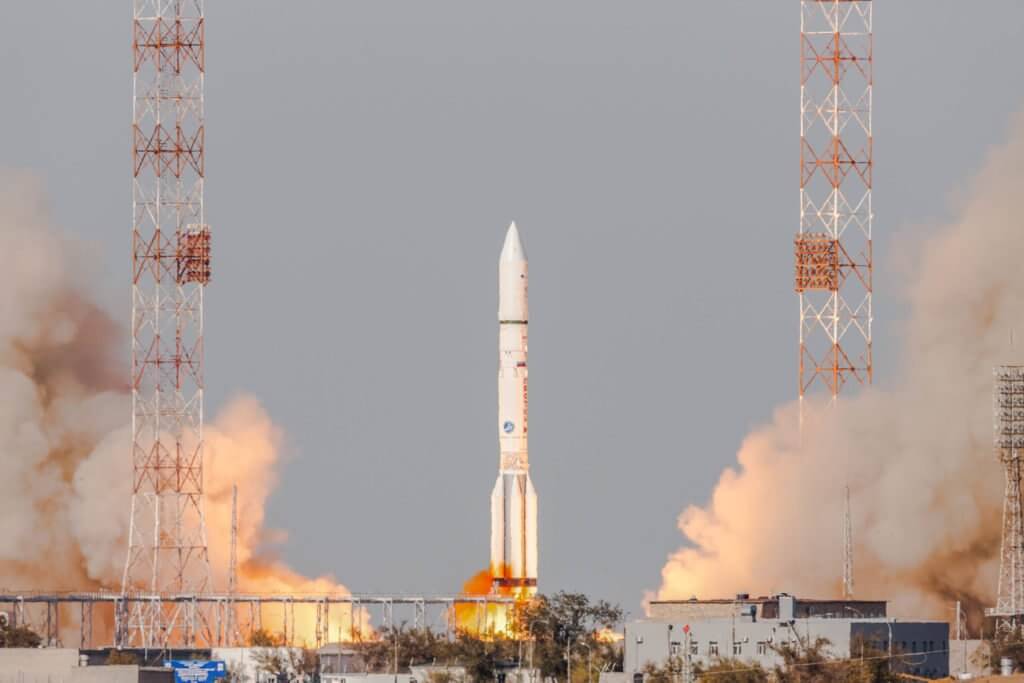 Update on 10 October 2019: While he should have been basking in the success of this commercial launch, Kirk Pysher, President of ILS (International Launch Services), was not around long enough to do so. His resignation – reportedly involuntary – was announced by ILS majority shareholders Khurnichev and Roscosmos the day after the launch. John Palme, ILS Chief Operating Officer, has been named as Pysher’s temporary replacement. It is rumoured that the more permanent replacement will be Tom Tshudy, former ULA Vice President and General Counsel.

During his tenure at ILS, Pysher has had a lot to put up with. For a time, things went well. Proton strung together a series of good launches and a new double-decking concept allowing more than one major satellite to be launched at a time – with the most recent launch as an example – gave the Proton M a new lease of life. Meanwhile, US-based ILS, along with Proton’s manufacturer and ILS’s majority shareholder, Khrunichev, came up with an ingenious plan to cut one of the stages of the Proton M to make it a much more economic launch vehicle. This would have been enough to allow the Proton to get close to the Falcon 9 and Ariane 6 on price. However, this plan was stymied when the Kremlin decided that the limited development funds should be directed to the Angara 1.2 and 5 series and to new versions of Soyuz. Soyuz marketeer Glavkosmos has increased its power within ILS via three board members – a de facto take-over of the marketing of Proton.