In between waiting for his certain re-election, presiding over Russian Air Force’s bombing campaign in Syria, and batting off allegations that the Kremlin is ruthlessly assassinating its opponents and “traitors”, Russia’s President Vladimir Putin has been further cementing his “hard man leading a strong nation” image in front of the Russian general public. He has appeared on Russian state television to show how strong the nation’s nuclear deterrent is, implicitly threatening the USA and its NATO allies.

For nuclear deterrence (or even a nuclear threat) to work successfully, a nuclear warhead delivery system has to guarantee that at least some nuclear warheads will be delivered to an enemy target.  It was the so-called “Moscow-criterion” of having to defeat Moscow’s “Galosh” and “Gazelle” anti-ballistic missile defences in the late 1960s and 1970s, which forced the UK Ministry of Defence to spend so much time and money on developing its Cheveline inflatable balloon decoy system for its submarine launched Polaris nuclear warhead-armed missiles. Meanwhile, the US military concentrated on designing multiple independently targetable re-entry vehicle (MIRV) warheads to similarly split Soviet defensive anti-ballistic missile fire.

However, some fifty years later the boot is on the other foot. Unnerved by the US withdrawal from an agreement to restrict anti-ballistic missile systems and its subsequent deployment of its own interceptor missiles in Alaska, Russia has sought ways to get round these new US ballistic missile defences in order to guarantee a successful nuclear strike in the event of all out war.  Russian President Vladimir Putin thus mentioned three new classes of weapons to do this in his televised equivalent of the US State of the Union address.

The first of these is a new nuclear armed hypersonic missile warhead called Avanguard which Putin claims is so manoeuvrable that nothing can intercept it.  This hypersonic glide vehicle is akin to a very advanced and highly agile MIRV.  While likely to have a large thermal signature (due to its atmospheric friction wake) which Infra-red tracking satellites would soon pick up, such is its speed and manoeuvrability that interceptor aircraft and missiles would struggle to engage it.  Such hypersonic glide vehicles would be launched by Russia’s new Sarmat ICBM (Inter-continental Ballistic  missile). Threateningly, Putin also used a video animation in his speech showing how Florida, USA, could be targeted by the Sarmat missile.

The second of Putin’s newly announced weapons is a nuclear powered presumably “stealthy”  cruise missile of unlimited range, would be able to take obscure non-predicable ground hugging paths to a target.

The third weapon, the details of which was accidently released to news media a year or so ago, was of an ultra long range very large torpedo codenamed “Status-6” or “Kanyon” which would be fitted with a nuclear powered engine and also carry a 100 megaton warhead.  At a speed of around 100 knots, this deep diving weapon would be easy to detect (via sound) but hard to intercept on its way to strike a coastal city.

While the two missile systems are fast enough or stealthy enough to have a “first strike” capability, the torpedo is regarded more of a “revenge” weapon given its slow speed.

It is not just these new systems to deliver his nuclear weapons that Putin is apparently proud of. He also announced that the new air-launched hypersonic anti-ship missile called Dagger was almost ready for service – and ready to strike America’s aircraft carriers if needed. 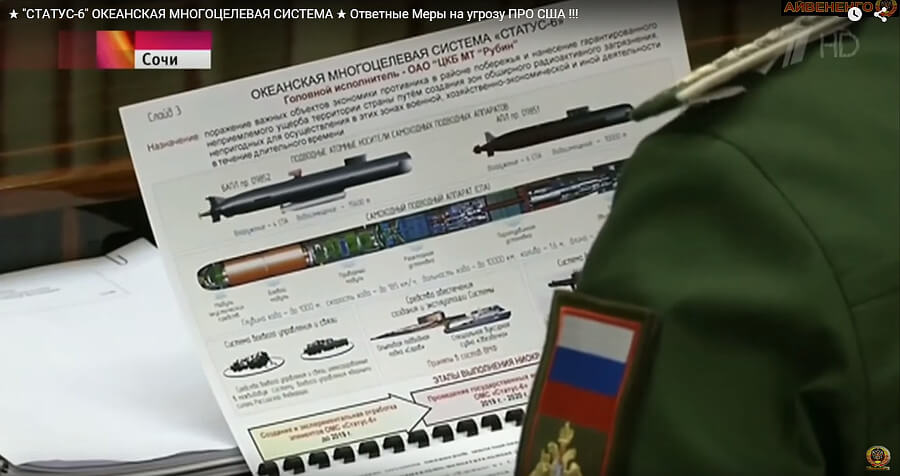