Directed by Damien Chazelle and starring Ryan Gosling, First Man (2018) shows that Apollo 11 astronaut Neil Armstrong was a thoughtful, intelligent, cool-under-fire hero – but one who was also racked by personal sadness. The film was written by Josh Singer with the screenplay derived from a biography by James R. Hansen.

This good-looking national hero only rose to national and world consciousness because he was chosen to be the first man to walk on the Moon. Armstrong was, of course, not chosen for his baby-face looks which were easier on the eye than Buzz Aldrin’s. By the way, good looking as he was, Armstrong’s round face, was different to the narrow-face of Ryan Gosling. Neither was it for his piloting skills – good as Armstrong was, other test pilots and astronauts were rated better. Nor was it entirely due to his public relations-friendly “civilian” astronaut status – although this did count for him. But rather, it was because of his ability to keep calm under fire and take the right decision or action when it really counted.

This biopic of the “exciting” part of Neil Armstrong’s career shows him doing this time after time – and surviving when he really should have died. We see him struggling with the X-15 rocket plane’s controls as a test pilot, nearly getting killed in the Gemini 8 post-Agena docking spin emergency (a dizzying terror-inducing experience) and making a near fatal ejection seat escape from a crashing test lander. Each time Armstrong comes away more or less unscathed, and not fretting too much about the near-disaster that came close to taking his life.

The film culminates with his (and Buzz Aldrin’s) eventual landing on the Moon and that famous first Moon walk. These are probably the most interesting scenes for space cadets as it shows what Armstrong mush have seen during his computer-warning-ridden approach. It was, of course, (spoiler alert) his quick thinking that prevented a disastrous crash landing in a boulder-strewn crater.

Armstrong was a quietly thoughtful man, which Gosling gets very right – but Gosling also portrays him, correctly, as having a secret emotional side as well. Actually, quiet as he was, Armstrong fitted the role of hero well, being blessed with both skill and luck, and his crewmates were often grateful to him for saving them as he saved himself.

Some of his astronaut colleagues were not so fortunate. Three of his friends were killed in the Apollo 1 fire (shown) while two others crashed their T-38 jet (off screen). Although Armstrong avoided his own demise and destruction, he did have to weather these deaths. In fact, the core of this film is the way he and his family and friends cope with their fear, grief and guilt as others die.

Armstrong also had to contend with a worse mental anguish. Before he joined the astronaut corps, he and his wife had to watch their darling little girl Karen succumb to a brain tumour at the age of only two.

Despite the underlying fearful, maudlin and mournful notes of the film, there are actually a few humorous moments – the highlight being the vomit-inducing machine that checked the astronauts’ three axis-control capabilities in a multi-dimensional spin. Armstrong would need this skill later in his Gemini 8 escape. 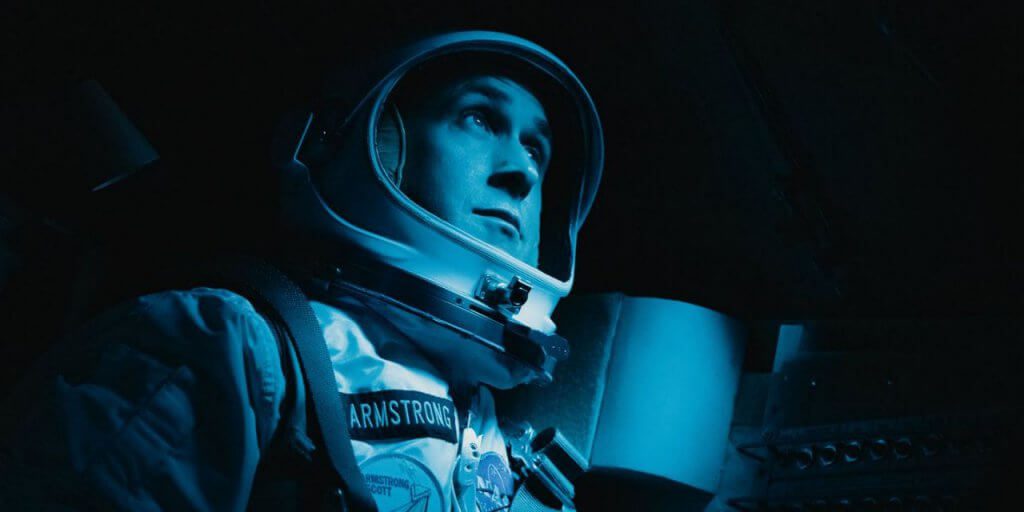 Although mainly technically correct, this movie had some noticeable historical omissions. While it is accepted that this is not a full history of Project Apollo, there should at least been a mention of Apollo 8’s ground-breaking first lunar round trip. Apart from a few too many clouds being visible on the X-15 flight, the only significant technical error on display was having the astronauts looking out of the capsule window at the sky during the Apollo launches. While correct for Gemini, Apollo’s windows would have been fully covered for most of the launch by the protective shroud until it was jettisoned at high altitude.

Armstrong’s crewmate Buzz Aldrin is rightly characterised as being a then inconsiderate type (by the way, he is a lot nicer today). However, it fails to mention Aldrin’s hidden drink dependency or his vaingloriously political attempt to be chosen as first man on the lunar surface.

Another stylistic issue is portraying the Moon as silent for the astronauts. This it technically is in the vacuum outside their spacesuits. But with so much to do and with Houston calling in via their helmet radios every few seconds or so, there was little time for silence and reflection. Nevertheless, Armstrong did have a brief quiet moment near a crater, and the film suggests that he left a bracelet carrying the name of daughter Karen there, as a memorial to her.

Nevertheless, despite these quibbles, the film remains a touching tribute – not so much to Armstrong himself – but rather to both him AND his long-suffering wife Janet, excellently played by Claire Foy. She tried her best to keep her taciturn, emotion-hiding man on the road and her family stable while facing up to the dangers that her husband’s career involved. In one notable scene, she even has to order Neil to tell his boys that there was a risk of him not coming back. Unsurprisingly, their marriage did eventually founder – albeit 25 years later. However, you can still see the love and respect each must have had for each other at that traumatic time.

While the film also addresses the concerns about the cost of the US space programme, it soundly comes to the conclusion that Neil Armstrong’s flight was well worthwhile and that he was a credit to America.

At the very least this film might silence some of those dim-witted lunar landing deniers. And for those moaners who complained that there was not enough of the US flag shown on the Moon or enough patriotism on display, in truth both are here in this movie. But you have to look for them.

Seradata Rating: 7 out of 10. A touching reflection of the tension and emotion for all concerned at the dangerous sharp end of NASA’s space programme during that exciting time in the 1960s. Worth seeing if you are a space cadet (add an extra mark if you are one of those) but don’t take any superhero CGI-action-addicted kids as they will soon get bored by the “real life” angst of true space heroes.

POST SCRIPT: A late review of Solo (2018) which has villains all round, but it is Paul Bettany who steals it

While this writer missed it first time round, he has just seen Solo (2018) on a pay-per-view basis on TV.  Directed by Ron Howard, this Disney-made film is officially called Solo: A Star Wars Story (2018) and it is a prequel to that famous sci-fi adventure series showing just how Han Solo came to be Han Solo and how he met his friends Chewbacca and Lando Calrissian, and his spaceship, the Millennium Falcon. 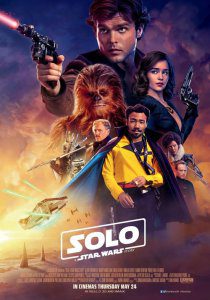 Alden Ehrenreich is in the starring role and he plays our hero well – but he really ought to shorten his name in future if he wants top billing. Actress Emilia Clarke provides the pained love interest reminding one of Brit actress Tara Fitzgerald as she does so. And just as Luke Skywalker had his own mentors in his back story, so Woody Harrelson becomes a kind of crooked Bill Sykes-like mentor to young Han.

The plot is slow to start but soon picks up with all the usual CGI action plus some plot twists showing how stealing might actually be a good thing. In fact, this film, via its plot, style and characters does steal a bit from the Guardians of the Galaxy space movie series.

Best performance by a galactic mile is by Paul Bettany in villainous form as a ruthless gangster-like boss character called Dryden Vos.

Seradata rating: 7.5 out of 10. Worth seeing if only to view a higher kind of love with a robot called L3-37 as voiced by Phoebe Waller-Bridge. 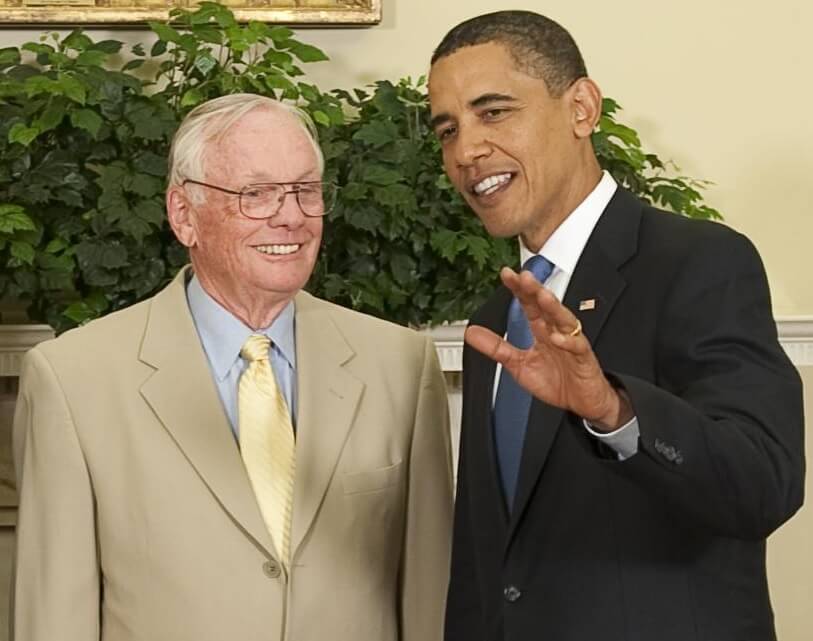 It has been announced that the late Apollo 11 commander , Neil Armstrong, who became famous as the first man Read more