While this column is principally about spaceflight – past aerospace history sometimes features – and the new movie retelling of the “great escape” of British Expeditionary Force (BEF) and French army from the cut off port of Dunkirk in the early part of World War II has this aplenty. Old warbirds (real life Spitfires and Messerschmitt Me 109s, Blenheim and Heinkel He-111 bombers and some computer-generated Junkers Ju-87 Stuka dive bombers) provide a feast for the eyes – with several ship-borne explosions providing a similarly large helping for the ears.

Directed, written and co-produced by Christopher Nolan, the film has three strands of storyline: the poor British soldiers stuck on the beaches in late May and early June 1940; the brave but unfairly discredited Royal Air Force (RAF) Spitfire pilots doing their bit to defend them; and those hero civilian volunteers who took their 700 or so “little ships” into harm’s way. These fictionalised-for-effect stories, resting on the back of actual events, are slowly wound together in a tense battle for survival – one that makes you feel as if you are really there.

Stars, sirens and shots all around

Yes – it is star studded – ranging from award winning classical actors such as Kenneth Branagh and Mark Rylance holding up the quality end, to teen idol types such as acting newcomer Harry Styles providing surprisingly solid performances. In between are quality players such as Fionn Whitehead, Cillian Murphy and Tom Hardy, with several others making cameo appearances, or even a cameo voice in the case of Michael Caine.  He provides the voice of an RAF radio controller, acting as as a nod to the excellent Battle of Britain (1969) film in which he starred in as a Spitfire pilot.

Thick and fast comes the action, with the terrifying Jericho-trumpet siren whine of the Stuka dive bombers interspersed with Hans Zimmer’s urgent score which has undercurrents of Elgar’s Nimrod. The Germans are the largely unseen enemy – save for their fighters and bombers. bullets and torpedoes, which constantly kill and maim those fearful British (and French) soldiers and sailors stuck on Dunkirk’s “mole” pier or on its beaches, or on the nearby ships.

Most critics have raved about the explosive action sequences and acting performances in this part-fictionalised tale written by Nolan himself.

Watch out for the errors – and then ignore them

Yes –  there are a few technical inaccuracies: some of the French supplied warships have a little too much post-war kit on them to be 1940 vintage, while some of the beachfront’s buildings look very modern indeed.

By the way, the German Me109 aircraft themselves are slightly incorrect. The film uses post-war Spanish versions powered by British Merlin engines!

Meanwhile the yellow paintwork on the noses of the Luftwaffe’s (German Air Force’s) Messerschmitt Me109s did not appear until the start of the Battle of Britain in July 1940.

Similarly, the improved Mark IV type of goggles – the first of the famous “side-pane” types – as worn by Tom Hardy’s Spitfire pilot character, were not really available yet. For while they were officially released in June, they were not really used until the tail end of the Battle of Britain in the Autumn of 1940. 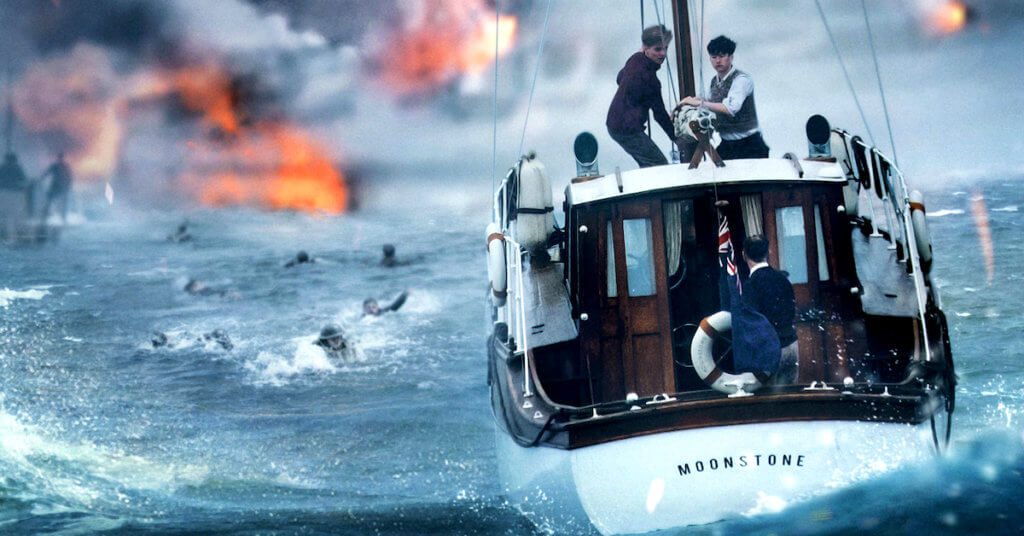 With respect to the easily seen low level RAF versus Luftwaffe dogfights depicted, actually, these were much less visible, either because they were at much higher altitudes, or away from the coast altogether: either inland or over the Channel. Thus, as the British soldiers and sailors at Dunkirk were being bombed by the Luftwaffe with no apparent RAF fighter opposition, the RAF was soon dubbed, the “Royal Absent Force.”

Of course, the RAF’s “Brylcreem boys” did do their bit and did get shot down, in spite of the Spitfire’s excellence as it made its debut in a major air battle. However, their splashdowns in the channel were unlike the gentle flat Channel-ditching sequences portrayed. In truth, if they did not crash-dive to explode into smithereens, a Spitfire usually pitched downwards on splashing down with its tail pointing upwards as its heavy engine and propeller sank first.

However, at least the British Merlin-powered Spitfires are mainly of the right mark (Mk 1a) – even if the cameraman failed to show “deflection shooting” properly in the dog fights (you have to put the fixed reflector gun sight slightly ahead of the passing target aircraft to get your bullets into it).

Having noted these minor technical faults and criticisms, it has to be said that the majority of the critics are right: it is an otherwise excellent film.

A few military historians have complained that Nolan sidelined Vice Admiral Ramsey’s planning achievement of the “Operation Dynamo” evacuation, as also is the newly appointed British Prime Minister, Winston Churchill.  Actually Ramsey does make an incorrectly located appearance on Dunkirk’s mole quayside during the final stages of the evacuation (actually he stayed in Dover for the whole operation) while Churchill is, at least, verbally referenced at the end.

Of course, the French have moaned that their part was not large enough in the film (they have a point). India has also complained that its small contingent within the BEF was ignored in the film. In fact, there were incredible acts of bravery by both the French and British rear guard units which are, at least, touched upon in this movie, albeit they do appear unrealistically too close to the beaches. Likewise, there is no mention of the evil German reprisal executions perpetrated on some of the captured rear guard soldiers at the end of the operation.

Meanwhile some Russians have claimed (completely unfairly) that the film is a “celebration of British cowardice”. Actually the Soviet Union was in cahoots with Adolf Hitler at the time! Well, until he turned on them the following year!

Of the official film critics, while some had a few criticisms mainly of its flitting multi-story style, the Dunkirk film’s only really serious detractor was the Irish writer Kevin Maher. He stated in The Times (of London) that while Nolan’s picture is a welcome fix to an absence of Dunkirk-related films, its noise and spectacle make it feel more like a “Call of Duty” video game than a proper story. He duly gave it only a miserly two stars out of five (equivalent 4 out of 10).

Perhaps Maher’s Irish descent makes him none too keen on the good-versus-evil fight that was World War II, one in which Ireland remained embarrassingly neutral. Mind you, Mayer could have a point with his main complaint: there really is a lot of spectacle and sound in this motion picture which does detract a little from the emotional storyline.

Nevertheless, Maher is certainly wrong to say that the Dunkirk retreat and evacuation had not really been covered on film before. Actually, the film director Leslie Norman, father of the late film critic Barry Norman, made an excellent, again partially fictionalised, retelling of the main events in his Dunkirk (1958) film, which starred John Mills. It is one which actually this writer still slightly prefers.

Nevertheless Nolan’s film is worthwhile as it gives a “feel like you were there” experience in a similar way that Spielberg’s Saving Private Ryan (1998) D-Day story did with its new Cinéma vérité washed-out colour style. And just as that film nicely complimented D-Day’s more historical retelling in the monochrome The Longest Day (1962), so Nolan’s new Dunkirk (1997) movie compliments the original monochrome Dunkirk (1958) which covers the evacuation’s lead up and strategy better. By the way, that excellent older film makes good use of Stuka dive bomber footage (no need for computer animations!) and even appears to have more soldiers on the beaches!

On that note, there is a lot more that could and should have been included in this film. For example, a little more time should have been spent showing the brave work that the little ships did in ferrying soldiers from the beaches and its jury-rigged-army-truck pier to the large destroyers off shore. That said, in fact, only about a third of the escaping army got off in this way – the rest boarded destroyers and other large ships from the pier-like mole structure of the harbour. And yes, while the film implies correctly that a large number of the large ships were sunk, in reality most actually got away safely, albeit mainly under the cover of night.

Likewise, this military history aficionado would have liked to have seen a bit more about the campaign before Dunkirk, not least, how Hitler’s Panzers (tanks) managed to “Blitzkrieg” their way, via the Ardennes and Sedan, to the French coast to cut off the British and French armies in the first place.

Or how, for a time, the British side’s initially successful counter-attack at Arras with their nearly impenetrable Matilda I and II tanks, even managed to put the wind up genius German general Erwin “The Desert Fox” Rommel as it nearly killed him. For while the BEF advance was eventually stopped by Rommel’s realisation that his 88mm anti-aircraft guns were also excellent in the anti-tank role, it was an action which caused alarm in Nazi high command. And one which might have been the reason behind Hitler’s bizarrely mistaken order to halt the German Panzer (tank) advance on Dunkirk.

“Feel like you were there” style puts fear into you

Nevertheless, these historical omissions aside, at the very least, Nolan’s action-packed retelling of the “miracle of Dunkirk” will allow younger audiences to realise just how lucky they are to be waiting in the school lunch queue, rather than in one waiting for rescue from Dunkirk’s deadly beaches.

Dunkirk (2017) also lets this key event be appreciated for what it was: a war-saving and even war-winning miracle that let an army of over 350,000 (mainly) men escape with their lives, even if most of their heavy weapons and rear guard comrades had to be left behind. For it was this the Dunkirk evacuation, along with the subsequent victory in the Battle of Britain air campaign, which let Britain stay in the war, and, in doing so, allowed the later successful allied D-Day invasion of Normandy to take place in June 1944.

Seradata Rating: 8 out of 10. Recommended.

An excellent “feel like you were there” tribute to the men and machines at Dunkirk. This action-orientated movie is an excellent and exciting addition to the war film genre, and a rare one which lets British armed forces take centre stage for a change. Mind you, the black and white 1958 Dunkirk original which took that year’s UK box office top spot, remains a more historically accurate and better account.