This year’s Rispace – Reinventing Space – conference, which was held in London in November, had a blend of keynote speakers and technical presentations covering everything from satellite servicing to space debris. Unlike the overstuffed International Astronautical Congress, it only had a single strand of lectures to go to, leaving you with no nagging feeling that you are missing something. For a small UK-based conference it does well to attract the big players, with speakers from NASA, JAXA, Airbus DS, Aerojet Rocketdyne, Northrop Grumman, Raytheon and the Planetary Society. That is not to say the “big guns” had all the best presentations.  Some of the smaller outfits were often better – but not always.

Some speakers were obviously brilliant presenters but had very little to say at all (no names here to save their embarrassment), other presenters were long and boring – selfishly eating into other speakers’ time – but nevertheless had some excellent points to make.

For example, Alex Ellery of the Carleton University’s lecture may have been overly detailed but it came up with the important conclusion that when it comes to mining and extracting minerals the Moon is much superior location than the asteroids.  Not only were the Moon’s minerals more accessible in terms of quantity and location, they would be more easy to extract given there was at least enough gravity on the Moon to do it. 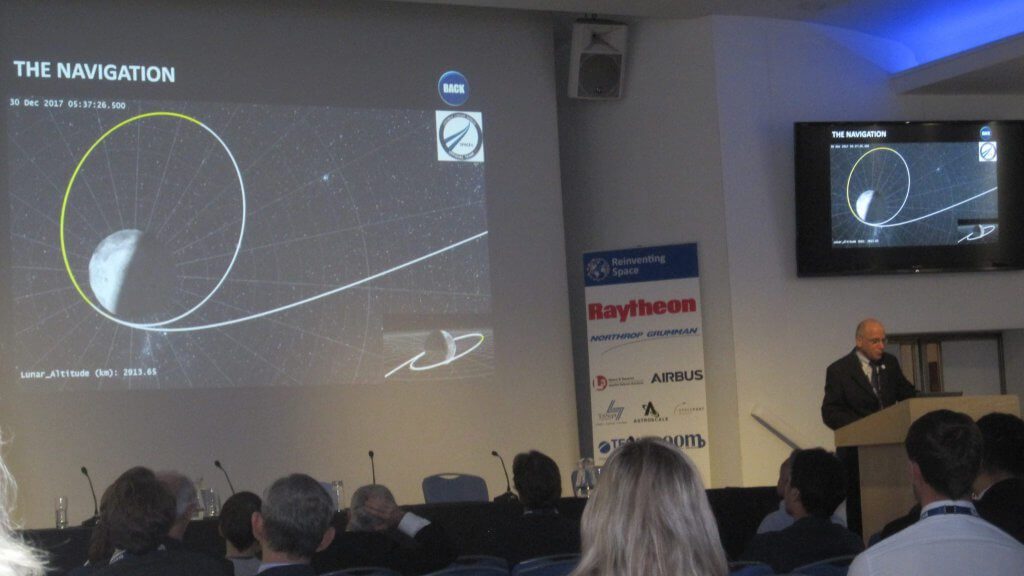 The Moon of course came up in the keynote lecture by Ido Anteby, CEO of the Israel-based SpaceIL. He described how the firm’s planned lunar lander had done away with much of its redundancy in the name of saving weight and simplicity  This US$90 million lander will use doppler readings via a laser landing sensor to control its approach and landing.

The spacecraft will be launched in January next year as a piggyback on a GTO flight, from where it will raise itself slowly to reach the Moon. There it will send back imagery as well as magnetometer readings on behalf of NASA.

While there some doubt the wisdom of investing in some space enterprises, Peter Blacker of the University of Surrey, noted that investing in structures on the Moon would make them a permanent investment compared compared to the more transient existences of eventually deorbited spacecraft in orbit.  This made the Moon, whether for mining or space tourism, a much more attractive investment.

On the launch vehicle front, NASA’s Renee Cox and Ryoma Yamashiro made interesting presentations on the state of play with respect to their SLS heavy lift and Epsilon (somewhat lighter lift) launch vehicles respectively.  Renee Cox explained that, with four times as much volume as any other currently flying launch vehicle,  the administration looks forward to carrying cargo as well as crewed Orion spacecraft on the SLS. She noted that the contract for the SLS Universal Stage Adaptor had just been awarded to Dynetics. In fact, the third flight of the SLS Block I (after EM-1 and EM-2) will be a “cargo” mission – well actually the unmanned Europa Clipper probe mission.

The somewhat smaller Epsilon remains a costly rocket on a per kg basis but can carry 600kg to Sun-synchronous orbit and has two launches already booked – one for the ASNARO-2 Earth observation satellite, and a multi-satellite mission for seven small satellites. 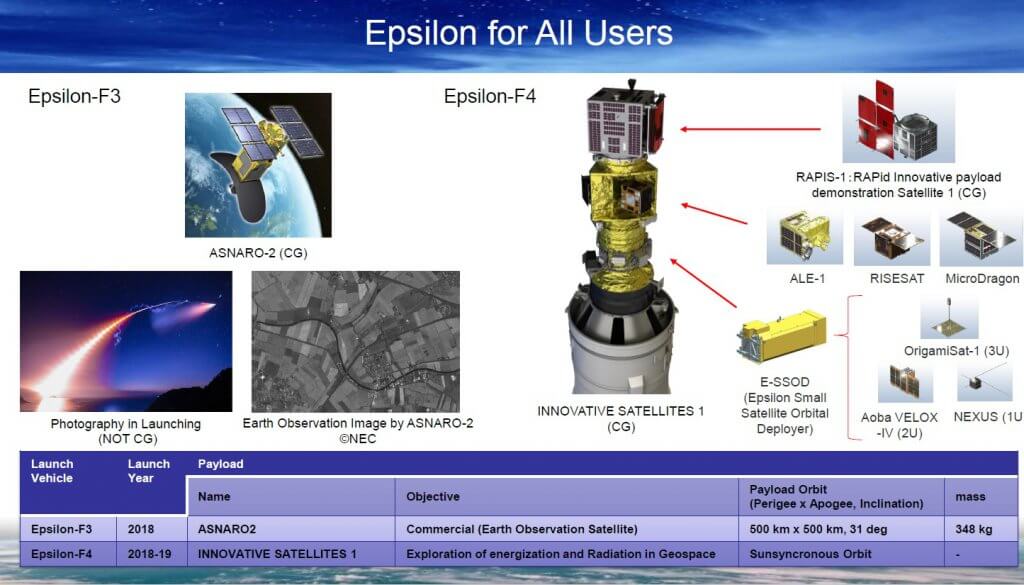 The next two flight bookings on Epsilon. Courtesy: JAXA

After the recent Soyuz FG failure which forced the escape of the Soyuz MS-10 crew, GK Launch Services’ Mila Savelyeva was obviously keen to get through her lecture as fast as she could – given that the conclusion of the failure investigation were only just being released.  She did, however, indicate that a Soyuz 2 might be operated as a launch vehicle to Sun-synchronous orbit without a Fregat upper stage.  In this way, the launch price could come down from its nominal US$48.5 million to just US$35 million.

With respect to future rockets, Robin Hague of UK start-up launch provider Skyrora noted that the firm’s engine test programme is going forward with initial tests of their pressure fed 3.5 kN Skyforce rocket engine which is powered by Hydrogen Peroxide and Ecosene (a plastic-derived kerosene).  The firm plans to move to more powerful turbopump fed engines later for its orbit capable Skyrora XL with which it hopes to put 300 kg payloads into Sun-synchronous low Earth orbits. That said, even the very early engine has its first external customer – for the SkyHy suborbital rocket for an external customer – beating the firm’s own suborbital type.

While Skyrora is on its way – start up rocket companies are prone to failure or prone to excessively long developments – one outfit that is having one of those is Rocketplane Global.  Chuck Lauer noted its plan which involves refuelling – actually reoxiderising – a runway-launched hypersonic winged launch vehicle via a DC-10 “Omega” tanker aircraft carrying liquid oxygen.  One wonders wheter the hose nozzle will get frozen onto the female receptor if LOx is involved.  The system is planned to launch up to 2000 kg to Sun-synchronous low Earth orbit for less than US$10,000 per kg.

When it comes to a UK launcher, whether it is a Skyrora or a Lockheed Martin-modified PlanetLab Electron rocket,  Vadmin Zakirov of Commercial Space Technologies explained that his firm’s analysis had shown a UK launch vehicle would not initially face much competition, but that later it would have to lower its launch price to stay competitive. As CST examined the potential market, they concluded that that it would be cubesats and payloads in the 100-225 kg size which would most need a launch, and that those in between would be strangely missing.

One other surprising conclusion from the CST analysis was that once three launch competitors to a UK launcher had arrived in the market, anymore would not be any more deleterious to a UK launcher’s competitive position.

Robin Brand,  quoting from the British Interplanetary Society’s own study, doubted the wisdom from launching from the Sutherland Space port, noting that any near-polar heading orbital launch flightpath is likely to fly over the high value assets (and people) of certain oil fields. Some in the audience expressed doubts about the kindness (or lack thereof) of Scottish weather.  Brand also expressed doubts about the market for such a vehicle given the growth of ridesharing options for larger rockets.

Some of the lectures and panels covered in orbit servicing.  Joe Anderson of Northrop Grumman defended the concept of servicing and mission extension via its MEV spacecraft as damaging to the launch market by saying that these servicing spacecraft  would themselves need launches.  While conceding that space operators would most likely want the latest technology on their latest comsats, he did see a niche for a mission extended satellite being used test out a market or orbital location before a firm risked a large capital outlay on a brand new state-of-the-art communications spacecraft.

There are of course, other more malevolent uses other than space servicing, that closely rendezvousing spacecraft can get up to. The keynote lecture by military space consultant, Russ Matijevich, cleverly used the spacecraft eating another spacecraft scenes out of the James Bond classic You Only Live Twice (1967) to illustrate the danger of spacecraft being able to rendezvous dangerously close to each other.  Mind you, he failed to mention that in that film it was China that was financing SPECTRE’s evil operation.  And there was the point.  As Matijevic called for an internationally agreed set of rules for military rendezvous and inspection satellites, getting China to admit that even does anything military in space would be the difficulty.

In some ways, more interesting (and possibly more viable) was Northrop Grumman’s project to convert a small spacecraft adaptor called Eagle into a upper stage-like delivery vehicle. The ESPA-Star vehicle was described Northrop Grumman’s Tim Rumford.  With a design life of three years and a power of 1.2kW it had the ability to drop off specially designed 110 kg mass 70 W power ESPASats in whatever location in GEO was required.  ESPAStar 1 and two are to be launched in 2020.

In the field of antenna technologies, while parabolic dish types of 18m or so have been built by Harris et al and used in real spacecraft,  others mused that even larger ones will be needed if GEO comms are to be accessible via small omnidirectional antennas on the ground. So the VASANT (Vast Satcom ANTenna) programme has been started by Airbus Defence and Space (Airbus DS) as it examines the possibility off building  antennas of up to 100m in orbit.   Matthew Stuttard of Airbus DS noted that these might have to be built in orbit given fairing limitations on size.  Nevertheless a signal gain of 75 dBi might be possible with upto 5000 beams in a Ka-band footprint possible, if these proved to be technically feasible to be built.  Stuttard would not be drawn on whether such a VASANT would be a parabolic dish or electronically steered phased array type.

When it comes to small rocket engines as the world attempts to replace its very poisonous hydrazine based thrusters a hunt is on for greener safer fuels.  One possibility would be to use electrolysed water in an electric ion thruster.  According to Alexander Schwertheim, a PhD student at Imperial College, the trick apparently is to use the hydrogen to stop the oxygen “poisoning” the surface of the cathode.

Perhaps the most enlightening presentation of Rispace was the excellent lecture made by former aerospace lecturer and former British Interplanetary Society president Mark Hempsell who noted that the danger to Geostationary satellites was not being considered enough – especially given naturally produced local concentrations in parts of the GEO orbital arc and in the graveyard orbits.  For while the strike velocities would not be as high as those involving crossing low Earth orbit objects, they could still reach significant speeds.  As it was he showed that debris, even at slow speeds could be hazardous to a GEO spacecraft.  Citing the incident to AMC-9 on 17 June 2017 that chopped its telemetry and caused a shedding of its debris,  it became apparent from an analysis of its resulting velocity and momentum change that a large object had struck the -z face of the AMC-9 space craft at the relatively lowly speed of about 100km per hour.

Dr Philip Blondel of the University of Bath, might have the answer at least to debris detection in GEO (which is infamously hard to do from Earth).  He is working on a multi-static imaging technique which uses space based radar transmitters. He suggested that after initial tests in LEO the technique which would use reflections and backscattering to monitor the size and shape of debris, would be easily applicable to GEO.