Russian cosmonaut and ISS Commander Oleg Artemyev and ESA astronaut Flight Engineer Samantha Cristoforetti made a spacewalk together on 21 July. This was the sixth excursion outside the ISS so far this year and a rare Russian/European joint EVA (Extra Vehicular Activity). They began their EVA when they opened the Poisk module airlock at 1450 GMT. 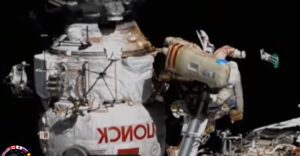 The third of 10 nanosatellites deployed during the spacewalk. Courtesy of NASA TV.

Crisoforetti was in a Russian Orlan spacesuit while US spacesuits remain unavailable for all but emergency spacewalks. This is only until checks have been completed after a report that Matthias Maurer’s visor was coated with a thin layer of water in a US suit during his March EVA.

Their mission objective was to continue installing platforms and workstation adapter hardware near the 37-foot-long European robotic arm attached to the Nauka module. This was the third spacewalk to activate the arm and prepare it for future operations.

During the EVA the spacewalkers also released 10 nanosatellites – the highest number of small spacecraft to be launched during a single spacewalk. Six Yuzghu-55 (Radioskaf) nanosatellites were delivered to the ISS by Progress MS-19 (which docked on 17 February 2022) and four (two Yuzghu-55 and two Tsiolkovsky-Ryazan) were on board Progress MS-20 (which docked on 3 June 2022).

The planned activity to extend a Strela telescoping boom from Zarya to Poisk was postponed to the next EVA. Russian mission controllers called an end to the spacewalk, which had started later than planned due to a 40-minute delay in suiting up. The hatch was closed after 7 hours and 5 minutes at 2255 GMT.
This was the sixth EVA for Artemyev and Cristoforetti’s first spacewalk.