In snowy conditions, a Russian Soyuz 2-1b has launched the Lotos-S 5 electronic intelligence satellite into low Earth orbit at 2045 GMT on 2 February from the Plesetsk Cosmodrome in Northern Russia. The satellite, which has now been given the military codename Cosmos 2549 (Kosmos 2549), was initially deployed into a 899 x 240 km orbit inclined at 67 degrees. This was just a parking orbit from where it will raise its perigee to its planned operational 900 km circular orbit. 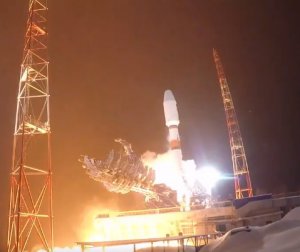 Freeze frame from video provided of Soyuz 2-1b launch of Comsos 2549. Courtesy: Roscosmos via Twitter