As the old joke goes: there are three types of people in this world…those that can count and those that can’t. One who certainly can is the African-American mathematician and human “computer” Katherine Colemon Goble Johnson who became key contributor to NASA’s early human space programme as she calculated the orbits and re-entry trajectories for the Mercury and Apollo missions  She did this while having to work under the endemic racism and racial segregation which pervaded US society of the late 1950s and early 1960s including at NASA’s Langley facility where she worked. As such, Seradata gives its congratulations to Katherine Johnson, both for her past achievements, but especially to her for reaching her 100th Birthday on 26 August 2018. 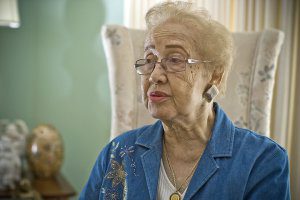 Johnson became famous for her achievements late in her life after her life story was portrayed in the lauded film Hidden Figures (2016).  While it does lean on dramatic licence to force some tension into the story (the mission control scene at Langley is especially suspect) overall the movie is a truthful retelling of how the human computers became key personnel in NASA’s early space programme.

Comment by David Todd: The achievements of Johnson and her workmates, and the Hidden Figures (2016) movie that portrayed them, has probably done more for the appreciation of the talents of the African-American workforce than divisive positive discrimination policies ever can.  We recommend Hidden Figures (2016).