Astronauts Shane Kimbrough and Peggy Whitson conducted an Extra Vehicular Activity (more commonly known as a spacewalk) on 30 September with depressurisation of the airlock taking place at 1128 GMT (all times via Jonathan McDowell) with repressurisation happening seven hours four minutes later. During their spacewalk Whitson took the spacewalk total duration record for a female astronaut.

The pair’s work schedule included making more changes to prepare for the installation of a new docking port and installing an upgraded computer relay box. 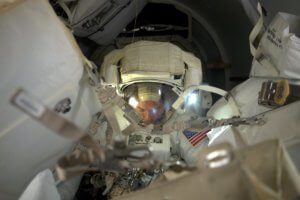 During their modifications to the NODE 3 port on the Tranquility module, the astronauts installed a micrometeorid shield on the currently free Node 3 where the PMA-3 had been attached. However, during another of the shield installations, the Axial shield 1 accidently came free and floated off into space.

While this is technically a debris hazard, its orbit will naturally decay to re-enter earth’s atmosphere within a few months due to the small amount of atmospheric drag at Space Station altitudes, slowing the cover down below orbital velocity. To make amends for the lost shield, the astronauts improvised and used cable and clamps to instal a fabric cover that they had just removed from the PMA-3 docking port extension.  That had his own new shields installed.

Update on 13 April 2017: With Roscosmos’ agreement, NASA astronaut Peggy Whitson has had her stay on the ISS extended by three months.