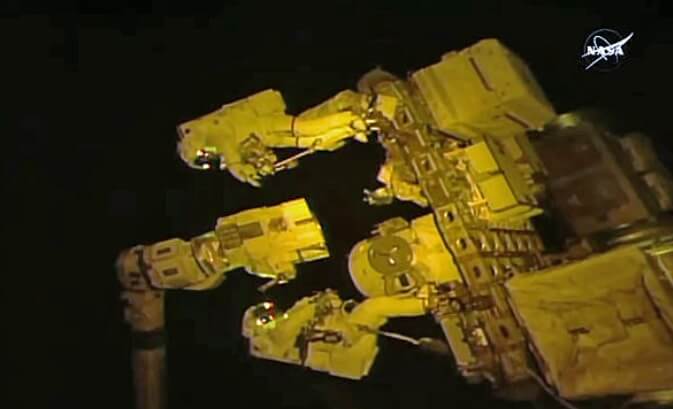 NASA astronauts Mark Vande Hei and Scott Tingle performed a spacewalk  to replace a “latching end effector” (LEE-B) on the end of the International Space Station’s (ISS) robot arm. The extra vehicular activity – the formal name of a spacewalk –  began at 1145 GMT on 22 January 2018 with depressurisation of the airlock and lasted for over seven hours. The LEE-B was replaced at one end of the arm (the LEE-A has previously been replaced in October last year at the other end). The spacewalk ended with repressurisation at 1913 GMT on 23 January.

Update on 29 January 2018: There is a reported fault to the newly fitted LEE-B. NASA engineers believe that a software work around can solve the problem until another latching end effector can be attached.

The astronauts sometimes had to work in the dark during the LEE-B change out. Courtesy: NASA TV via CBS News