On 23 March, the International Space Station (ISS) Quest airlock was depressurised and Expedition 66 Flight Engineers Raja Chari, of NASA, and Matthias Maurer, of ESA, opened the hatch at 1232 GMT to begin a spacewalk (US EVA-80) to make modifications to the radiator cooling system. This was the 248th spacewalk in ISS history and the third EVA so far this year. Astronaut Chari was making his second spacewalk, having worked with astronaut Kayla Barron on installing the “mod-kit’ on 15 March, and it was Maurer’s first.

The primary objective was to install hoses on a RBVM (Radiator Beam Valve Module). This routes ammonia through the ISS’s radiators to dissipate the heat generated by the station’s electronics. Each panel has two independent coolant loops, controlled by RBVMs. The station’s radiators are made of honeycomb aluminium panels. In total there are 14 panels on the ISS, each measuring 1.8 by 3 metres. The spacewalkers also installed a power and data cable on the European Bartolomeo instrument platform and replaced one of the space station’s high-definition external cameras. The 6 hour 54 minute EVA was concluded when the astronauts closed the hatch on the Quest airlock and re-pressurised at 1926 GMT. 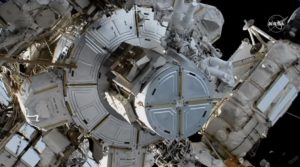 There were some anomalous events during the spacewalk. Shortly after leaving the airlock, Maurer’s helmet camera assembly came loose and Chari had to secure it using wire ties. Once the EVA was concluded and the astronauts were helped out of their suits, Barron reported that Maurer’s helmet contained water. The crew reported that up to 50 per cent of Maurer’s visor was coated with a thin layer of water and an absorption pad within the helmet was damp. Mission control reported that Maurer was never in any danger.

A detailed assessment will be carried out to determine the source of the water in Maurer’s helmet and if any corrective action might be required. NASA will be concerned because of the EVA helmet water leak incident in 2013 which nearly drowned Italian astronaut Luca Parmitano.

Update on 25 March 2022: In a separate event on the ISS, on 24 March, CubeSats IHI-SAT and KITSUNE were deployed from the JAXA deployer J-SSOD (#21) after the Japanese RMS arm extracted the deployer from the Kibo airlock.

David Todd contributed to this article

A launch here, a launch there

Fourth space walk for STS-120 as things get more interesting